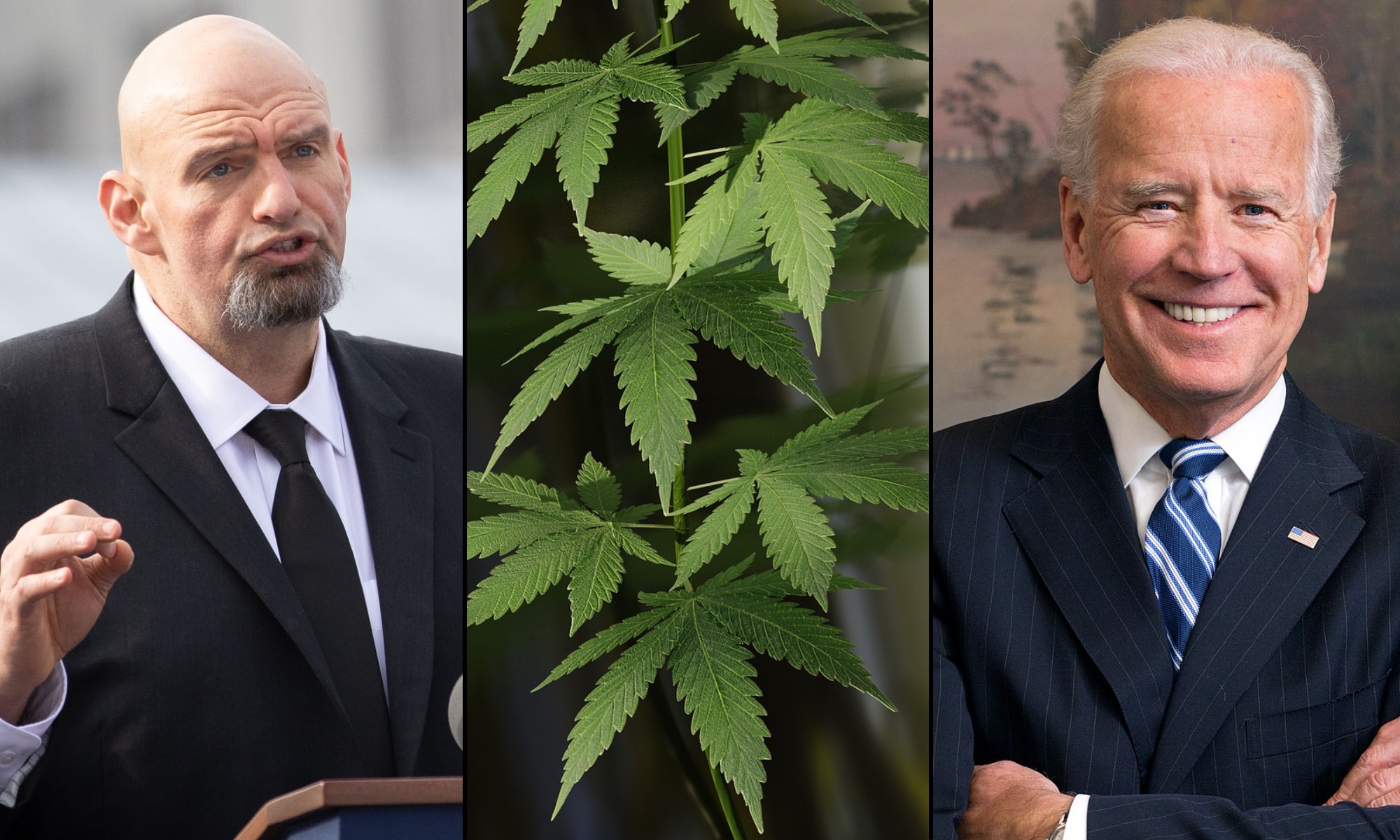 Fetterman, a U.S. Senate candidate and longstanding cannabis legalization advocate, called on Biden to take executive action to decriminalize cannabis days ahead of the meeting. His campaign initially said that he intended to discuss marijuana reform with Biden when they were expected to cross paths at a Labor Day parade. The president did not end up attending the march, but the two met before Biden’s speech at a union hall later in the day.

The Fetterman staffers confirmed to Marijuana Moment that the two elected officials discussed potential changes to marijuana’s status under the Controlled Substances Act.

Fetterman Communications Director Joe Calvello said in a statement that, during their talks, Fetterman “continued to advocate for the President to use his executive authority to begin the process of rescheduling marijuana, so that people convicted of nonviolent offenses can go on with their lives.”

A different spokesperson told Marijuana Moment that the discussion went further and touched on complete “descheduling” of cannabis, which would represent a broader policy change more aligned with the lieutenant governor’s stance than that of the president, who has only expressed support for rescheduling so far.

Without a full readout of the discussion, there are currently few details about the nature of the conversations, including how Biden responded to the Senate candidate’s plea for cannabis action. However, a campaign spokesperson for Fetterman previously said that the state official planned to talk about “the need to finally decriminalize marijuana” at the federal level—a policy that Biden has said he supports but has not yet taken any action on.

White House Press Secretary Karine Jean-Pierre was asked about the Fetterman campaign’s initial statement during a briefing last week. She said that the administration didn’t have “anything to announce” at that point and instead talked generally about the president’s focus on addressing the “addiction and overdose epidemic,” his commitment to “having evidence-based policies in place” and his ongoing belief that people shouldn’t be incarcerated over non-violent drug offenses.

mom and dad, behind the scenes on the trail. ❤️😴 pic.twitter.com/oJuzTuvynH

She pointed to Biden’s clemency actions in April, when he commuted sentences of 75 people, many of whom had non-violent federal drug convictions on their records. But she said there’s no specific update she can share on the president’s plans to reform federal marijuana policy or issue mass clemency for people with cannabis records as he promised to do on the presidential campaign trail.

“As I’ve said before, the president supports leaving decisions regarding legalization for recreational use up to the states, rescheduling cannabis as a Schedule II drug so researchers can study its positive and negative impacts and, at the federal level, he supports decriminalizing marijuana use and automatically expunging any prior criminal records,” she said. “We don’t have anything to announce today at this point but just wanted to lay that out for you.”

Later in the briefing, another reporter followed up by asking Jean-Pierre about Fetterman’s specific ask that Biden use executive authority to decriminalize marijuana, which the Pennsylvania official said he’d hoped the president would do before visiting his state for the Labor Day event. The reporter noted that several U.S. senators have similarly implored Biden to exercise that executive authority.

“Again, we don’t have anything new to share or any announcement to share,” she said. “This is something that he has talked about during the campaign, and you’ve heard from him many other times talking about his drug policy focus and what’s important to him. We just don’t have anything to speak to.”

Of course, Biden did not move to federally decriminalize marijuana before Monday’s meeting.

“He’s going to continue to evaluate further uses of this clemency powers,” the press secretary said last week, echoing a point she’s made at previous briefings. “And as it relates to marijuana decriminalization, we just don’t have anything at this time.”

The reporter asked specifically whether the administration believes that it has the executive authority to unilaterally enact cannabis policy changes like decriminalization, as congressional researchers concluded he does in a 2021 report.

“I’m just not going to get into the specifics. The administration has made progress on its promises regarding marijuana,” Jean-Pierre said, citing the fact that the Drug Enforcement Administration (DEA) authorized additional marijuana manufacturers to supply cannabis for research purposes.

“This is a key step in promoting research because it broadens the amount and quality of cannabis available for research purposes, and we will continue to explore explore what else we can do as far as reforms,”she said. “We just don’t have anything to share with you right now.”

Biden made his first public comments on marijuana issues since taking office after being pressed last month on whether he plans to follow through on his campaign pledge to release people who are incarcerated over non-violent federal cannabis offenses.

The president reiterated at the time that he doesn’t believe people should be locked up over cannabis use, said that his administration is “working on” fulfilling that clemency promise and vaguely alluded to a crime bill that he suggested would address the issue.

The president has received about a dozen letters from lawmakers, advocates, celebrities and people impacted by criminalization to do something about the people who remain behind federal bars over cannabis.

Six senators—including Sens. Elizabeth Warren (D-MA), Bernie Sanders (I-VT) and Cory Booker (D-NJ)—sent a letter to Biden last month to express their frustration over the administration’s “failure” to substantively address the harms of marijuana criminalization and use executive clemency authority to change course.

They said that the administration’s current stance is “harming thousands of Americans, slowing research, and depriving Americans of their ability to use marijuana for medical or other purposes.”

The recently appointed U.S. pardon attorney also recently weighed in on the prospects of mass cannabis clemency, telling Marijuana Moment that her office handles cases independently, but it could be empowered to issue broader commutations or pardons if directed by the president.

At a House Judiciary Committee oversight hearing in May, Chairman Jerrold Nadler (D-NY) and other Democratic lawmakers stressed the need for reforming the federal clemency process, calling for applications to be streamlined to make it easier for people with non-violent federal drug convictions to get relief.

Late last year, a coalition of congressional lawmakers introduced the Fair and Independent Experts in Clemency (FIX Clemency) Act, a bill that would take clemency review away from the Justice Department and instead establish an independent board appointed by the president.

The White House has been asked about the issue several times. Former Press Secretary Jen Psaki had said that the president has “every intention of using his clemency power” and is “looking at” relief for non-violent drug offenders.

Rahul Gupta, director of the Office of National Drug Control Policy (ONDCP), said in June that the Biden administration is “monitoring” states that have legalized marijuana to inform federal policy, recognizing the failures of the current prohibitionist approach.

In the background of these administrative developments, congressional lawmakers have continued to work legislatively to put an end to cannabis criminalization.

Wyden recently conceded that the votes may not be there to pass the wide-ranging legislation, but he said that he remains hopeful that Congress will enact “some key reforms” on cannabis this session.

This has become a consistent talking point since the three senators filed the Cannabis Administration and Opportunity Act (CAOA). The sponsors recognize that political challenges, which is why Schumer has been in talks with bipartisan and bicameral offices about introducing what would effectively be a marijuana omnibus of modest reforms.

The so-called “SAFE Banking Plus” bill, which is still being finalized, is expected to contain provisions to safeguard banks that work with state-legal cannabis businesses, provide pathways for marijuana expungements, promote research into the plant, among other potential proposals. Advocates have also been talking with lawmakers and staff about building on the banking component by incorporating several equity-centric amendments.

For the time being, Senate Democrats are touting one piece of incremental marijuana reform legislation that passed the chamber back in April. The bipartisan bill is meant to streamline the process for scientists who want to access cannabis for research purposes.

That specific legislation hasn’t been enacted into law. But there are hopes that a slightly revised version that was introduced last month could reach the president’s desk in due time. It already cleared the House just days after its filing, and sources say the Senate is expected to act shortly.

If it makes it through the chamber and gets to Biden, who remains opposed to full federal marijuana legalization, it would mark the first piece of standalone marijuana reform legislation to ever become law.

Back in Pennsylvania, a majority of voters (58 percent) support legalization according to the most recent polling, but Fetterman’s Republican gubernatorial opponent known best as Dr. Oz has attacked the official over his cannabis advocacy.

That’s in spite of the fact that, in 2020, Mehmet Oz himself called marijuana “one of the most underused tools in America” and said that the country should “completely change our policy on marijuana.”

Just last week, Oz again took aim at his U.S. Senate opponent over his support for marijuana legalization—but, after being pressed on his past comments on the issue, he conceded that, yes, he’s personally in favor of medical cannabis, saying that it’s a “safer solution” compared to certain prescription drugs like opioids.

Critics, including far-right provocateur Ann Coulter and former U.S. House Speaker New Gingrich, have also taken issue with a cannabis-themed flag that the lieutenant governor hung over his office balcony in Harrisburg. (Coulter falsely suggested that Fetterman deleted a tweet showing him holding the flag in a recent blog post.)

Prior to Wolf endorsing marijuana legalization, Fetterman also led a statewide listening tour to hear what residents had to say about the policy proposal. He touted his role in that tour on his Senate campaign website.

The governor, who signed a medical cannabis expansion bill last year, has repeatedly called for legalization and pressured the Republican-controlled legislature to pursue the reform since coming out in favor of the policy in 2019.

Last year, Wolf pardoned a doctor who was arrested, prosecuted and jailed for growing marijuana that he used to provide relief for his dying wife. That marked his 96th pardon for people with cannabis convictions through an ongoing Expedited Review Program for Non-Violent Marijuana-Related Offenses.