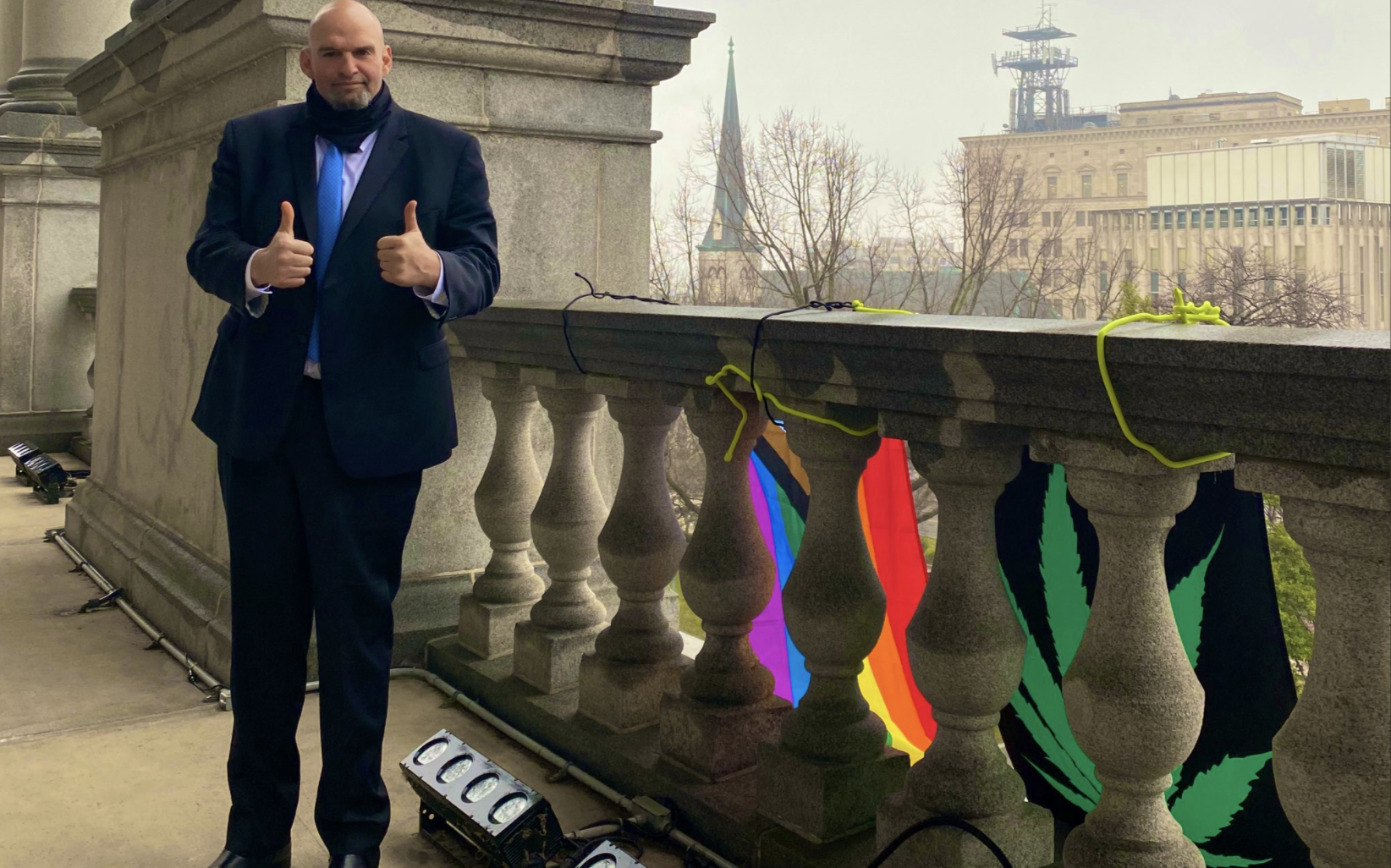 The entire post is premised on the idea that the official is trying to hide a photo he posted in January that shows him cloaked in rainbow flags to support the LGBTIQA+ community while holding a novelty flag with cannabis leaves and the words “DON’T TREAD ON WEED,” a play on the 1775 Gadsden flag that was designed during the American Revolution.

The conservative pundit and self-described polemicist has regularly embraced the drug war and demeaned marijuana consumers. She’s said that cannabis “makes people retarded” and that legalization is “destroying the country.” So it’s not surprising that she’s taken issue with the Democratic gubernatorial candidate’s reform advocacy; however, the post about Fetterman’s flag tweet is flagrantly untrue.

The supporting evidence she used to back up the suggestion about the deleted tweet is a screenshot from Twitter that says “Something went wrong. Try reloading.” It shows the URL for the tweet in question.

All it takes is typing that same URL into a browser to find that the post is, in fact, still online. And, again, no surprise there: Fetterman is campaigning on a promise to bring his marijuana legalization advocacy to Capitol Hill if he’s elected over his Republican opponent, the TV personality known best as Dr. Oz.

It’s not clear why Coulter got an error when trying to access Fetterman’s tweet—Twitter often displays messages like the one above when a user’s browser has trouble connecting to the internet—or why she does not appear to have clicked the “retry” button as suggested to successfully load the post later, but here is it, still live for everyone to see:

From our rally last year. A majority of Pennsylvanians from *both* sides of the aisle support legalization of cannabis. It's time to stop prosecuting people for something most of us don't even think should be illegal. pic.twitter.com/QHFqdGlY35

Coulter starts her post by acknowledging that “Lt. Gov. John Fetterman likes weed. A lot.” She gives a brief account of how the official captured headlines for hanging the cannabis flag on the balcony of his state Capitol office as he pushed for legalization in the Keystone State.

Even after state officials removed both the rainbow and cannabis flags, allegedly at the behest of certain GOP lawmakers, he made a point of restoring them. They survived an attempt by the conservative legislature to ban the marijuana-themed decor as part of a 2020 budget bill, too.

I even had to rehang this one. 🙄 pic.twitter.com/NPuADtb1Lt

But according to Coulter, “now that he’s running for the U.S. senate as an everyman, working class man of the people, as opposed to the Bernie Sanders left-wing loon that he is,” Fetterman wants to hide the January tweet of him holding the flag.

Marijuana Moment reached out to Coulter with the live link to the post she suggested was deleted, but she did not respond.

The pundit’s analysis about the deleted (but not actually deleted) tweet is questionable on its own. If a candidate wanted to position themselves as an “everyman,” one would assume they’d want to be aligned with the majority of the public. And a poll of Pennsylvania voters that was released last year shows that 58 percent of voters in the state support legalization.

While Oz himself has previously called marijuana “one of the most underused tools in America” and said that the country should “completely change our policy on marijuana,” he and the Republican National Committee have recently derided the lieutenant governor for vocally backing cannabis reform.

Oz also made dismissive comments about the official’s “pot flag” during an appearance on Fox News.

Oz: He’s known for hanging a pot flag outside the window… I knew from the gay one, you work hard… pic.twitter.com/bk2Lz2DyIw

The fact of the matter is, Fetterman hasn’t shied away from his drug policy reform platform during his campaign. If anything, he’s leaned into it.

For example, he’s commented on his jealousy that New Jersey cannabis sales launched while Pennsylvania has yet to enact legalization and he’s persisted in making people aware of an expedited pardon process he’s championed for people with “bullshit” marijuana convictions.

The official, who serves as chair of the state Board of Pardons, has said that one of his key goals in his final year in office is to ensure that as many eligible people as possible submit applications to have the courts remove their cannabis records and restore opportunities to things like housing, student financial aid and employment through an expedited petition program.

When the Pennsylvania BOP convenes next week, we’ll approve many more.

Serving up a 2nd Chance in PA- for FREE.

“This is a plant that’s legal in many jurisdictions across America, and it’s not a big deal, but you go through your life in many cases a convicted felon, and that excludes you from a lot of opportunities,” he said prior to announcing his Senate run. “So I developed an expedited review process that I encourage everybody to partake in.”

After Pennsylvania Gov. Tom Wolf (D) endorsed marijuana legalization, Fetterman also led a statewide listening tour to hear what residents had to say about the policy proposal. He touted his role in that tour on his Senate campaign website.

If Fetterman was trying to steer clear of being associated with cannabis reform as a Senate candidate, he’d have his work cut out for him. But the reality is that, no, an eight-month-old post of the official with the cannabis flag is not “The Tweet John Fetterman Doesn’t Want You to See.”