New poll results out of Pennsylvania show that nearly 6 in 10 (58 percent) adult residents support the “complete legalization” of marijuana in the commonwealth, the highest level of support for legalization since the Muhlenberg College’s annual public health poll began tracking the issue.

“The trend on public support for legalization of marijuana in Pennsylvania is clear, with support growing for the eighth year in a row,” Chris Borick, director of the college’s Institute of Public Opinion, said in a statement accompanying the survey results. “As the state government considers this policy option, the public is increasingly coming to the conclusion that they support legalization.”

Just over a quarter of respondents (26 percent) said they were opposed to legalizing cannabis in Pennsylvania. Another 14 percent neither favored nor opposed legalization, while three percent said they weren’t sure. 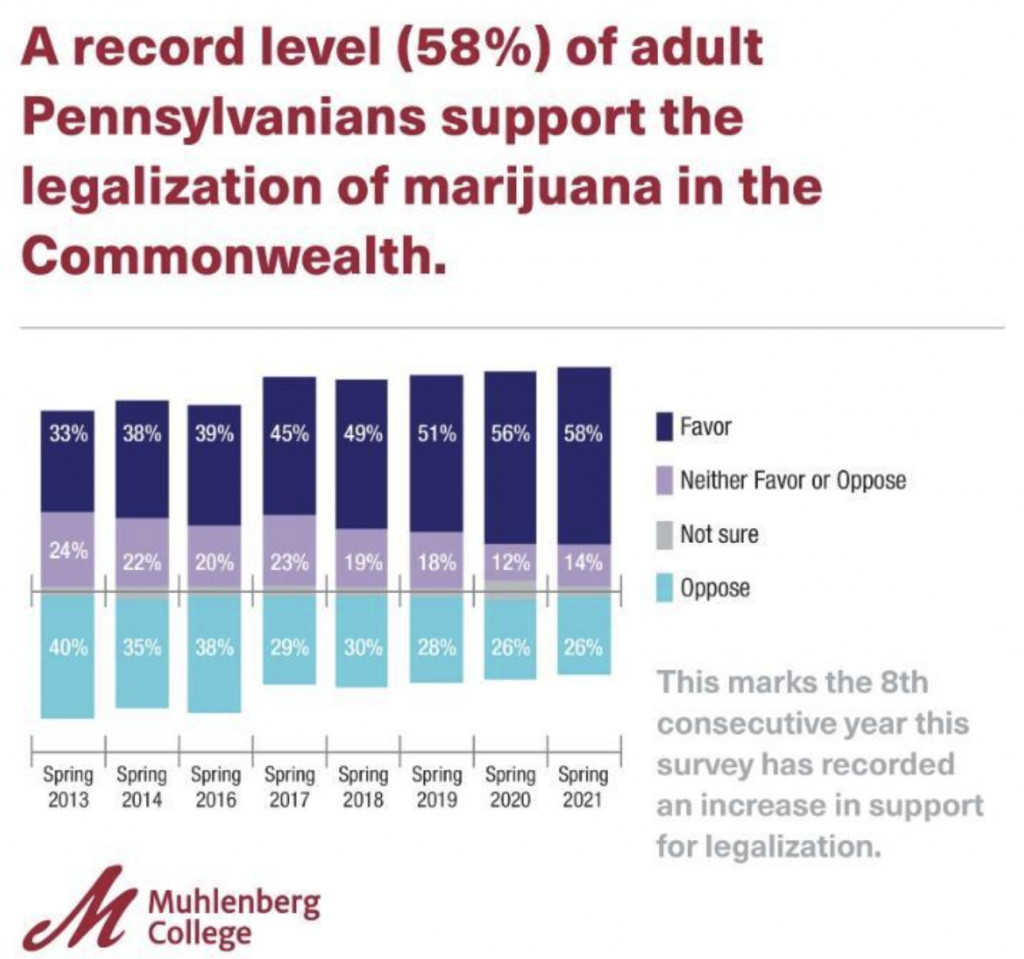 The poll, published last week, surveyed 421 Pennsylvania adults during the latter half of March. Its finding have a margin of error of +/- 5.5 percent.Nationally, public support for legalization is also pushing an all-time high. A Quinnipiac poll released this month found that 69 percent of all Americans now favor ending prohibition, an all-time high since Quinnipiac University began tracking the issue in 2012. Three other polls, released this month by Pew Research Center, CBS News and Ipsos, show strong majorities in favor of legalization.

The Muhlenberg survey also asked about a range of other unrelated issues, including COVID-19 vaccines, government responses to the pandemic and attitudes on universal healthcare. Its only other drug-related questions focused on opioids, asking how serious of a problem “heroin abuse in America is” and whether respondents knew anyone “who has been addicted to heroin or another opiate.”

An overwhelming 81 percent of Pennsylvanians said opioid use disorders are “very serious,” with 16 percent saying the issue is “somewhat serious.” Only one percent of respondents said it was “not at all serious,” while two percent were unsure.

Fifty-nine percent, meanwhile, said they knew someone with opioid use disorder.

In Pennsylvania, a bipartisan Senate duo is currently crafting legislation that would legalize cannabis across the commonwealth. Sens. Dan Laughlin (R) and Sharif Street (D) announced some details of the proposal earlier this year, though the bill has yet to be formally introduced.

“I ran for public office because I wanted to solve problems—and you can only solve problems when you are honest about what people think and how people really feel,” Laughlin said at a press conference in February. “It’s clear to me that public attitudes towards marijuana have changed dramatically in the past decade, maybe more than any other issue in recent memory.”

On the House side, meanwhile, a handful of Democrats earlier this month introduced a separate bill, HB 1180, which would legalize the purchase and possession of marijuana by adults 21 and older. Adults would be allowed to grow up to six plants in a private residence for personal use and would also be able to gift other adults up to an ounce of cannabis.

Outside the legislature, Gov. Tom Wolf (D) said earlier this year that marijuana legalization was a priority as he negotiated the annual budget with lawmakers, however, his formal spending request doesn’t contain legislative language to actually accomplish the cannabis policy change.

The governor has repeatedly called for legalization and pressured the Republican-controlled legislature to pursue the reform since coming out in favor of the policy in 2019. Shortly after he did that, a lawmaker filed a bill to legalize marijuana through a state-run model.

Lt. Gov. John Fetterman (D), meanwhile, has been vocal in his support of legalization.

Fetterman, who is running for U.S. Senate, previously led a listening tour across the state to solicit public input on legalization. He’s credited that effort with helping to move the governor toward embracing comprehensive reform. The lieutenant governor even festooned his Capitol office with marijuana-themed decor.

Late last year, the lieutenant governor hosted a virtual forum where he got advice on how to effectively implement a cannabis system from his counterparts in Illinois and Michigan, which have enacted legalization.

The COVID-19 pandemic, and its financial fallout, have also given lawmakers a reason to consider legalization, which make tens of millions of dollars in tax revenue. A majority of Senate Democrats in July sent the governor a letter arguing that legislators should pursue the policy change in order to make up for revenue loss resulting pandemic, but it’s not clear whether legalization could pass the state’s GOP-controlled Senate.