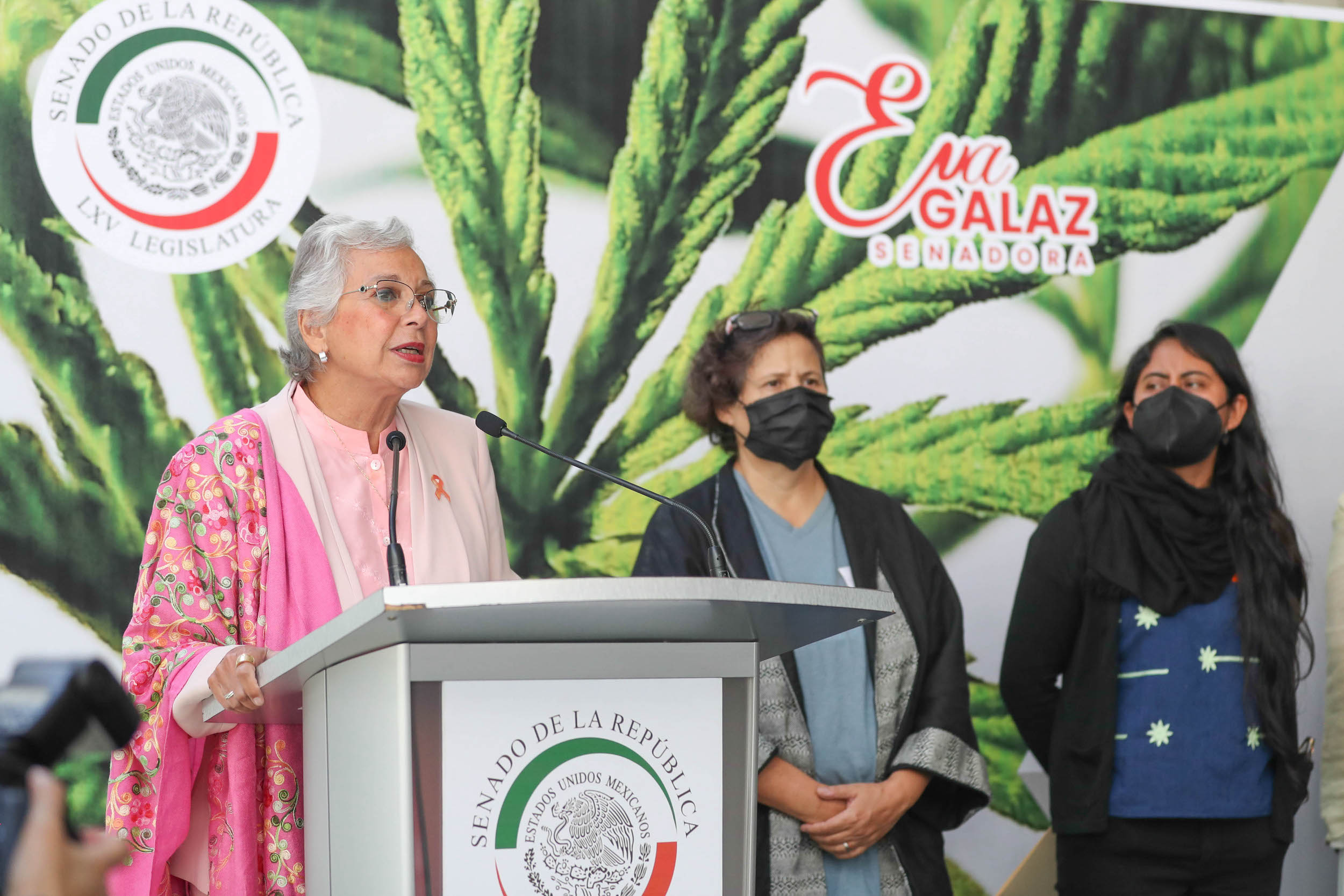 The president of Mexico’s Senate says lawmakers could advance legislation to regulate marijuana in the coming weeks—the latest in a long string of comments from leadership on plans to finally implement rules to legally regulate cannabis production and sales.

Nearly three years ago, the Mexican Supreme Court declared that the country’s prohibition on the personal possession and cultivation of cannabis was unconstitutional. Lawmakers were then obligated to enact the policy change but have since been unable to reach a consensus on legislation to put in place regulations for a marijuana program.

At the request of legislators, the court agreed to extend its deadline for Congress to formally end prohibition on multiple occasions. But because of the repeated failed attempts to meet those deadlines, justices ultimately voted to end criminalization on their own in June.

“In these times, there is no longer room for the prohibitionist policy,” Senate President Olga Sánchez Cordero, who previously served at a cabinet-level position in President Andrés Manuel López Obrador’s administration, said at an event marking the opening of a new Senate-hosted exhibit on cannabis on Tuesday.

“We are the Mexico of freedoms, and the people are aware of it,” she said, according to a translation. Lawmakers will take up implementation legislation “in the coming weeks or months—but I do not want more time to pass,” she said.

“The policy that we want to build in the Senate of the Republic is aimed at eliminating prohibitionism and guaranteeing the safety and control of consumption based on proper regulation,” the senator said.

Sen. Martha Lucía Micher Camarena, a leader in the ruling MORENA party, said that their “commitment is with Mexicans—it is with native communities, it is with people’s health, with recreation.”

Senate Majority Leader Ricardo Monreal Avila also said recently that the stage is set for lawmakers to actually pass a marijuana legalization bill during the new session after multiple attempts in recent years fell short of getting over the finish line.

“With the beginning of the LXV Legislature, a new possibility was opened to discuss and approve this long-delayed law, which would put an end to 100 years of prohibitionist policy and criminalization of the consumption of the cannabis flower, opening, in turn, a multimillion dollar market nationally and internationally, which could be beneficial for the economic reactivation of our country,” he said earlier this month.

After the Supreme Court independently invalidated prohibition earlier this year, advocates stressed that the decision underscores the need for legislators to expeditiously pass a measure to implement a comprehensive system of legal and regulated sales. They want to ensure that a market is established that’s equitable, addresses the harms of criminalization on certain communities and promotes personal freedom.

Lawmakers came close to achieving that goal over the past three years—but failed to get the job done.

The Senate approved a legalization bill late last year, and then the Chamber of Deputies made revisions and passed it in March, sending it back to the originating chamber. A couple of Senate committees then took up and cleared the amended measure, but leaders quickly started signaling that certain revisions made the proposal unworkable.

Monreal said further revisions may be necessary to get a final bill ready for enactment.

“If this law is approved in this ordinary period of session, some modifications should also be made to the tax collection legal framework, to provide for a special tax on cannabis and its derivatives, as is the case of other products with an impact on public health: spirits, beer, gasoline and tobacco,” he said, estimating that it could result in the equivalent of nearly a billion U.S. dollars in revenue.

After the Chamber of Deputies previously approved the Senate-passed legalization bill, senators said that the revised proposal was critically internally conflicted—on provisions concerning legal possession limits, the definition of hemp and other issues—and lawmakers themselves could be subject to criminal liability if it went into effect as drafted.

But Monreal said in April that if the court were to make a declaration of unconstitutionality before a measure to regulate cannabis was approved, it would result in “chaos.”

The top senator also talked about the importance of lawmakers taking their time to craft good policy and not rush amidst lobbying from tobacco and pharmaceutical industry interests.

“We must not allow ourselves to be pressured by interests,” he said at the time. “The Senate must act with great prudence in this matter.”

Sen. Eduardo Ramírez Aguilar of the MORENA party said in April that “at this time, it is important to legislate in the terms that are presented to us” and then consider additional revisions to cannabis laws through subsequent bills.

That’s the position many legalization advocates took as well, urging lawmakers to pass an imperfect bill immediately and then work on fixing it later.

Under the proposal, adults 18 and older would be allowed to purchase and possess up to 28 grams of marijuana and cultivate up to six plants for personal use. The deputies made changes that principally concern the regulatory structure, rules for the commercial market and licensing policies.

One of the most notable changes made by the Chamber of Deputies was that the revised bill would not establish a new independent regulatory body to oversee the licensing and implementation of the program as was approved by the Senate. Instead, it would give that authority to an existing agency, the National Commission Against Addictions.

Deputies also approved additional revisions to increase penalties for unauthorized possession of large amounts of cannabis, prevent forest land from being converted to marijuana growing areas and to require regulators to “coordinate campaigns against problematic cannabis use and…develop permanent actions to deter and prevent its use by minors and vulnerable groups.”

Advocates had hoped for more. Throughout this legislative process, they’ve called for changes to further promote social equity and eliminate strict penalties for violating the law.

While the bill would give priority for licenses to marginalized communities, advocates are worried that there might not be strict and specific enough criteria to actually ensure that ends up being the case. They also pushed for an amendment to make it so a specific percentage of licenses would be set aside for those communities, but that did not happen.

Monreal, for his part, said ahead of the Chamber of Deputies vote that there “is no problem if they modify the cannabis law, we have no problem.”

“That is their job and their function. And on the return we will review whether or not they are appropriate,” he said, according to a translation. “The idea is to regulate the use of cannabis and not ignore a prohibitionist approach that generated a great social problem in the country.”

President Andres Manuel Lopez Obrador said in December that a vote on legalization legislation was delayed due to minor “mistakes” in the proposal.

The legalization bill cleared a joint group of Senate committees prior to the full floor vote in that chamber last year, with some amendments being made after members informally considered and debated the proposal during a virtual hearing.

Members of the Senate’s Justice, Health, and Legislative Studies Committees had approved a prior version of legal cannabis legislation last year as well, but the pandemic delayed consideration of the issue. Sen. Julio Ramón Menchaca Salazar of the MORENA party said in April that legalizing cannabis could fill treasury coffers at a time when the economy is recovering from the health crisis.

As lawmakers work to advance the reform legislation, there’s been a more lighthearted push to focus attention on the issue by certain members and activists. That push has mostly involved planting and gifting marijuana.

Late last year, Sánchez Cordero, then a top administration official, was gifted a cannabis plant by senator on the Senate floor, and she said she’d be making it a part of her personal garden.

A different lawmaker gave Sánchez Cordero, a marijuana joint on the floor of the Chamber of Deputies in 2019.

Cannabis made another appearance in the legislature last year, when Sen. Jesusa Rodríguez of the MORENA party decorated her desk with a marijuana plant.

Drug policy reform advocates have also been cultivating hundreds of marijuana plants in front of the Senate, putting pressure on legislators to make good on their pledge to advance legalization.