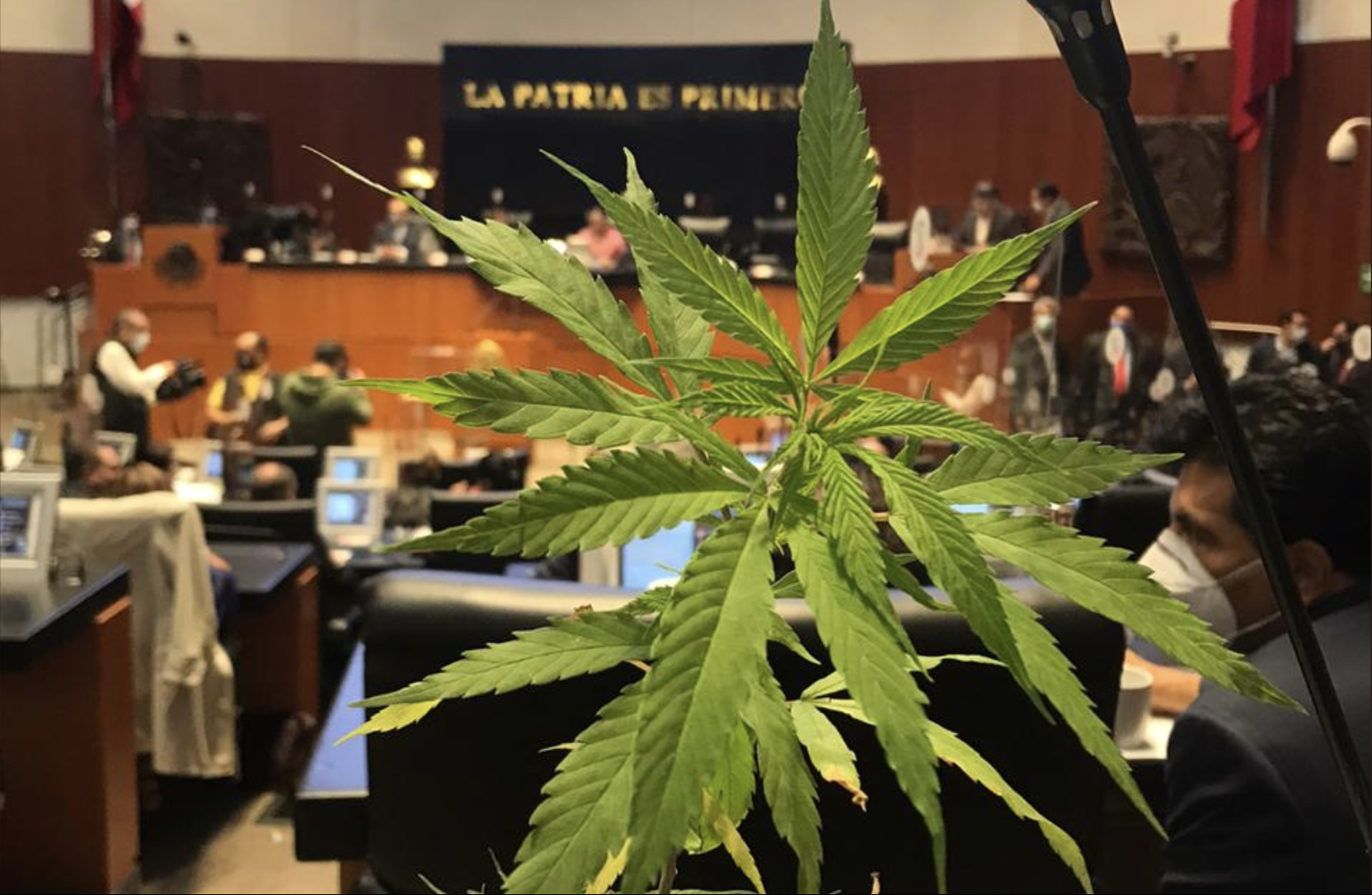 A Mexican senator added a unique decoration to her desk on Monday: a marijuana plant.

To express her support for legislation to legalize cannabis just ahead of the start of a new session on Tuesday, Sen. Jesusa Rodríguez of the ruling Morena party, displayed the plant on her desk before the chamber voted to elect members of a regulatory board.

“Priority issue in the Senate for this period,” Rodríguez said in a tweet, referring to cannabis reform.

Sen. Ricardo Monreal, the Morena coordinator in the body, agreed.

“What I do want to tell you is that she says that the legislation on cannabis is a priority and I say to her that yes, it is one of the group’s priorities,” he said.

A lawmaker gave a key member of the president’s cabinet a joint while speaking on the floor of the Chamber of Deputies last year.

A legalization bill was approved by several committees earlier this year, but the reform effort has been stalled due to the coronavirus pandemic. The Supreme Court—which deemed the country’s prohibition on personal possession and cultivation unconstitutional in 2018—is currently giving lawmakers until December 15 to enact the policy change.

Rodríguez has made clear in other unconventional ways that she’s in favor of cannabis reform. For example, the senator promoted a marijuana-themed comic book last year. And she made a tongue-in-cheek comment comparing the evolution of society’s understanding of cannabis to how people learned about the functions of the clitoris.

The legalization bill that’s set to advance this coming session was revised during a joint meeting of the Justice, Health, Legislative Studies and Public Safety Committees in March.

The proposal would allow adults 18 and older to possess and cultivate marijuana for personal use. Individuals could grow up to 20 registered plants as long as the total yield doesn’t exceed 480 grams per year. Medical patients could apply to cultivate more than 20 plants, however.

Personal possession would be capped at 28 grams, but possession of up to 200 grams would be decriminalized.

The Mexican Institute of Regulation and Control of Cannabis, a decentralized body established under the measure, would be established and responsible for regulating the market and issuing licenses for marijuana businesses.

The bill proposes a 12 percent tax on cannabis sales, with some revenue going toward a substance misuse treatment fund.

Public consumption would be permissible, except in spaces designated as 100 percent smoke-free. Hemp and CBD would be exempt from regulations that apply to THC products.

An earlier version of the legislation was approved by Senate committees last year ahead of the court’s previous October deadline.

Sen. Julio Ramón Menchaca Salazar, also of the Morena party, said in April that while legislators must still resolve certain disagreements about the legislation, legalizing cannabis could fill treasury coffers at a time when the economy is recovering from the pandemic.

While advocates are eager to enact reform, they’ve also raised several concerns with the legislation as drafted, particularly as it relates to restorative justice.

They would like to enhance social equity provisions, provide protections for cannabis consumers and ensure the market empowers domestic farmers, especially those most impacted by the drug war.