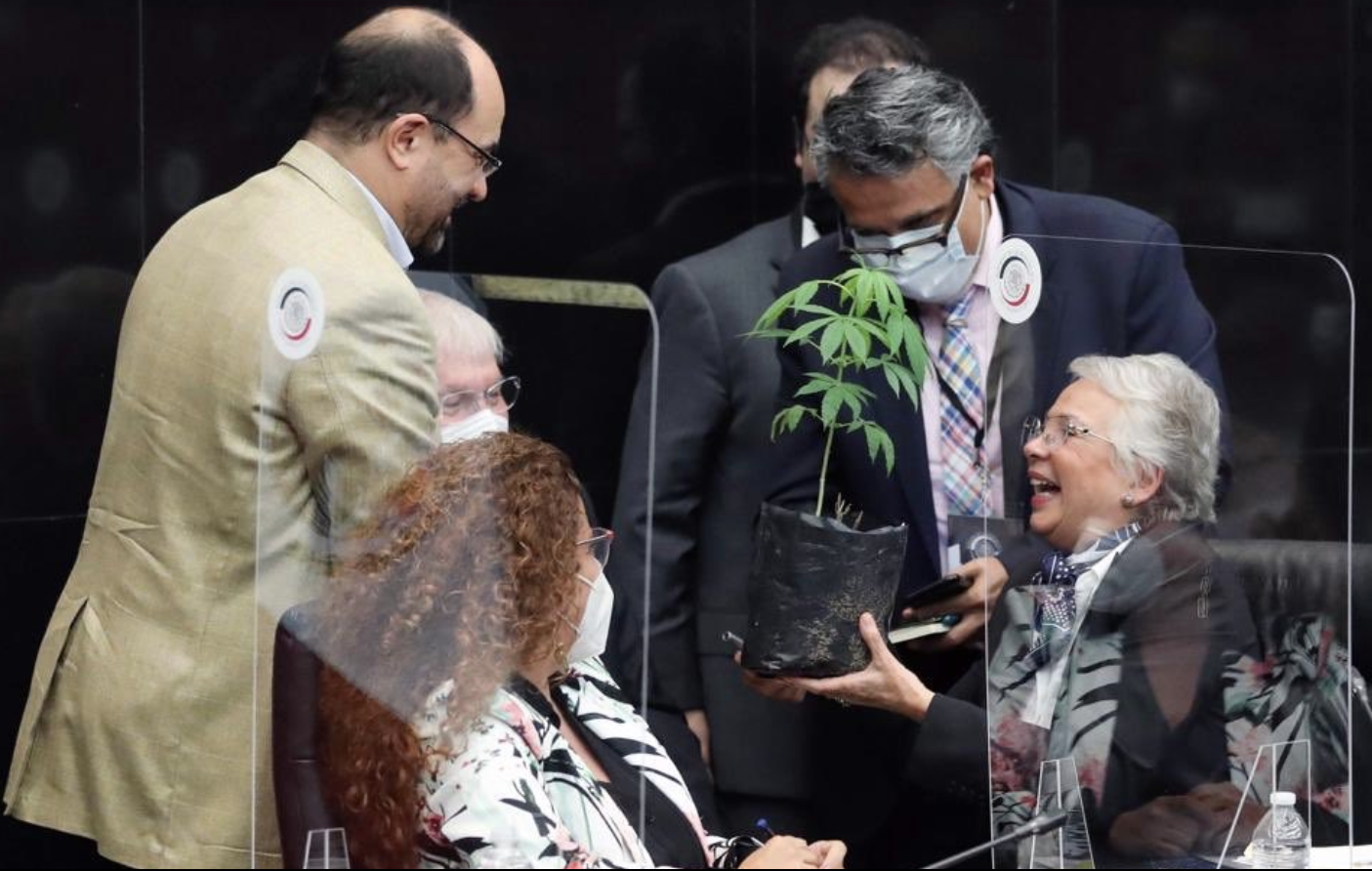 Marijuana is becoming something of a staple in the Mexican Congress, and not just when it comes to reform bills being considered. Actual cannabis products are regularly being exchanged, displayed and planted in and around legislative chambers as lawmakers work to legalize the plant.

On Wednesday, a top administration official was gifted a marijuana plant by senator, and she said she’d be making it a part of her personal garden.

Interior Ministry Secretary Olga Sánchez Cordero said that by the time she plants the cannabis gift from Sen. Emilio Álvarez Icaza, she’ll be “fervently hoping that the law [to legalize cannabis] is already passed,” referring to reform legislation that the legislature has been working on the past couple years.

“The medicinal use of marijuana has been a revelation for the world, and second because hemp is industrially interesting from clothes, energy, paper, construction materials, stronger than any other construction material,” she said, according to a translation. “In other words, there is enormous potential with hemp and also the recreational use of marijuana, respecting the principle of the autonomy of the will and the free development of the person.”

Last year, a different lawmaker gave the Sánchez Cordero a marijuana joint on the floor of the Chamber of Deputies.

“I bring you a gift as a reminder of that proposal you made at the beginning, because that goes to be the way to help us build peace. Let’s regulate the use of drugs,” Deputy Ana Lucía Riojas Martínez said at the time.

Cannabis made another appearance in the legislature last month, when Sen. Jesusa Rodríguez of the ruling Morena party decorated her desk with a marijuana plant.

Drug policy reform advocates have also been cultivating hundreds of marijuana plants in front of the Senate, putting pressure on legislators to make good on their pledge to advance legalization.

A legalization bill was approved by several committees earlier this year, but the reform effort has been stalled due to the coronavirus pandemic. The nation’s Supreme Court—which deemed the country’s prohibition on personal possession and cultivation unconstitutional in 2018—is currently giving lawmakers until December 15 to enact the policy change.

The legalization bill that’s set to advance this coming session was revised during a joint meeting of the Justice, Health, Legislative Studies and Public Safety Committees in March.

The proposal would allow adults 18 and older to possess and cultivate marijuana for personal use. Individuals could grow up to 20 registered plants as long as the total yield doesn’t exceed 480 grams per year. Medical patients could apply to cultivate more than 20 plants, however.

Personal possession would be capped at 28 grams, but possession of up to 200 grams would be decriminalized.

The Mexican Institute of Regulation and Control of Cannabis, a decentralized body established under the measure, would be established and responsible for regulating the market and issuing licenses for marijuana businesses.

The bill proposes a 12 percent tax on cannabis sales, with some revenue going toward a substance misuse treatment fund.

Public consumption would be permissible, except in spaces designated as 100 percent smoke-free. Hemp and CBD would be exempt from regulations that apply to THC products.

An earlier version of the legislation was approved by Senate committees last year ahead of the court’s previous October deadline.

Sen. Julio Ramón Menchaca Salazar, also of the Morena party, said in April that while legislators must still resolve certain disagreements about the legislation, legalizing cannabis could fill treasury coffers at a time when the economy is recovering from the pandemic.

While advocates are eager to enact reform, they’ve also raised several concerns with the legislation as drafted, particularly as it relates to restorative justice.

Zara Snapp, a legalization activist with the Instituto RIA and the coalition #RegulacionPorLaPaz, told Marijuana Moment on Friday that while it’s “concerning” that committees haven’t yet scheduled time to take the legalization bill back up, she’s had conversations with senators from all political parties and “they all tell me this will happen this legislative session.”

“We’re going to take them at their word that they will be approving this in the next two to three months,” she said.