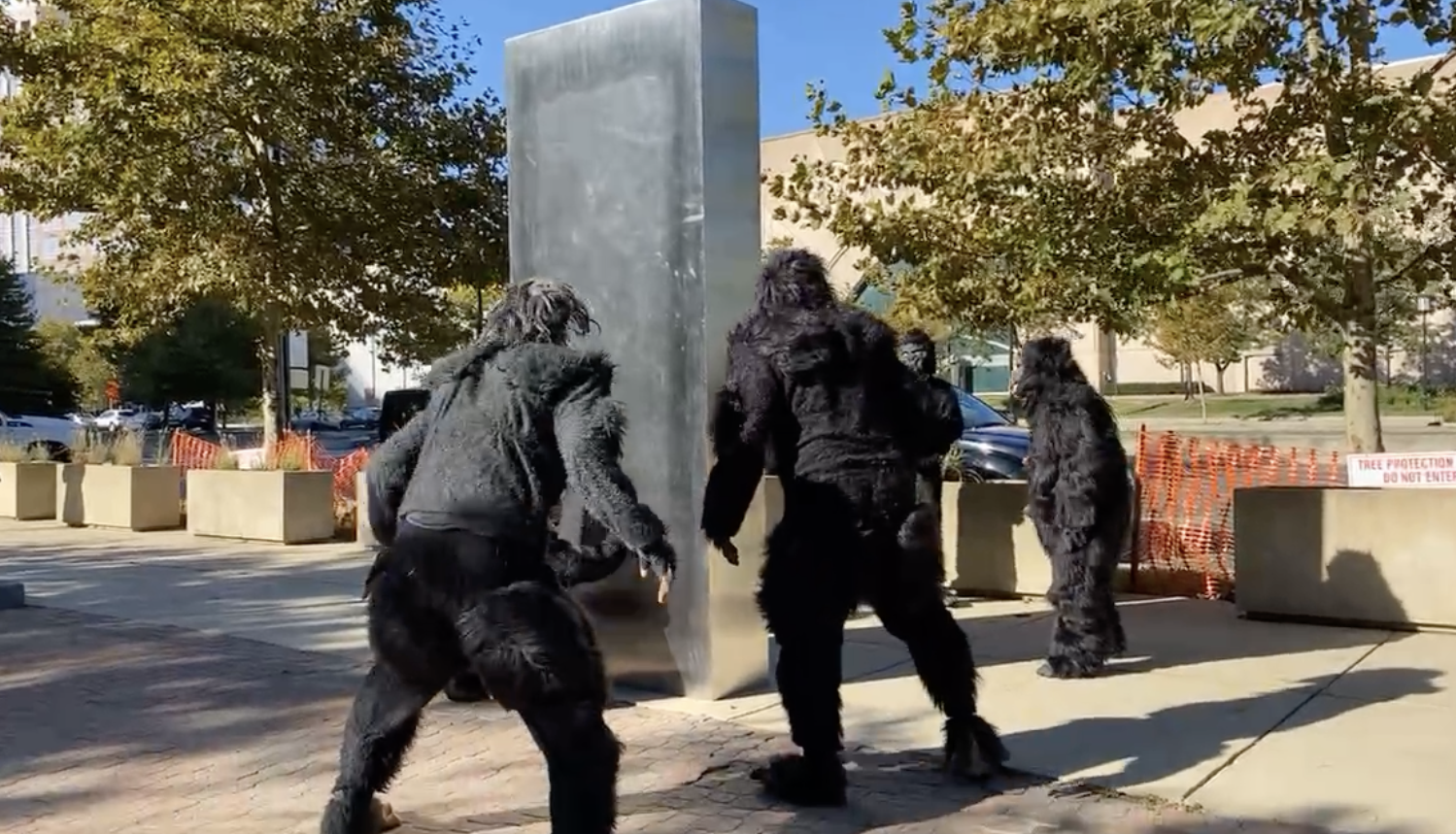 A group of activists dressed in ape suits danced around an eight-foot monolith that they erected outside of the Drug Enforcement Administration (DEA) headquarters on Wednesday, calling on the agency to evolve its policies on marijuana and other controlled substances.

It’s OK if you need to read that again.

A group calling itself Anonymous Apes organized the stunt to protest DEA policies such as the criminalization of drugs like cannabis and psilocybin and the way the agency enforces current bans, such as through the use of deadly no-knock raids. It was a play on Stanley Kubric’s 1968 sci-fi film 2001: A Space Odyssey, in which apes discover an alien monolith that accelerates human evolution.

The activists are effectively telling DEA to evolve on various criminal justice reform issues—and they did so by placing a 2,001-pound block in front of the agency’s main building in Arlington, Virginia and drawing a scene as they mimicked apes.

“The Drug Enforcement Administration of the Department of Justice has failed the American people for too long,” Anonymous Apes said in a statement that was promoted by the advocacy group DC Marijuana Justice (DCMJ). “This monolith of government oppression has imprisoned 10’s of millions of American citizens for seeking healing relief with natural substances.”

The Anonymous Apes at the #DEAmonolith issued a statement: pic.twitter.com/RddVp0eSWn

“The DEA, much like a floppy disc or VHS tape, must innovate to represent current science around plant medicines and end its lopsided enforcement practices which disproportionately affect people of color,” Anonymous Apes said. “We believe this monolith has arrived to guide us to a better future, and joins with us to demand that the DEA be brought to justice.”

“WE DEMAND THAT THE MONOLITH OF THE WAR ON DRUGS COMES DOWN, RECORDS ARE EXPUNGED AND CLEMENCY IS GIVEN NOW! APES TOGETHER STRONG!”

Anonymous Apes are outside the DEA HQ in Arlington, Virginia! They are demanding the end of this monolith of government oppression! #DEAmonolith pic.twitter.com/dgx45zcnsv

DCMJ said it also “condemns the contemporary policies of the DEA, which stymy research, development, and the full legalization of the cannabis plant.”

“Former presidents of the United States of America lawfully grew cannabis and it is anathema that American citizens are presently prevented from doing so without onerous licenses and red tape due to the DEA’s monolithic presence in drug policy,” it said. “DCMJ supports these demands and calls upon the Joseph Biden administration to right the wrongs put in place by the DEA while he was a member of Congress.”

The amount of money the #DEA gets to fight the failed #WarOnDrugs is absolutely bananas! #DEAmonolith pic.twitter.com/3LRqfUoNmQ

Other advocates and lawmakers have also implored the Justice Department to reform its drug policies—but in more conventional ways.

For example, Sens. Elizabeth Warren (D-MA) and Cory Booker (D-NJ) recently sent a letter to Attorney General Merrick Garland, requesting that he initiate a process to federally deschedule cannabis. They asked for a response by Wednesday, but it’s currently unclear if the department has gotten back to the senators.

DEA has taken some steps to further promote research into controlled substances, including by proposing a massive increase in the production of drugs like cannabis, psilocybin and MDMA for research in 2022.

Advocates and experts remain frustrated that these substances remain in the strictest federal drug category in the first place, especially considering the existing research that shows their medical value for certain conditions.

A federal appeals court in August dismissed a petition to require the DEA to reevaluate cannabis’s scheduling under the Controlled Substances Act. However, one judge did say in a concurring opinion that the agency may soon be forced to consider a policy change anyway based on a misinterpretation of the therapeutic value of marijuana.