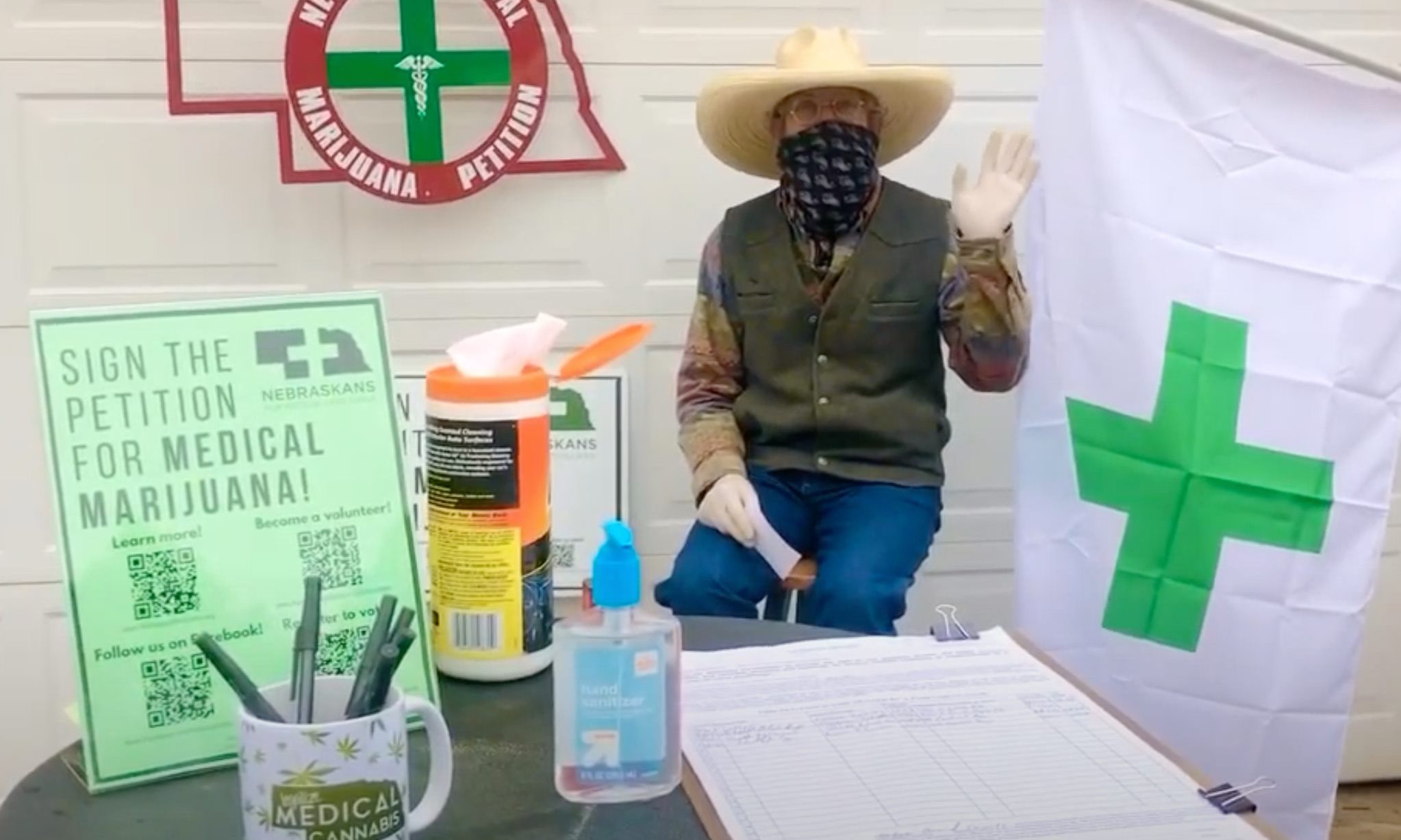 Campaigns to legalize recreational marijuana in Montana and medical cannabis in Nebraska are back in action after temporary suspensions due to the coronavirus pandemic.

Videos and photos posted by Nebraskans for Medical Marijuana and New Approach Montana show canvassers collecting signatures for the proposed ballot initiatives this week, using new safety protocols to prevent the spread of the virus.

Masks, gloves, single use pens, sanitizer and disinfecting wipes will be required. And while signatures must be physically observed, the canvassers will be at a safe distance.

“Our signature drive is resuming! We only have a few weeks before the deadline to submit, so it’s time to get busy!” the Nebraska campaign said in a post on Thursday. “We have a huge task ahead of us, but we will succeed if enough of us pitch in! Patients and families across the state are counting on us. Let’s get out there and get it done while keeping ourselves and others safe!”

“Essentially, we have to build the race track before you can drive laps on it,” the group said. “We are steadily hiring signature gatherers and getting those folks out in the field and they are doing great so far. Just a few days in and we are doing well and the protocols we put in place to maintain social distancing are working well.”

“But with Covid, this whole thing looks much different logistically than it ever has before,” the post continues. “We are one of the only signature drives going on in the whole country, so we have to be extra careful. We are trying to keep everyone healthy as we go through this process, so it takes more due diligence than ever before.”

The campaign is also accepting applications for paid signature gatherers.

The Nebraska initiative would allow physicians to recommend cannabis to patients suffering from debilitating medical conditions. Patients would be allowed to possess, purchase and “discreetly” cultivate marijuana for personal use.

Activists must collect about 130,000 valid signatures from registered voters by July 8 in order to qualify for the November ballot.

Montana activists are pushing two measures: one statutory initiative to establish a regulated cannabis market for adult use as well as a constitutional amendment stipulating that only those 21 and older can participate in the market.

They need to collect about 25,000 valid signatures from registered voters for the statutory legalization measure and 51,000 needed for the constitutional proposal concerning age requirements. The petitions must be submitted by June 19.

Here’s a status update on other drug policy reform efforts throughout the country:

North Dakota activists said they plan to continue campaign activities for a marijuana legalization initiative, but it’s more likely that they will seek qualification for the 2022 ballot.

In Arizona, the organizers of a legalization effort unsuccessfully petitioned the state Supreme Court to instruct the secretary of state to allow people to sign cannabis petitions digitally using an existing electronic system that is currently reserved for individual candidates seeking public office—though they think they have enough signatures to qualify in any case.

A campaign to legalize cannabis in Missouri officially gave up its effort for 2020 last month due to signature collection being virtually impossible in the face of social distancing measures.

Idaho medical cannabis activists announced that they are suspending their ballot campaign, though they are still “focusing on distributing petitions through online download at IdahoCann.co and encouraging every volunteer who has downloaded a petition to get them turned in to their county clerk’s office by mail, regardless of how many signatures they have collected.”

In New York, Gov. Andrew Cuomo (D) conceded last month that the 2020 legalization push is “effectively over” in the legislature. Coronavirus shifted priorities, and comprehensive cannabis reform seems to have proved too complicated an issue in the short-term.

Organizers in Oregon are holding out hope that a measure to legalize psilocybin for therapeutic purposes will make the statewide November ballot. The campaign already collected enough raw signatures to qualify, though they’ve yet to be validated.

Also in Oregon, a separate proposed ballot measure would decriminalize possession of all illicit drugs and use existing marijuana tax revenue to fund expanded treatment services. The two Oregon campaigns also recently announced that they are partnering in their signature gathering efforts.

Activists in Washington State are also working on a drug decriminalization and treatment measure.

California activists had hoped to get a measure to legalize psilocybin on the state’s November ballot, but the campaign stalled out amid the coronavirus pandemic.

Prior to the COVID-19 outbreak and stay-at-home mandates, measures to legalize marijuana for medical and recreational purposes qualified for South Dakota’s November ballot.

And in Mississippi, activists gathered enough signatures to qualify a medical cannabis legalization initiative for the ballot—though lawmakers also approved a competing (and from advocates’ standpoint, less desirable) medical marijuana proposal that will appear alongside the campaign-backed initiative.