Oregon activists behind an initiative to legalize psilocybin mushrooms for therapeutic purposes announced on Monday that they have secured more than enough valid signatures to qualify for the November ballot.

While the secretary of state’s office hasn’t yet verified all of the signatures, the Yes On IP34 campaign said it has independently determined that they’ve gathered enough to make the cut ahead of a July 2 submission deadline.

At a virtual press conference, the campaign revealed it has collected a new total of 164,782 signatures, and will submit the additional petitions on Monday, giving them “great confidence that Oregon’s psilocybin therapy initiative will qualify for the statewide ballot.”

“Now, we’ll get the official word from the secretary of state sometime next month, but our submission of signatures today will put us comfortably above those requirements,” Tom Eckert, chief petitioner, said.

The campaign’s prior petition submissions were validated by the state at an 80.2% approval rate. Of the new 31,209 signatures filed, only 5,112 (or 16.4 percent) must be deemed valid for the measure to officially qualify for ballot access. 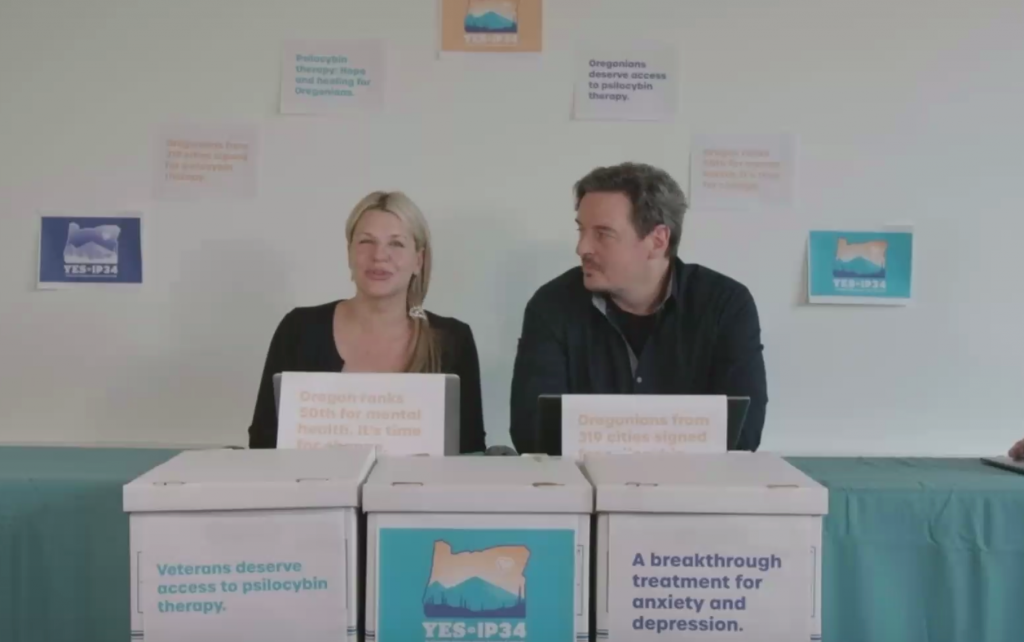 “This initiative is about giving Oregonians safe, legal, regulated access to psilocybin-assisted therapy in licensed settings, with trained and competent facilitators,” he said. “That’s what the science supports. That’s our approach in Oregon. And that’s why we believe Oregonians deserve access.”

If it ultimately qualifies and voters approve it, Oregon would become the first jurisdiction in the U.S. to implement a therapeutic legalization model for so-called magic mushrooms. There wouldn’t be any specific conditions that make people eligible for the therapy.

The Psilocybin Therapy Initiative team is preparing to turn in our final round of signatures to the Secretary of State. Those boxes are full of thousands of signed petitions from Oregonians across the state who believe that psilocybin therapy should be voted on this November! pic.twitter.com/rDWsik52HA

This development is one of the latest examples of the success of the psychedelics reform movement after Denver became the first place in the U.S. to deprioritize enforcement of laws against psilocybin last year.

That was followed by a unanimous Oakland City Council vote in favor of a measure to make a wide range of entheogenic substances among the city’s lowest law enforcement priorities. The Santa Cruz City Council followed suit, and activists in more than 100 cities are now exploring ways to enact the policy change.

Washington, D.C. advocates are also in the final stages of collecting signatures for a psychedelics decriminalization initiative after being temporarily set back by the coronavirus pandemic.

Here’s a status update on other drug policy reform campaigns across the country:

Also in Oregon, a campaign working to put a measure on the ballot that would decriminalize currently illicit drugs and make investments in substance misuse treatment submitted more than 147,000 signatures last month, and it’s continued the gathering process as the deadline approaches on Thursday.

Washington State activists had planned to pursue a similar measure through the ballot, but citing concerns about the COVID-19 outbreak, they announced last week that they will be targeting the legislature instead.

Idaho activists behind a medical marijuana legalization initiative could get a second wind after a federal judge said last week that the state must make accommodations for a separate ballot campaign due to signature gathering complications due to the coronavirus pandemic.

Montana activists recently turned in more than 130,000 signatures to qualify a pair of legalization initiatives for the November ballot.

Nebraska activists are approaching a deadline next month to submit signatures for a proposed medical cannabis initiative.

In Arizona, the organizers of a legalization effort asked the state Supreme Court to instruct the secretary of state to allow people to sign cannabis petitions digitally using an existing electronic system that is currently reserved for individual candidates seeking public office. That request was denied, but advocates are still optimistic about the chances of making the ballot.

Prior to the COVID-19 outbreak and stay-at-home mandates, measures to legalize marijuana for medical and recreational purposes qualified for South Dakota’s November ballot.

And in Mississippi, activists gathered enough signatures to qualify a medical cannabis legalization initiative for the ballot—though lawmakers also approved a competing (and from advocates’ standpoint, less desirable) medical marijuana proposal that will appear alongside the campaign-backed initiative.

A campaign to legalize cannabis in Missouri officially gave up its effort for 2020 due to signature collection being virtually impossible in the face of social distancing measures.

North Dakota activists said they plan to continue campaign activities for a marijuana legalization initiative, but it’s more likely that they will seek qualification for the 2022 ballot.