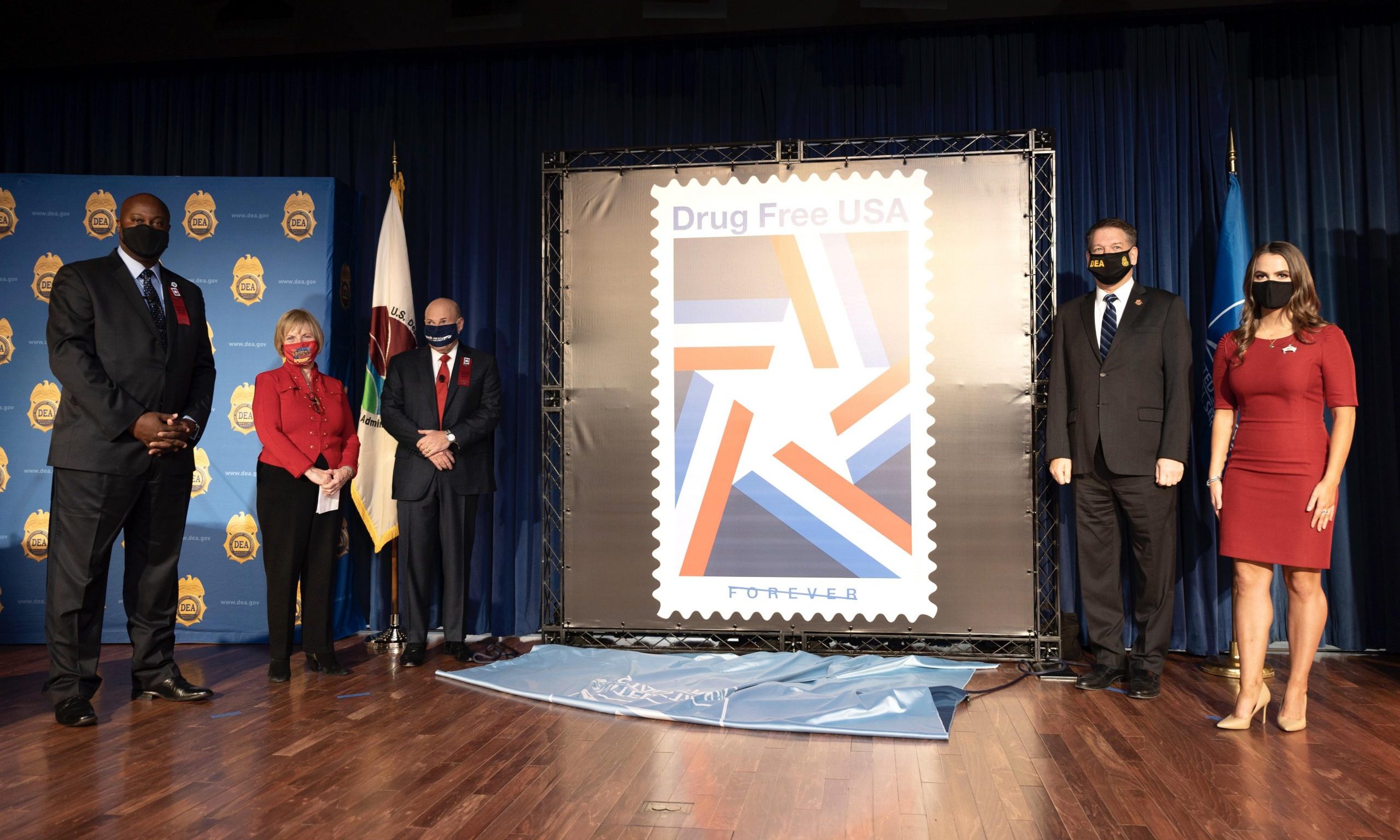 In partnership with Miss America 2020, the federal agencies unveiled the stamps—because, evidently, they feel the postage symbol could help move the U.S. toward a totally “drug-free” status that has never been achieved in the history of civilization.

Of course, the message is symbolic and targeted at preventing the use of currently illicit drugs.

“With this powerful image and message, the U.S. Postal Service has given us another means to promote the battle against drug abuse,” DEA Acting Administrator Timothy Shea said in a press release on Tuesday. “In America alone, 70,000 lives are lost to drug overdoses every year, with countless others impacted by the actions of violent drug traffickers and the scourge of illegal drug use.”

#DEA Acting Administrator Shea:“With this powerful image & message, @USPS has given us another means to promote the battle against drug abuse.We urge the public to use the Drug Free USA stamp to show their support for drug-free communities.” #DrugFreeStamp https://t.co/ApwCXJtCOb pic.twitter.com/YiPbq0MBcc

“We urge the public to engage in this fight against illegal drug use and to use the Drug Free USA stamp to signify their support for safer, drug-free communities,” he said.

“This is just another example of the DEA squandering government resources,” Maritza Perez, director of national affairs for the Drug Policy Alliance, told Marijuana Moment. “Rather than focus on ‘drug-free’ initiatives, our government should be focused on providing harm reduction services and treatment for people who use drugs.”

“We are facing an overdose epidemic made increasingly deadly due to the pandemic, but the DEA is selling stamps. Unconscionable,” she said. “Further, with an election just days away, people are depending on the USPS to ensure their ballots are delivered, not to waste precious time and resources memorializing a failed drug war that has caused nothing but pain to the same people that could be most disenfranchised during the electoral process.”

But Postmaster General Louis DeJoy said USPS hopes “that the Drug Free USA stamp will help publicize the dangers of illicit drug use and to promote drug abuse prevention.”

“Millions of Americans have had their lives hijacked by the impact of addiction. Families are destroyed and communities are disrupted. We can measure the cost to society in the billions, but we cannot measure the grief and the despair. To fully address this problem requires a unified effort at every level of the community, and with this stamp, the Postal Service is proud to join the Drug Enforcement Administration and many other federal, state and local partners’ commitment to a Drug Free USA.”

Camille Schrier, who holds the beauty pageant title of Miss America 2020, is also involved in the anti-drug postal promotion. She spoke about prescription opioid misuse promotion during a talk with the National Institute on Drug Abuse that was released last month.

In the DEA announcement, Schrier said, “I have dedicated my year as Miss America 2020 to keeping patients safe with medications and fighting prescription drug misuse, so I am thrilled to see this issue nationally recognized through the drug-free stamp.”

We are so excited! Thank you for having @CamilleSchrier join in on the fun! #DrugFreeStamp

“I admire the DEA’s commitment toward achieving a drug-free America, and am grateful to work beside them in educating the public on the dangers of drug misuse, living a substance-free life, as well as celebrating the creation of this historic stamp,” she said.

DEA initially revealed the stamp design in November 2019 at the conclusion of Red Ribbon Week, an annual occurrence first launched under the Reagan administration.

A description of the design states that the stamp “features a white star with lines of red, light blue and blue radiating from one side of each of the star’s five points, suggesting the unity necessary at all levels to effectively address drug abuse.”

For those with mailing needs who aren’t interested in supporting the notion of a “Drug Free USA,” USPS does have another stamp that recognizes the 50-year anniversary of the drug-fueled 1969 counterculture music festival Woodstock.

The stamp “features an image of a dove along with the words ‘3 DAYS OF PEACE AND MUSIC,’ evoking the original promotional poster for the festival,” USPS says.

Another option is a John Lennon Forever stamp, celebrating the iconic Beatles member and marijuana enthusiast who famously got “high with a little help” from his friends.

The stamps are intended to “celebrate one of history’s greatest rock-and-roll legends,” USPS said.

For those who do want to send their mail with DEA’s new anti-drug stamp, however, they will be available for the next year.

Meanwhile, DEA has been caught up in several court proceedings over its marijuana criminalization policy.

Following a series of legal challenges, the Supreme Court announced earlier this month that it will not hear a case challenging the constitutionality of federal cannabis prohibition.

The case was rejected in a series of rulings by lower courts, but attorneys for the plaintiffs said those decisions made it clear their only source of acceptable relief would come from the Supreme Court.

Lawyers representing a group of scientists and military veterans filed a comprehensive brief in federal court earlier this month, outlining their case challenging decisions about the classification of marijuana made by the agency. A week later, a major military veterans group urged the court to take up that case.

The plaintiffs initially filed that lawsuit against the federal agency in May, contending that DEA’s justification for maintaining a Schedule I status for cannabis is unconstitutional. DEA attempted to quash the case by filing a motion to dismiss, but the U.S. Court of Appeals for the Ninth Circuit rejected that request in August.

The plaintiffs also sued the agency last year in a separate case, alleging that it had deliberately delayed approving additional marijuana manufacturers for research purposes despite pledging to expand the number of those facilities in 2016.

A court mandated that DEA take steps to make good on its promise, and that suit was dropped after DEA provided a status update.

In March, DEA finally unveiled a revised rule change proposal that it said was necessary due to the high volume of applicants and to address potential complications related to international treaties to which the U.S. is a party.

The same scientists behind the original case filed another suit against DEA, claiming that the agency used a “secret” document to justify its delay of approving manufacturer applications.

That was born out when the Justice Department Office of Legal Counsel document was released in April as part of a settlement in the case, revealing, among other things, that the agency feels that its current licensing structure for cannabis cultivation has been in violation of international treaties for decades.

Separately, a federal court recently ruled that California regulators must comply with a DEA subpoena demanding information about marijuana businesses that they are investigating.