Montana voters appear poised to approve a proposal to legalize marijuana next week, according to a new poll released on Wednesday.

There is a stark partisan divide on the measure, with 77 percent of Democrats in favor, and only 31 percent of Republicans agreeing. Sixty-three percent of independents back the reform.

Ending marijuana prohibition has majority support among both men and women in the state, and from voter groups under the age of 65. Those older than that are narrowly divided on legalizing cannabis. 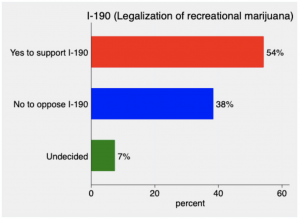 The poll involved interviews with 546 likely voters, conducted from October 19 to 24, and has a margin of error of 4.2 percent.

A separate survey released earlier this month showed the measure leading, but without outright majority support. That poll, conducted by a separate team at MSU, found that Montana voters support marijuana legalization, 49 percent to 39 percent.

The new numbers showing continued voter backing for marijuana legalization comes a week after the state Supreme Court rejected a request to block the initiative. The case was filed by opponents who argued that the measure violates the state Constitution by appropriating funds to specific programs.

Under the proposal, half of the public revenue generated from marijuana sales would go toward environmental conservation programs—a provision that earned the campaign key endorsements last month.

In addition to the cannabis revenue earmarked for land, water and wildlife conservation programs, the proposal aims to send funds toward veteran services, substance misuse treatment, health care and local governments, with the rest being pegged to the general fund.

The state Supreme Court didn’t rule on the merits of the challenge but said that opponents needed to take up the issue in lower courts first, which they said they plan to do.

Also this month, a Montana-based federal prosecutor appointed by President Trump sent a press release highlighting his concerns that legalizing cannabis in the state could cause public health and safety harms.

Montana voters will actually see two cannabis questions on their ballots. A statutory measure to legalize marijuana for adult use would allow adults to possess up to an ounce of cannabis and cultivate up to four plants and four seedlings at home, while a separate constitutional amendment stipulates that only those 21 and older could access the market.