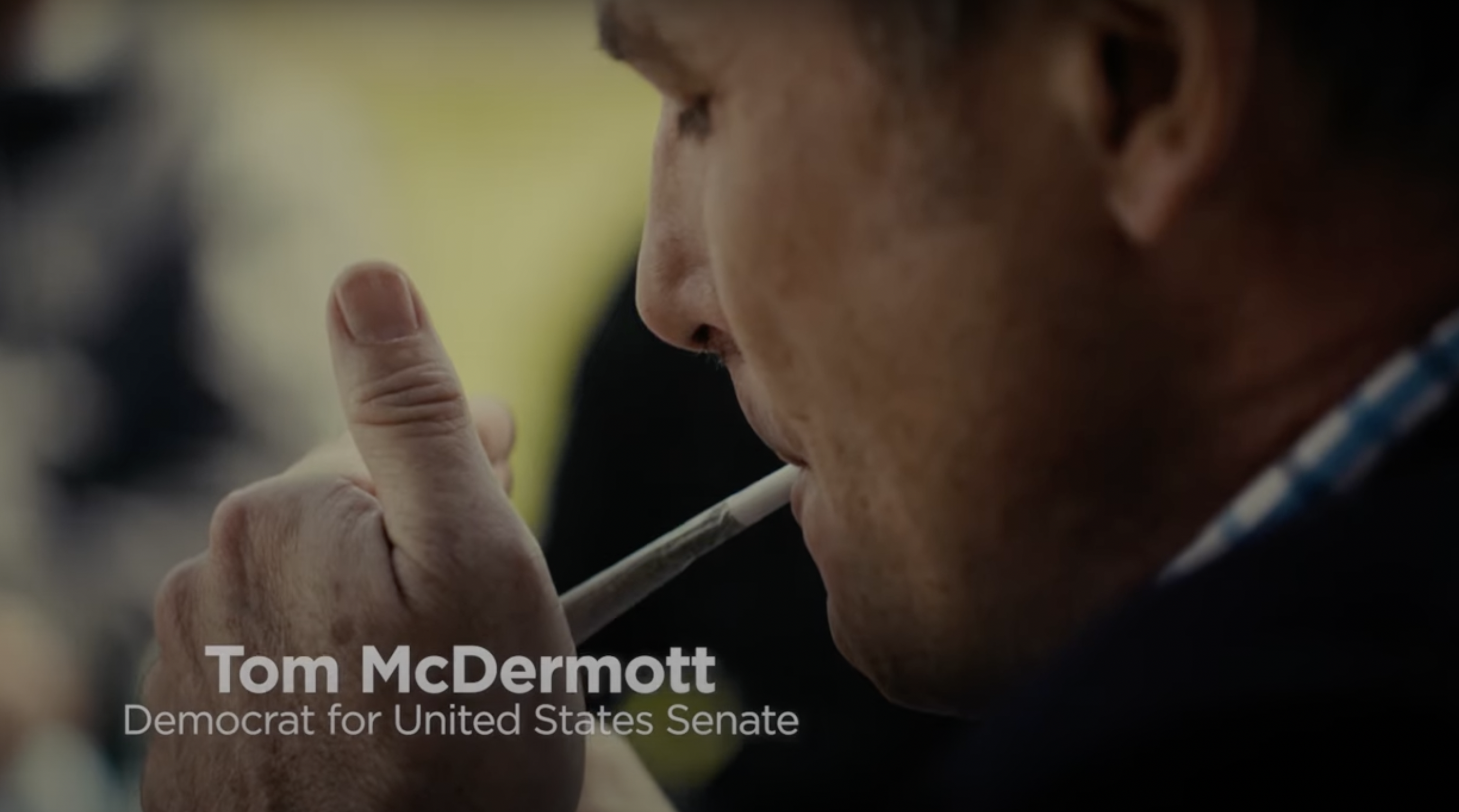 An Indiana mayor who’s running for U.S. Senate openly smoked marijuana in a campaign ad that was released on the unofficial cannabis holiday 4/20 on Wednesday. It’s the second time in this election cycle that a Democratic Senate candidate has toked on camera on the campaign trail.

Hammond Mayor Thomas McDermott (D) sparked up a joint in Illinois, just one mile from the Indiana border, to show how the patchwork of state policies on marijuana means that states like Indiana that keep cannabis illegal are missing economic opportunities while perpetuating a cycle of criminalization.

The ad is the latest in a recent trend of congressional office-seekers breaking with the status quo and showing that they don’t just support legalization, they partake, too. Democrat Gary Chambers, who is also seeking a seat in the U.S. Senate, drew headlines this year when he smoked a blunt in one of his first campaign ads.

After inhaling, McDermott starts by saying that the “legalization of cannabis is important to this campaign.” Not only will he continue advocating for reform in Indiana; he said that if elected to represent the state in Congress, he will strive to enact the policy change federally, too.

He was joined in the campaign ad by attorneys, a city councilman, a distiller and a physician who also expressed support for legalization. The doctor was a designated driver to get the Senate candidate back home safely after filming on the spot wrapped.

Even on #420day not many Senate candidates admit to having smoked weed. I’m not most Senate candidates. I’ve been thinking a lot about whether to launch this video where I light up. It’s an issue that’s personal & important to me & so many. #LegalizeIt ➡️ https://t.co/V7VA5PhQpi pic.twitter.com/WaNq01yH49

McDermott, who served in the U.S. Navy, made a point to say that “veterans deserve this,” and he knows “many” veterans who’ve used cannabis to treat symptoms of anxiety and post-traumatic stress disorder.

The ad’s launch coincides with the start of a four-day, statewide tour that the Indiana Democratic Party is organizing to raise awareness about the issue and the need to end prohibition in the state. McDermott will be participating in that tour, alongside advocates with groups like Indiana NORML.

“Here’s the bottom line: We need to legalize marijuana on the federal level. We need to also legalize cannabis in Indiana as well so the Hoosiers can get the health and economic benefits of cannabis,” the candidate said. “That’s the future we all deserve.”

Watch the video to learn why legalizing cannabis is important to me and and if you can, chip in to show your support ➡️ https://t.co/oMJyOcTvo5 pic.twitter.com/dhnv9ifewT

McDermott also talks about marijuana as a key issue on his campaign website:

“Dude, its 2022! Across America, millions of Americans use marijuana to help in the treatment of epilepsy, multiple sclerosis, seizures, Crohn’s disease, Alzheimer’s and cancer. That’s why 31 states, the District of Columbia, and several U.S. territories have legalized it for medical use, including three states that border Indiana (Ohio, Michigan, and Illinois). Furthermore, it’s become very clear that we are on the way to full legalization in most of the country, with 13 states already making marijuana a legal substance and others having decriminalized it. It’s time the federal government recognize that marijuana should be legal and as a U.S. Senator, I will fight to ensure it.”

Since marijuana remains illegal in Indiana, and Democratic legislators have blamed inaction on GOP colleagues unwilling to advance the issue, don’t expect McDermott to light up in Indianapolis for the tour. But the ad reveals a burgeoning willingness to push boundaries while cannabis remains federally prohibited.

Chambers’s first marijuana ad took place in Louisiana, where low-level possession is decriminalized. But he also visited Illinois and filmed a follow-up ad where he visited a drive-thru dispensary.

Enacting legalization in Indiana might be an uphill battle for Democrats in the GOP-controlled legislature, but the state party is making clear that reform is a priority. Several bills were pre-filed to end prohibition this session, but they’ve yet to advance.

“We have seen the impact that recreational and medicinal cannabis use has made on the states around us, and not only are Hoosiers contributing to neighboring states’ economies, Indiana is now on the verge of losing out altogether,” Mike Schmuhl, chairman of the Indiana Democratic Party, said in a press release about the new tour. “It’s unfortunate to see Indiana Republicans have no plan on cannabis, and instead, see them oppose this common sense policy due to partisanship.”

“Democrats have taken the lead on this effort because it’s a win-win for the state’s economy and for Hoosiers altogether,” he said. “Legalizing cannabis will also fulfill Democrats’ consistent promise of creating a better future for our families.”