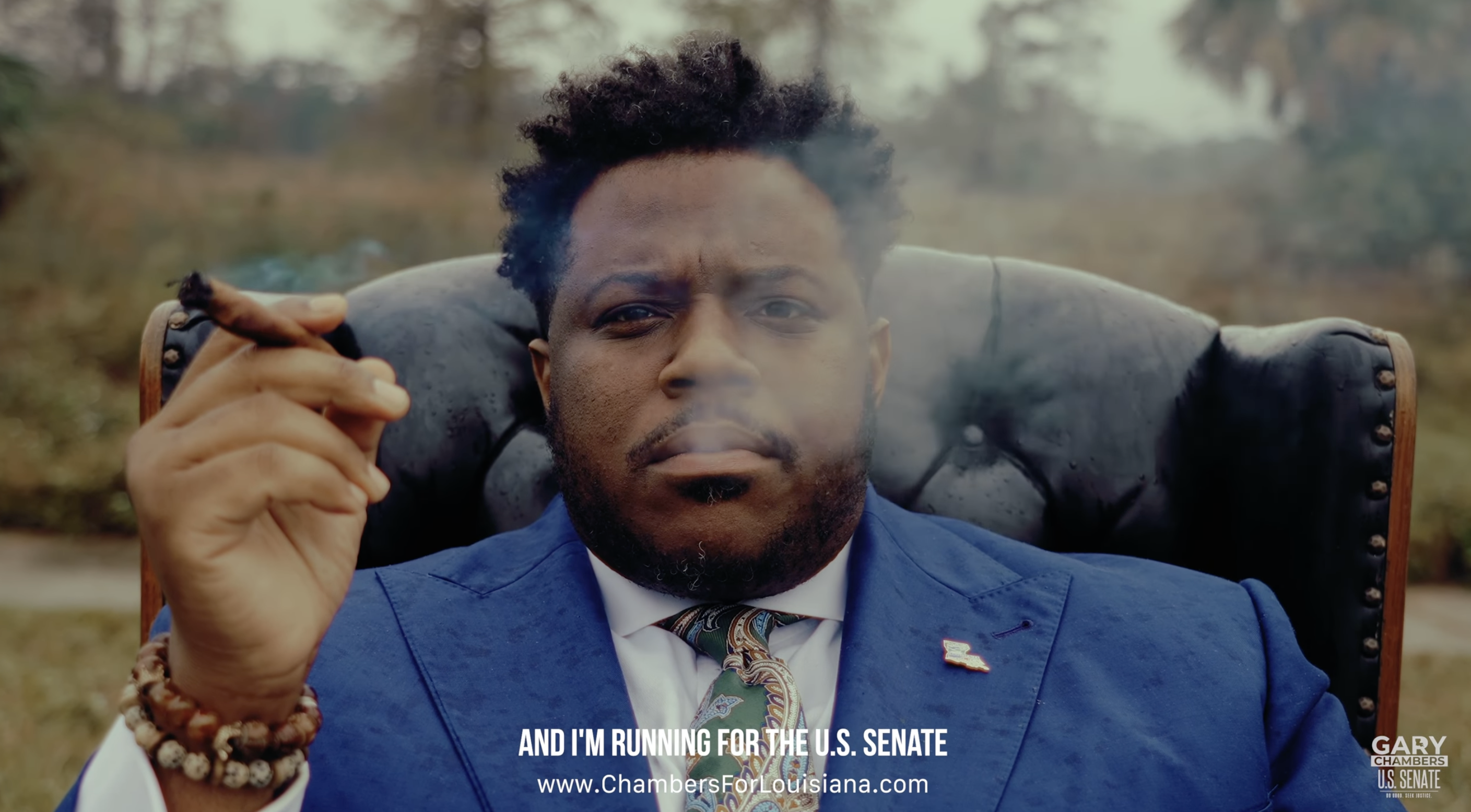 A Democratic candidate running for a U.S. Senate seat in Louisiana continues to make cannabis a centerpiece of his campaign, emphasizing the drug war’s disproportionate harm on Black people and working to remove the stigma from marijuana use generally.

In January, Gary Chambers went viral with a campaign ad featuring himself sitting in a leatherbound armchair and smoking a cigar-sized blunt. On Thursday, he followed that up by posting a video of himself visiting a drive-thru cannabis retailer near Chicago.

“I am in Illinois, and this is a drive-thru dispensary,” the Senate candidate says in the video. “You can pull up and get your grass without ever getting out of your car.”

Chambers has been unapologetic about his enjoyment of cannabis, a trait still rare in elected officials despite many lawmakers’ open acknowledgment of alcohol use. Presumably the difference is due to the fear that marijuana is a political liability, although a supermajority of American voters consistently support legalization in national polls and 58 percent of respondents said in a recent YouGov survey that they would be willing to vote for a candidate “who occasionally smokes marijuana in their free time.”

Chambers’s viral videos pivot on a similar paradox around cannabis. On one hand, admitting to current use is still widely treated as taboo, which no doubt helps drive views. On the other hand, as Chambers alludes to at the end of his latest video at the drive-thru, the industry is now more or less mainstream in much of the country: “It’s business, baby!”

Chambers’s January campaign ad, titled “37 Seconds,” is a reference to a research finding that police in the U.S. on average make one cannabis-related arrest every 37 seconds.

“Black people are four times more likely to be arrested for marijuana laws than white people,” he says in the video. “States waste $3.7 billion enforcing marijuana laws every year. Most of the people police are arresting aren’t dealers, but rather people with small amounts of pot, just like me.”

I hope this ad works to not only destigmatize the use of marijuana, but also forces a new conversation that creates the pathway to legalize this beneficial drug, and forgive those who were arrested due to outdated ideology. pic.twitter.com/G0qKvmUGKD

Louisiana’s governor, Democrat John Bel Edwards, wagged his finger at the move. “The imagery of actually smoking marijuana on an internet ad,” the governor said, “is not something that people should reward him for.”

In a press release accompanying the earlier video, Chambers said he’s supportive of the Harnessing Opportunities by Pursuing Expungement (HOPE) Act, a congressional bill introduced by bipartisan lawmakers in December that would incentivize states and local governments to expunge cannabis records in their jurisdictions.

He also backs the Secure and Fair Enforcement (SAFE) Banking Act, a separate bipartisan bill to protect financial institutions that service state-legal cannabis businesses. That legislation has cleared the House in some form six times but has consistently stalled in the Senate.

The other Democratic challenger in the race is Luke Mixon, a white moderate. He told the Baton Rouge based newspaper The Advocate in January that he has never smoked marijuana. The paper reported that in the aftermath of Chambers’s video, Mixon had been “forgotten for the moment.”

Washington State Gov. Jay Inslee (D) said in 2019 that while he doesn’t smoke marijuana, “I do grow it legally.” A spokesperson later clarified that he was referring broadly to legal cultivation in the state.