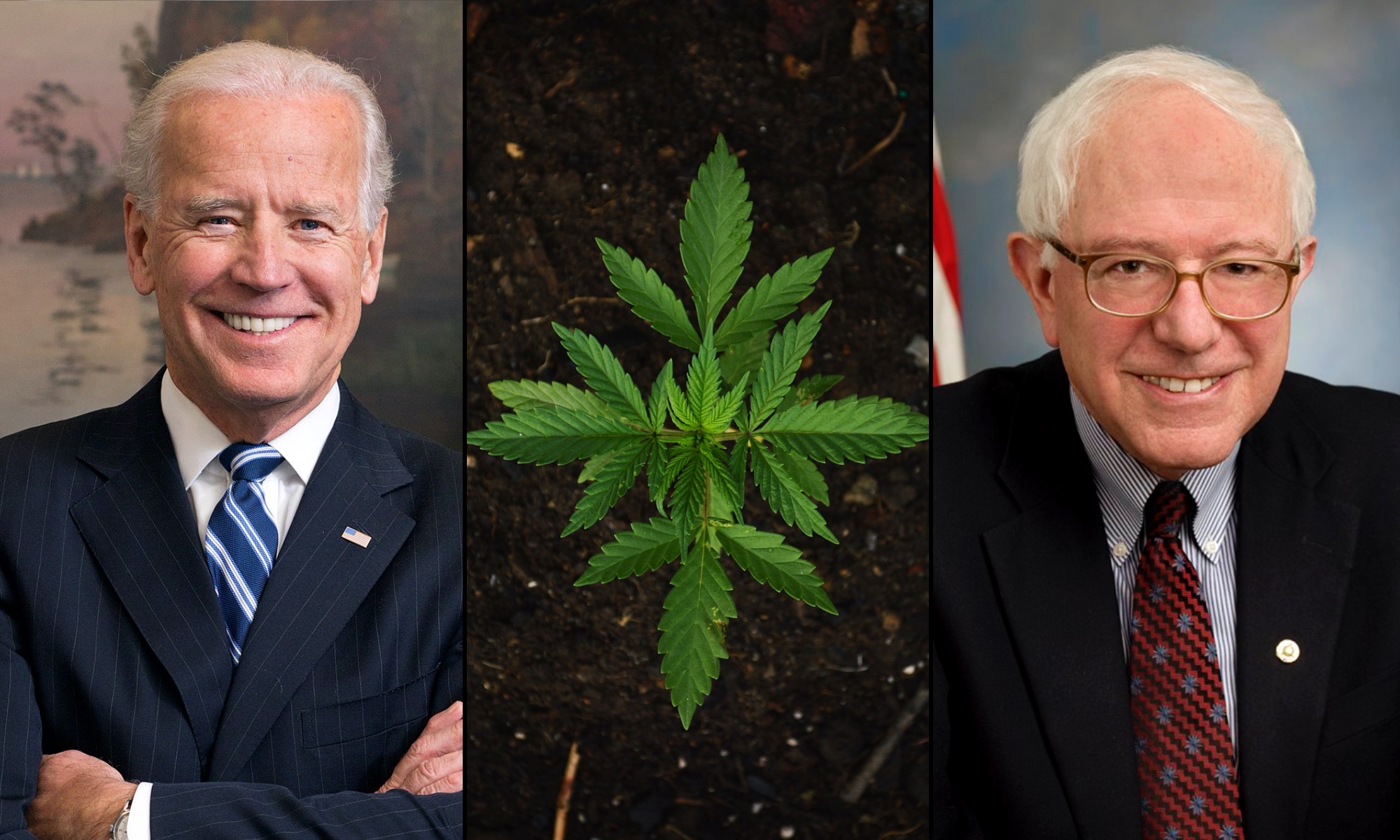 Legalizing marijuana is not among the recommendations made to presumptive Democratic presidential nominee Joe Biden by a criminal justice task force his campaign created in partnership with former 2020 primary rival Sen. Bernie Sanders (I-VT).

Advocates had held out hope that the panel would push the former vice president to join the majority of U.S. voters—and a supermajority of Democrats—in backing legal cannabis. But, despite the fact that most individual members of the Biden-Sanders group have previously gone on record in favor of legalization on an individual basis, its report mostly reiterates the candidate’s existing marijuana position while adding a few specifics.

“Decriminalize marijuana use and legalize marijuana for medical purposes at the federal level. Allow states to make their own decisions about legalizing recreational use. Automatically expunge all past marijuana convictions for use and possession,” the document, released on Wednesday, says.

“Lift budget rider blocking D.C. from taxing and regulating legal marijuana and remove marijuana use from the list of deportable offenses,” it continues. “Encourage states to invest tax revenue from legal marijuana industries to repair damage to Black and brown communities hit hardest by incarceration.”

The 110-page document also says that “Democrats will decriminalize marijuana use and reschedule it through executive action on the federal level.”

“We will support legalization of medical marijuana, and believe states should be able to make their own decisions about recreational use,” it says. “The Justice Department should not launch federal prosecutions of conduct that is legal at the state level. All past criminal convictions for cannabis use should be automatically expunged.”

Legalizing marijuana had reportedly been a topic of discussion and contention for the criminal justice panel, and some members have spoken publicly about their desire for Biden to further evolve his cannabis position since the task force was convened.

“We didn’t reach consensus on legalization. That conversation will have to continue. But we did agree on some important new aspects of marijuana policy for the vice president’s agenda,” Chiraag Bains, a former federal prosecutor who was a member of the criminal justice task force, told Marijuana Moment. “We agreed on lifting the D.C. budget rider to allow the District to regulate and tax marijuana, removing marijuana from the list of deportable offenses and pushing states to invest revenue from the marijuana industry to repair damage to the Black and brown communities that have been most harmed by over-policing and over-incarceration.”

“That last piece is incredibly important,” said Bains, who severs as director of legal strategies for Demos. “These policies will help build racial justice, reduce harm and repair generational damage caused by the racist War on Drugs.”

To that end, the task force document also speaks to broader drug policy issues beyond cannabis.

“It is past time to end the failed ‘War on Drugs,’ which has imprisoned millions of Americans— disproportionately people of color—and hasn’t been effective in reducing drug use,” it says. “Democrats support policies that will reorient our public safety approach toward prevention, and away from over-policing—including by making evidence-based investments in jobs, housing, education, and the arts that will make our nation fairer, freer, and more prosperous.”

While Biden’s campaign put representatives onto the task force and presumably exerted considerable influence on the scope of its report, the document doesn’t necessarily represent new positions supported by the candidate himself; rather, it constitutes recommendations to him and to the Democratic National Committee to consider when drafting its 2020 party platform.

“For the millions of Americans facing hardship due to President Trump’s failed coronavirus response, this election offers the chance to usher in a stronger, fairer economy that works for our working families,” Biden said in a press release. “I commend the Task Forces for their service and helping build a bold, transformative platform for our party and for our country. And I am deeply grateful to Senator Sanders for working together to unite our party, and deliver real, lasting change for generations to come.”

The group called on Biden to “support diversion programs” and “reduce criminal penalties for drug possession and support increased use of drug courts and treatment diversion programs instead of incarceration for those struggling with substance use disorders.”

“The misguided and racist federal war on drugs and the systematic criminalization of poverty means that one in three Black men—and one in six Latino men—will spend time in jail or prison at some point in their lives, reducing their lifetime earnings and making it harder to get a job upon release and build family and community resources,” the recommendation document says.

“Substance use disorders are diseases, not a crimes [sic]. Democrats believe no one should be in prison solely because they use drugs,” it continues. “And rather than involving the criminal justice system, Democrats support increased use of drug courts, harm reduction interventions, and treatment diversion programs for those struggling with substance use disorders.”

Despite the modest reforms included in the document, legalization advocates are not pleased with the end result of the panel’s recommendations.

“It is impractical at best and disingenuous at worst for the Biden campaign to move ahead with these policy proposals,” NORML Executive Director Erik Altieri said. “Rescheduling of marijuana under the Controlled Substances Act would continue to make the federal government the primary dictators of cannabis policy, and would do little if anything to address its criminal status under federal law.”

In February, Biden appeared to mistakenly say marijuana is “at the point where it has to be basically legalized” before correcting himself and insisting that further research be done before he commits to actually supporting policy change beyond the modest reforms such as decriminalization and federal rescheduling he had already backed.

The task force document also touches specifically on the opioid crisis at length:

“The opioid epidemic has devastated American communities, and the Trump Administration has completely failed in its response, leaving millions of families desperate for help. Democrats will make medication-assisted treatment available to all who need it, and will require publicly supported health clinics to offer medication-assisted treatment for opioid addiction. Democrats recognize that incarcerated people suffer from serious mental health and substance use disorders at higher rates than the general population, which is why we will support expanded access to mental health care in prisons and for returning citizens. We will ensure no one is incarcerated solely for drug use, and support increased use of drug courts, harm reduction interventions, and treatment diversion programs for those struggling with substance use disorders.”

Sanders, who during his own campaign had pledged to legalize marijuana nationwide by executive action on his first day in office, said that the report fell short of what he would have recommended but still represents progress.

“Though the end result isn’t what I or my supporters would’ve written alone, the task forces have created a good policy blueprint that will move this country in a much-needed progressive direction and substantially improve the lives of working families throughout our country,” he tweeted.

Though the end result isn't what I or my supporters would've written alone, the task forces have created a good policy blueprint that will move this country in a much-needed progressive direction and substantially improve the lives of working families throughout our country. 2/3

In an interview in April, Sanders declined to list legalizing marijuana among the issues he thought the task force could bring Biden around to supporting.

Democrats’ 2016 platform endorsed rescheduling cannabis, allowing states to set their own laws and “providing a reasoned pathway for future legalization.”

“We support policies that will allow more research on marijuana, as well as reforming our laws to allow legal marijuana businesses to exist without uncertainty,” is said.

Meanwhile, President Trump’s reelection campaign is working to highlight Biden’s long record of supporting harsh drug penalties during his time as a senator and is seeking to position the incumbent as the criminal justice reform candidate.

While Trump has signed modest criminal justice reform legislation and granted clemency to a small number of individuals incarcerated on drug charges, he has also has voiced support for using the death penalty against people who sell drugs and has urged police to be rough with suspects.

When it comes to marijuana, he personally opposes legalization but has said that states should be able to set their own cannabis laws without federal interference and has voiced support for pending legislation to exempt state-legal activity from the Controlled Substances Act.

But his administration has also taken a number of hostile actions when it comes to cannabis.

Trump’s first attorney general, Jeff Sessions, rescinded Obama-era guidance known as the Cole memo. Under that directive, federal prosecutors were advised not to pursue action against people for state-legal cannabis-related activity, except under a limited set of circumstances.

The president has on several occasions released signing statements on spending legislation stipulating that he reserves the right to ignore a long-standing rider that blocks the Department of Justice from interfering with state-legal medical cannabis programs, and he has asked Congress to end the medical marijuana protections as part of his own budget proposals—something the Obama administration also previously did to no avail.

Despite his pledged support for medical cannabis and states’ rights, Trump apparently holds negative views toward marijuana consumption, as evidenced by a leaked 2018 recording in which he said that using cannabis makes people “lose IQ points.”

The Trump administration has also used marijuana as a way to punish immigrants. In 2019, the U.S. Citizenship and Immigration Services issued a memo stating that using marijuana or engaging in cannabis-related activities such as working for a dispensary—even in states where marijuana is legal—is an immoral offense that makes immigrants ineligible for citizenship. That same year the Justice Department issued a notice that it was seeking to make certain cannabis offenses, including misdemeanor possession, grounds to deny asylum to migrants.

Most Republican voters join the vast majority of Democrats in supporting legalizing marijuana, according to Gallup.

Some observers have suspected that Trump could issue a surprise endorsement of cannabis legalization as Election Day approaches as a way to outflank Biden and undermine Democrats’ support from young people in particular. If the president has in fact been considering such a move, the Biden-Sanders task force’s refusal to even recommend legalizing marijuana to the presumptive Democratic nominee presents perhaps his greatest opening on the issue yet.