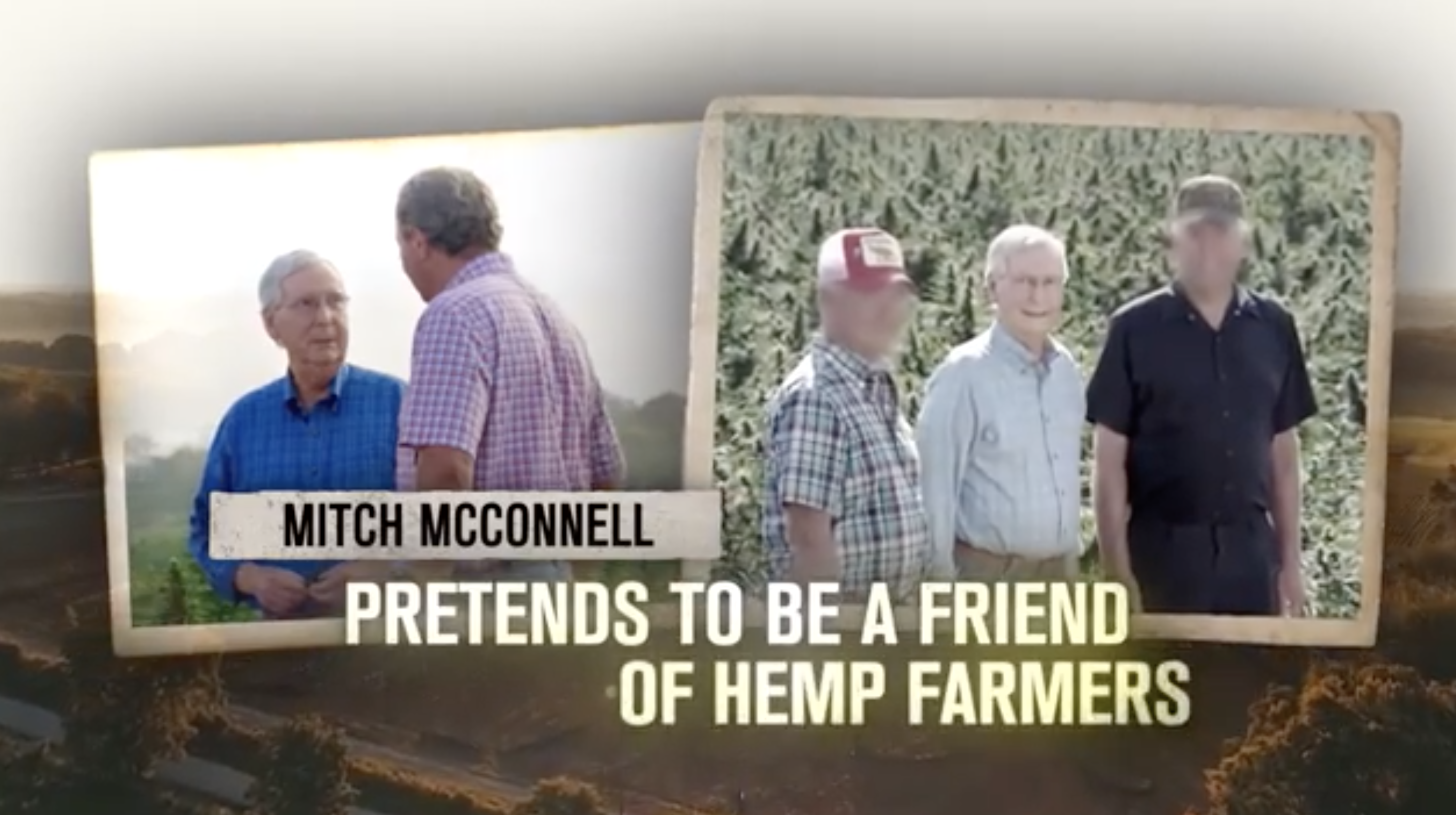 The Democratic candidate challenging Senate Majority Leader Mitch McConnell (R-KY) released a new ad accusing the incumbent of being insincere about his support for the hemp industry. The TV spot also calls out the top GOP lawmaker for promoting a hemp business that filed for bankruptcy amid controversial owed payments.

Amy McGrath, a retired Marine who won the Democratic primary for the Kentucky Senate race in June, is attempting to raise doubts about McConnell’s reputation as an ally of the hemp market. The campaign ad states that the senator “pretends to be a friend of hemp farmers.”

It also criticizes past comments he’s made about GenCanna, a Kentucky-based hemp company that at one point owed millions to creditors and that subsequently filed for bankruptcy. McConnell’s praise of the business came about one year before news of the financial problems surfaced.

Finally, the ad pulls a clip from a recent press conference with Senate Republican leadership, where McConnell said he wasn’t up-to-date on complications hemp farmers were facing in the absence of Food and Drug Administration regulations for CBD products.

“The hemp industry’s struggles in Kentucky are directly traceable to McConnell’s failure and Washington’s dysfunction,” Dan Kanninen, McGrath’s campaign manager, said in a press release about the spot. “This ad emphasizes the ‘bureaucratic paralysis’ that Mitch took no action to address. His inaction was a significant cause of two major Kentucky hemp companies’ bankruptcies.”

Of course, missing from the ad is mention of McConnell’s role in federally legalizing hemp and its derivatives through the 2018 Farm Bill.

Despite his opposition to broader marijuana reform, the senator is an especially vocal advocate for the industry, consistently touting his policy work around the crop—from championing its very legalization in 2018 to pressing federal agencies on the law’s implementation. He’s made the case that hemp represents a viable alternative to tobacco in Kentucky’s agriculture economy.

“I can attest that, without any hyperbole, we wouldn’t have a domestic hemp industry without Senator McConnell: The 2018 Farm Bill’s legalization of the crop is a testament to his unrivaled support for hemp farmers,” Jonathan Miller, general counsel with the U.S. Hemp Roundtable, told Marijuana Moment. “Certainly, this year has been a rocky one for the industry due to federal bureaucratic overreach. But I know from extensive personal experience that McConnell and his excellent staff are focused on policy solutions that will ensure long term progress for the industry.”

It’s clear that McConnell wants voters to view him as the hemp candidate. His campaign released B-roll footage of the majority leader frolicking through a field of cannabis, and he’s done events at hemp companies like one from last week where he encouraged Americans to use hemp-made face masks amid the coronavirus pandemic.

A spokesperson for his campaign pointed Marijuana Moment to a Kentucky Farm Bureau forum he participated in on Monday, where he discussed the ongoing challenges the industry is facing. McGrath was invited to debate the senator at the campaign event but declined, the spokesperson said.

At that event, McConnell said he’s “still optimistic that once the rough start [of the hemp industry] is over, it could be an important thing for Kentucky agriculture.” He was also asked about recent Drug Enforcement Administration proposed rules for hemp and CBD that have sparked concern in the industry, but said he wasn’t familiar with the details and needed to consult with staff, The Courier Journal reported.

McConnell touted what he had done for the hemp industry in this forum. I asked him what he thought of the new DEA rule calling possession of hemp concentrate over .3% THC a Schedule 1 felony like heroin. He said he didn’t know anything about that and would have to ask his staff.

In any case, the McGrath campaign’s ad is yet another example of the significance cannabis policy has taken on this election cycle. Another example comes from Massachusetts, where incumbent Sen. Ed Markey (D-MA) and primary challenger Rep. Joe Kennedy III (D-MA)—both formerly opposed to legalization—have repeatedly emphasized their support for a regulated and equitable marijuana industry and criticized the the other candidate for being slow to evolve on the issue.

McConnell is decidedly not on board with marijuana legalization. McGrath, meanwhile, supports medical cannabis but says more studies should be done before she backs broader reform. Her former primary rival Charles Booker advocated for adult-use legalization and decriminalizing possession of all currently illicit drugs.

The majority leader has criticized Democratic efforts around even more modest reform proposals such as allowing banks to service state-legal marijuana businesses without being penalized by federal financial regulators. He specifically took issue with that measure being included in a coronavirus relief bill approved by the House.

But when it comes to Kentucky in particular, hemp is a big deal. And the bipartisan push to attract farmers who would grow the crop and their would-be customers shows how far the issue has come in the Bluegrass State.