Youth marijuana use dropped in 2020 amid the coronavirus pandemic and as more states moved to enact legalization, a newly released federal survey found.

The latest dataset from the National Survey on Drug Use and Health (NSDUH) is yet another example of a federally backed study challenging the prohibitionist narrative that ending cannabis prohibition for adults will lead to increased underage usage.

Past-year cannabis use for those aged 12-17 dipped from 13.2 percent to 10.1 percent from 2019-2020, the survey, conducted by the Substance Abuse and Mental Health Services Administration (SAMHSA), found. And even for those in the 18-25 age category, past-year use dropped from 35.4 percent to 34.5 percent in that timeframe. 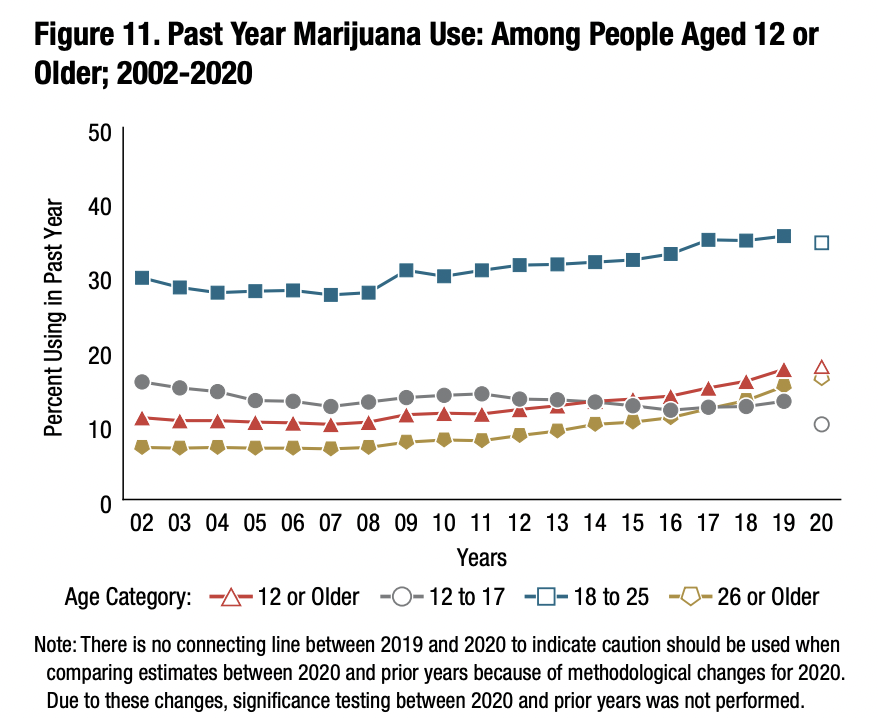 For this latest survey, researchers emphasized that there were changes to methodology due to the COVID-19 pandemic. Interviews were conducted virtually, rather than in person, to ensure safety, for example. Because of the change, “caution should be used when comparing estimates,” they said.

That said, past instances of the annual survey have continually shown that legalization opponents’ predicted spike in youth marijuana use as reform spreads has simply not come to fruition. Past-year cannabis use for adolescents clocked in at 13.5 percent in 2012, when states first began enacting legalization for adult use.

Use by adults aged 26 and older is trending upwards over the past few years, however.

Paul Armentano, deputy director of NORML, told Marijuana Moment that the new federal data again shows that “changes in states’ marijuana policies have not led to any significant rise in cannabis use among young people.”

“Overall, adult-use laws are working the way voters and politicians intended; licensed retailers check IDs and rarely are adult-use products diverted to the illicit marketplace,” he said. “These findings ought to reassure lawmakers that cannabis access can be legally regulated in a manner that is safe, effective, and that does not inadvertently impact young people’s habits.”

Indeed, this is the latest in a growing body of evidence demonstrating that legalization does not lead to increase youth use despite prohibitionist arguments to the contrary.

For example, a study published by the Journal of the American Medical Association in September found that rates of adolescent cannabis consumption does not increase after states enact legalization for medical or recreational use.

National Institute on Drug Abuse (NIDA) Director Nora Volkow also conceded in a recent interview that legalization has not led to increased youth use despite her prior fears.

A federal report released in May also challenged the prohibitionist narrative that state-level marijuana legalization leads to increased youth use.

A federally funded Monitoring the Future report released late last year found that cannabis consumption among adolescents “did not significantly change in any of the three grades for lifetime use, past 12-month use, past 30-day use, and daily use from 2019-2020.”

An official with the White House Office of National Drug Control Policy’s National Marijuana Initiative went even further last year, admitting that, for reasons that are unclear, youth consumption of cannabis “is going down” in Colorado and other legalized states and that it’s “a good thing” even if “we don’t understand why.”

In 2019, for example, a study took data from Washington State and determined that declining youth marijuana consumption could be explained by replacing the illicit market with regulations or the “loss of novelty appeal among youths.” Another study from last year showed declining youth cannabis consumption in legalized states but didn’t suggest possible explanations.