Speaking to a group of lawmakers this week, an official from the White House’s anti-drug office acknowledged that in Colorado and other states that have legalized marijuana for adults, consumption of cannabis by teens has fallen—contrary to fears often expressed by prohibitionists.

“For some reason, the use rate among this age bracket is going down,” said Dale Quigley, deputy coordinator for the National Marijuana Initiative, a project of the High Intensity Drug Trafficking Area (HIDTA) program. “We’re not 100 percent sure why it’s going down. It’s a good thing that it’s going down, but we don’t understand why.”

Quigley’s comments came during a wide-ranging presentation on the impacts of cannabis legalization to a committee of North Dakota lawmakers on Wednesday. The panel is currently engaged in an interim study of the issue while the legislature is out of session and will issue a report later this year with the goal of making lawmakers better prepared to consider legalization when the new session begins next year.

On the subject of teen use, Quigley, who resides in Colorado and has been a law enforcement officer since 1979, told the committee that while he can’t explain the drop in youth use in his state, it matches a trend seen nationally. 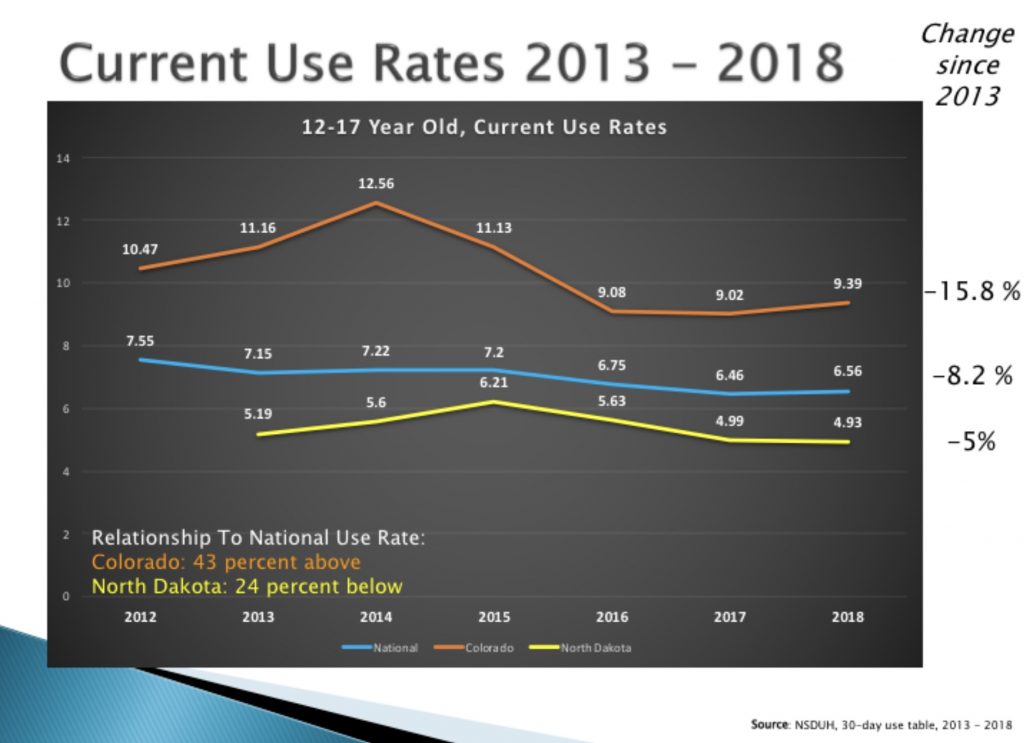 “In looking at the state of Colorado for 12-to-17 year old current use, we had a spike in ’14, but overall the use rates in Colorado have been declining,” he said, “and that matches what we’re seeing in other states and also the trend we’re seeing nationally.”

Data for the presentation came from the U.S. Substance Abuse and Mental Health Services Organization (SAMHSA), which conducts annual surveys on drug use. It defines “current use” as use within the past 30 days.

Quigley’s unit, the National Marijuana Initiative, “strives to dispel misconceptions about marijuana and raise awareness of issues surrounding the drug,” its website says. The group is funded by the HIDTA program, which was established under the White House Office of National Drug Control Policy after Congress’s passage of the Anti-Drug Abuse Act of 1988. The Marijuana Initiative provides speakers on cannabis issues for policymakers and other groups, with presentations that range from 60 minutes to eight hours.

While Colorado and other states have passed laws designed to allow adults legal access to marijuana, a persistent worry among skeptics and anti-drug advocates is legalization’s potential impact on youth use rates.

Despite his acknowledgment that teen use rates appear to have fallen in Colorado and other states since legalization, Quigley bookended those statements with anecdotal and sometimes contradictory claims about youth and marijuana.

Later, after noting that “we’re not 100 percent sure why it’s going down,” Quigley explained the dynamics behind conventional wisdom for why youth use rates should instead be rising.

“What we can see with the kids, according to the data from SAMHSA, is that the perception of harm in marijuana has been consistently going down over the course of time. They don’t see it as being as risky or dangerous to consume,” he said. “When risk and harm go down, and availability goes up, so does use rates.”

It’s not entirely clear from the chart included in Quigley’s presentation whether the perception of marijuana’s harm among youth has indeed “been consistently going down over the course of time,” as he said. The numbers vary from year to year, and none of the included information indicates the trend is statistically significant. Data from older age groups, however, show much more obvious downward trends. 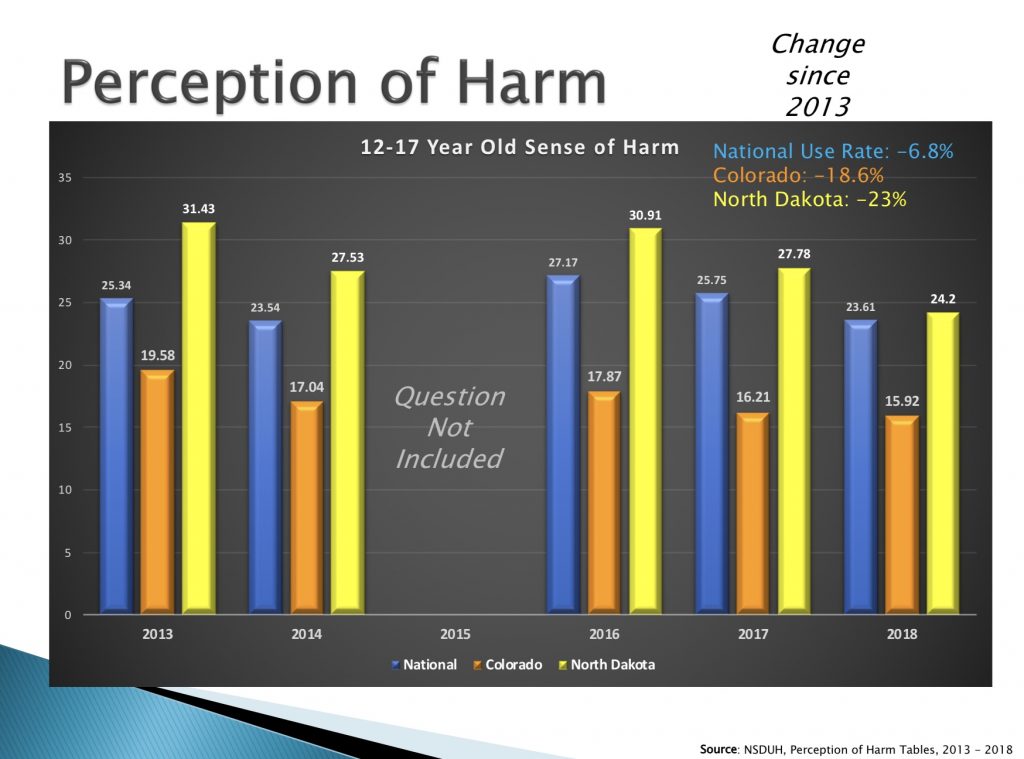 Quigley’s best explanation for the downward trend in teen cannabis use was that children are scared of potent products and vaping—despite his later argument that children are increasingly unconcerned with marijuana’s hazards. “We’re not exactly sure,” he said. “We’re hearing anecdotal stories about kids that are afraid of the potency levels, you know, teens that have had adverse reactions to vaping and concentrates.”

Other studies have looked at teen use rates after legalization and found similar declines—or at least no evidence of an increase. An October 2019 study using data from Washington state explained the dips in teen cannabis consumption in that state as resulting either from increased regulation compared to the illicit market or simply the “loss of novelty appeal among youths.” A study from earlier last year, published in JAMA Pediatrics, also found modest declines in youth marijuana use but didn’t reach a conclusion on what caused the reductions.

Quigley’s remarks about usage rates to North Dakota lawmakers begin at approximately the 9:22 AM marker into the archived video of Wednesday’s Judiciary Committee hearing, and slides from his accompanying presentation can also be viewed on the legislature’s website.

The committee is expected to issue a report on marijuana legalization sometime this fall, likely in November.

Meanwhile, two separate efforts to legalize cannabis for North Dakota adults didn’t gain enough traction for the 2020 ballot, but organizers say they’ll refocus their efforts on 2022. A proposed initiative from Legalize ND was delayed after the coronavirus pandemic hampered signature-gathering efforts, and a second group announced this week that it has also failed to get a sufficient number of signatures to qualify its measure for this November.