As lawmakers work to enact cannabis reform in the coming year, the survey from Goucher College shows a strong majority of the public (60 percent) is in favor of the policy.

But while legalization earned more support than Biden (53 percent) or either Democratic senators, Chris Van Hollen (44 percent) and Ben Cardin (46 percent), that majority support is seven percentage points lower than when Marylanders were last asked about it in March.

There’s a notable, partisan gap in attitudes toward cannabis reform, with 65 percent of Democrats saying they back legalization, compared to 48 percent of Republicans. Sixty-three percent of independents are also on board. Gov. Larry Hogan (R) proved more popular (68 percent) than legalization in this latest poll.

Regardless, the policy still enjoys significant majority support from the public—and that could further embolden legislators to take up the issue. 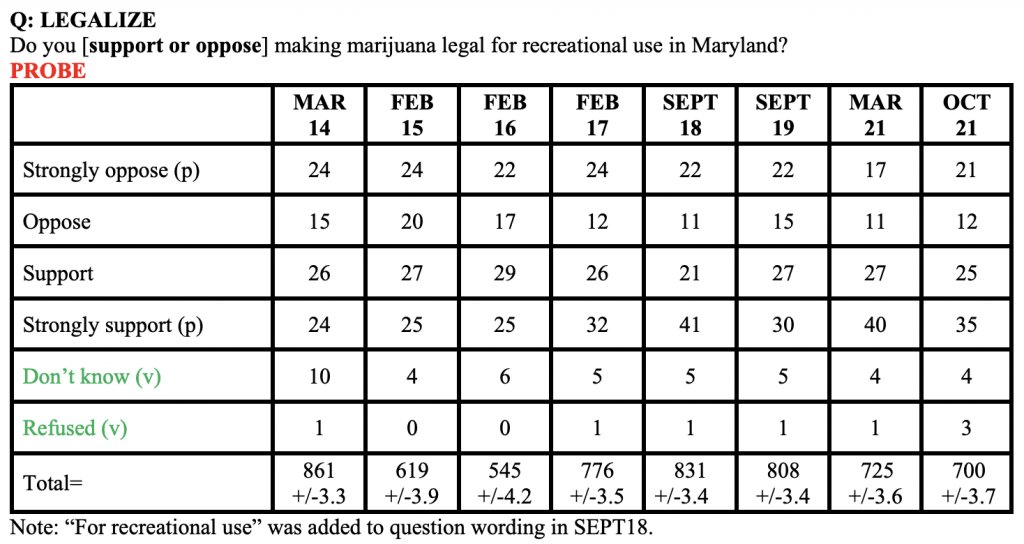 A 10-member working group, which was appointed by House Speaker Adrienne Jones (D) earlier this year, has already taken initial steps to explore the reform, with plans in the works to place a legalization referendum before voters next year.

The House Cannabis Referendum and Legalization Workgroup held its first meeting last month. Members broadly discussed the history of reform throughout the country at that introductory session.

Then earlier this month, the group met again and heard from a top federal drug official on recent data on cannabis use trends.

The House speaker formed the working group in conjunction with an announcement that she plans to pass legislation “early” in 2022 to put the question of legalization directly to voters as a referendum question.

Senate President Bill Ferguson (D), meanwhile, said in July that the reform is “beyond past due” in the state— but he seemed reluctant to embrace a referendum process and instead wants to pass a bill to end cannabis prohibition sooner than next November.

The top Senate lawmaker also pointed out that he co-chaired an earlier workgroup on marijuana policy in 2019, and that panel had already “identified the key decision points and models for legalization in Maryland.”

Legalization legislation did start to advance through the legislature during the 2021 session, but no votes were ultimately held.

The Senate Finance Committee held a hearing in March on a legalization bill sponsored by Ferguson, the majority leader and key committee chairs. That followed a House Judiciary Committee hearing on a separate cannabis proposal in February.

Lawmakers had worked to reconcile the differences between the House and Senate proposals in the hopes of getting something to the desk of the governor, who has not endorsed legalization but has signaled he may be open to considering the idea.

Pressure to enact the reform is also building regionally. Marijuana legalization took effect in Virginia in July, for example.

Also last year, the governor vetoed a bill that would have shielded people with low-level cannabis convictions from having their records publicized on a state database. In a veto statement, he said it was because lawmakers failed to pass a separate, non-cannabis measure aimed at addressing violent crime.

In 2017, Hogan declined to respond to a question about whether voters should be able to decide the issue, but by mid-2018 he had signed a bill to expand the state’s medical marijuana system and said full legalization was worth considering: “At this point, I think it’s worth taking a look at,” he said at the time.