A top federal drug official on Wednesday offered some advice to Maryland lawmakers who are exploring marijuana legalization in anticipation of placing a referendum on the issue before voters next year.

At a meeting of the House Cannabis Referendum and Legalization Workgroup, which held its first meeting last month, Susan Weiss of the National Institute on Drug Abuse (NIDA) discussed recent data on cannabis use trends, acknowledging that underage consumption rates have remained stable amid the success of the state-level legalization movement, but also offering words of caution about the risks of cannabis commercialization.

Importantly, however, she seemed to acknowledge the inevitability of legalization in Maryland in a growing number of states by taking the time to advise lawmakers on key policy areas they can consider as they craft legalization legislation.

Weiss said that it’s “really important to keep the medical side of this different [from recreational legalization] and to be paying attention to the products that people are using and how they’re using it.”

She told lawmakers that there are some concerns about increased frequency of use among young adults, rising THC potency in cannabis products available in state markets and prenatal exposure to marijuana. NIDA Director Nora Volkow similarly said she was worried about those trends in a recent interview with Marijuana Moment.

“Because of the way this [reform movement] has been evolving—because the federal because it’s still federally illegal—the states vary a lot in terms of how they are enacting new policies,” Weiss, who is director of NIDA’s extramural research division, said.

Notably, Weiss acknowledged that social equity is an “incredibly important issue” and pointed out that criminal records for cannabis “can really drastically affect…opportunities in life.”

But the NIDA official has concerns with legalization, telling members of the panel that state officials considering enacting the policy should recognize that “there is a lot of flexibility in regulations in terms of how [reform is] implemented.” For one thing, she said lawmakers should think about non-commercial forms of legalization to avoid creating a profit-driven industry that is motivated to increase use.

Again, federal data has shown repeatedly that rates of underage consumption have remained stable despite the growing commercialization of cannabis for adults in a growing number of states.

Nonetheless, Weiss told lawmakers at the hearing that states should consider a series of policies to mitigate the risk of youth access to cannabis and other concerns, including serving size and potency limitations, labeling requirements, product testing mandates, marketing restrictions and steering tax revenue to health efforts.

A slide from Weiss’s presentation: 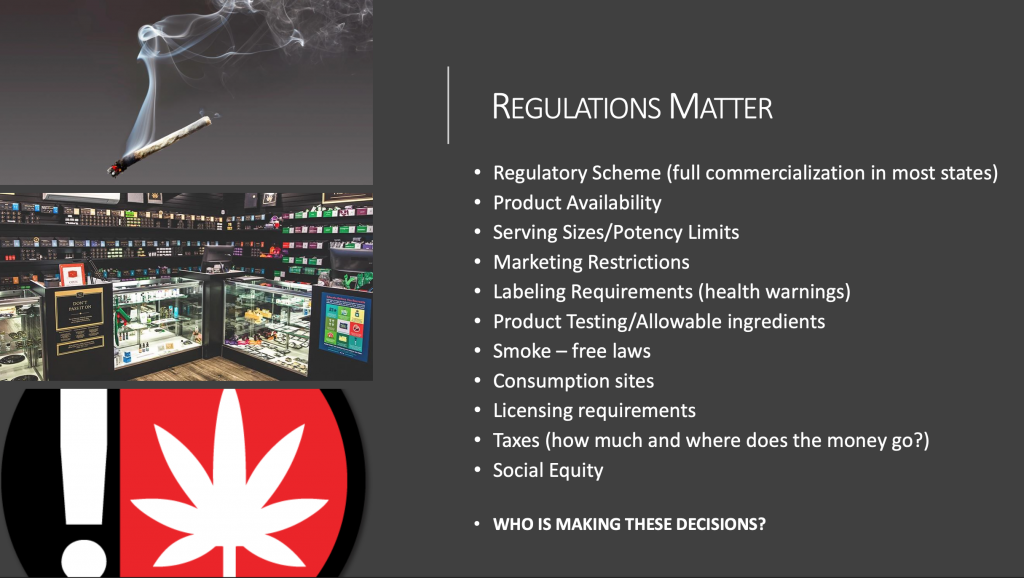 Weiss described the need to allow areas where people can legally consume cannabis as an equity issue. Without a public consumption option for marijuana consumers, she said, “there is an inherent bias” that limits access to people with homes or certain apartments whose landlords accept usage at their properties while others who live in public housing, for example, risk eviction. “So there’s a social equity issue there,” she said.

Still, she reiterated her view that marijuana use is not something policymakers should take lightly.

“The bottom line to me at this point is that the risks [of marijuana] to some are very serious—not to all, but to some,” she said. And when it comes to developing regulations for a state cannabis market, she argued that it’s important to lean heavily on the advice of health professionals, rather than industry stakeholders.

Happening now: The House Cannabis Legalization Workgroup is meeting and hearing about the actual science of cannabis. Because drug policy should be made based on reality and not rhetoric. pic.twitter.com/NlQgDm7zwY

“Regulations matter, and they can help mitigate some of the potential harms,” Weiss said. “I think it’s important that if adult-use legalization goes into effect that there are also strong public health campaigns that are in place when laws change, and baseline data should be collected now before changes in the laws go into effect.”

Weiss also said lawmakers should not allow marijuana business operatives to be involved in setting or overseeing the implementation of regulations on the industry. On a similar note, she expressed concern that federal legalization could lead to large alcohol and tobacco companies becoming more involved in the cannabis sector.

The official separately said that she didn’t “want to get into gateway issues” of cannabis consumption leading people to seek out other drugs, but she does think there’s “an association” between use of marijuana and other drugs.

The NIDA official’s testimony was heard by a 10-member group, which was appointed by House Speaker Adrienne Jones (D) earlier this year. The panel will be looking at the issue of legalization from a variety of perspectives as lawmakers continue to pursue reform in the Free State.

The speaker formed the working group in conjunction with an announcement that she plans to pass legislation “early” in 2022 to put the question of legalization directly to voters as a referendum question.

Senate President Bill Ferguson (D), meanwhile, said in July that the reform is “beyond past due” in the state— but he seemed reluctant to embrace a referendum process and instead wants to pass a bill to end cannabis prohibition sooner than next November.

The top Senate lawmaker also pointed out that he co-chaired an earlier workgroup on marijuana policy in 2019, and that panel had already “identified the key decision points and models for legalization in Maryland.”

Legalization legislation did start to advance through the legislature during the 2021 session, but no votes were ultimately held.

The Senate Finance Committee held a hearing in March on a legalization bill sponsored by Ferguson, the majority leader and key committee chairs. That followed a House Judiciary Committee hearing on a separate cannabis proposal in February.

Lawmakers had worked to reconcile the differences between the House and Senate proposals in the hopes of getting something to the desk of Gov. Larry Hogan (R), who has not endorsed legalization but has signaled he may be open to considering the idea.

As Maryland lawmakers considered the two marijuana legalization bills this past session, a poll found that the state’s residents are on board with the policy change. Two-thirds (67 percent) of Marylanders now back legalizing cannabis, according to a Goucher College survey. Just 28 percent are opposed.

Pressure to enact the reform is also building regionally. Marijuana legalization took effect in Virginia in July, for example.

Also last year, the governor vetoed a bill that would have shielded people with low-level cannabis convictions from having their records publicized on a state database. In a veto statement, he said it was because lawmakers failed to pass a separate, non-cannabis measure aimed at addressing violent crime.

In 2017, Hogan declined to respond to a question about whether voters should be able to decide the issue, but by mid-2018 he had signed a bill to expand the state’s medical marijuana system and said full legalization was worth considering: “At this point, I think it’s worth taking a look at,” he said at the time.