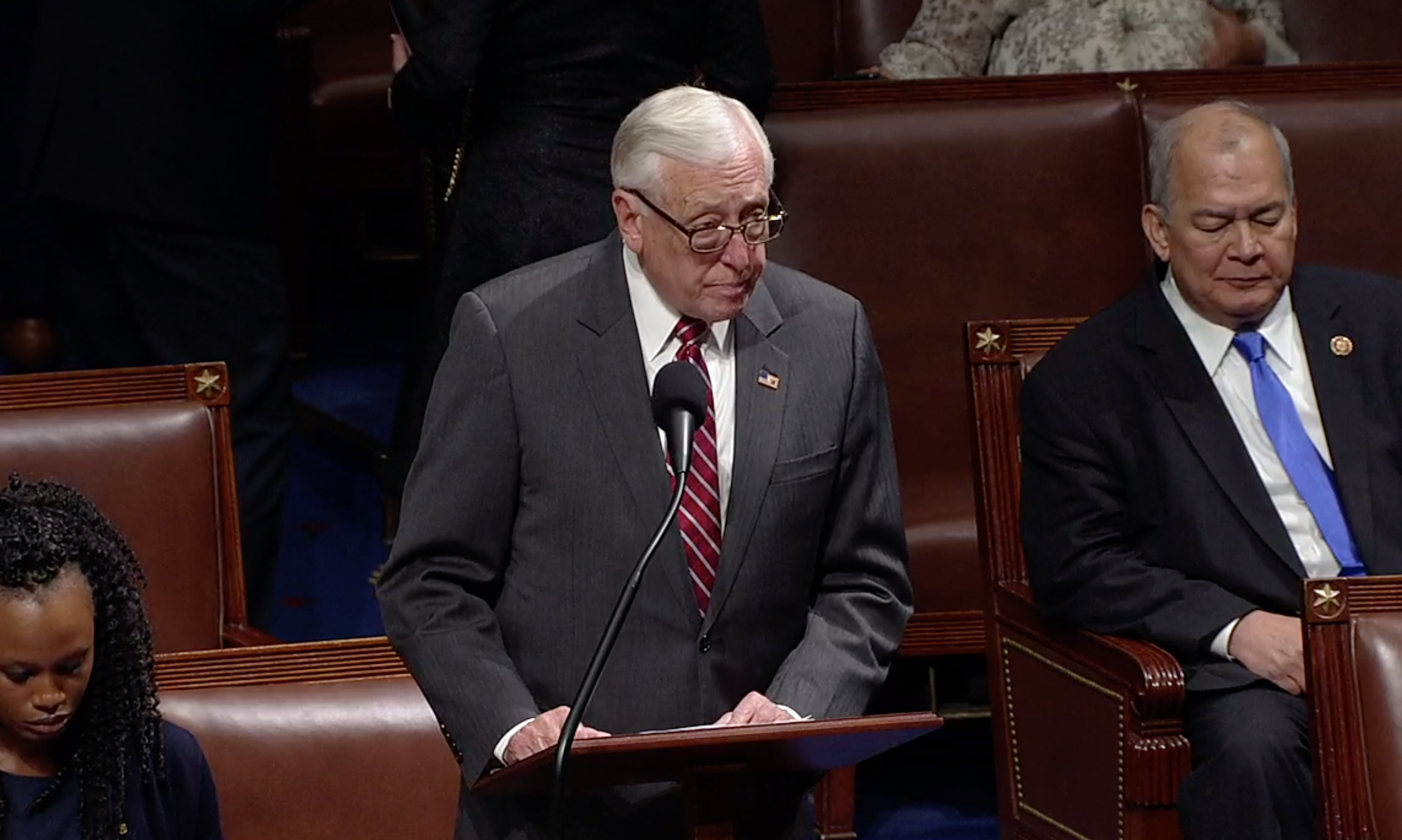 House leadership confirmed on Friday that a bipartisan marijuana banking bill will receive a floor vote next week despite objections from several leading advocacy groups who want broader justice-oriented cannabis reforms to advance before what they see as an industry-focused proposal.

The Secure and Fair Enforcement (SAFE) Banking Act, which cleared the Financial Services Committee in March, will be voted on through a process known as suspension of the rules, requiring two-thirds of the chamber (290 members) to support it for passage.

Majority Leader Steny Hoyer (D-MD) announced the scheduling of the vote in remarks on the House floor on Friday morning.

“We will consider several bills under suspension of the rules, including H.R. 1595, the SAFE Banking Act of 2019, as amended.”

A staffer for his office told Marijuana Moment that they “expect it on the Floor on Wednesday.”

No amendments will be allowed on the floor, but the bill’s sponsor, Rep. Ed Perlmutter (D-CO) is moving to make a series of changes ahead of the vote in order to broader its GOP appeal. That includes adding language clarifying that banks that service hemp and CBD business as well as marijuana firms would be protected from being penalized by federal financial regulators.

“After six years of working on this bill, the SAFE Banking Act will go a long way in providing certainty for financial institutions to work with cannabis businesses and getting cash off our streets to make our communities safer,” Ashley Verville, communications director for Perlmutter, told Marijuana Moment following Hoyer’s announcement.

“We are very pleased that the broad support for this much-needed reform has finally led to a vote,” Morgan Fox, media relations director for the National Cannabis Industry Association, told Marijuana Moment. “Small businesses cannot afford to delay access to financial services, and every day that traditional lending and banking is denied to the cannabis industry is another day that marginalized communities will continue to be left behind by the opportunities created in legal cannabis markets.”

“The time to act is now, and success next week will only improve our chances for more comprehensive reforms in the future,” he said.

“We applaud the House for taking up this vital piece of cannabis policy reform that will greatly increase public safety within the markets we operate, while helping to address some of the challenges that we face regarding equity,” he said.

While advocates initially expected a floor vote to be scheduled prior to the summer recess, that didn’t materialize. Hoyer announced last week that he intended to get a vote before the end of September.

As outlined in the colloquy between @LeaderHoyer and @SteveScalise, next week the House will consider:
•Suspension bills including HR 1595 – SAFE Banking Act of 2019… (1/2)

The announcement sparked a debate within advocacy circles, however. Groups including the ACLU, Human Rights Watch (HRW) and Drug Policy Alliance (DPA) wrote a letter urging leadership to delay the vote on banking—legislation viewed as primarily favorable to the industry—until comprehensive marijuana reform is passed first.

“This is disappointing news,” Queen Adesuyi, policy coordinator for DPA, told Marijuana Moment about Hoyer’s vote announcement. “We will continue to talk with leadership, members, and allies on next steps.”

While Democrats have largely embraced marijuana reform, including the banking bill, frustration over the order in which the House tackles cannabis legislation has led to some dissent within the party and its constituencies, potentially jeopardizing the chances that the SAFE Banking Act will garner the required 290 votes. For example, Rep. Alexandria Ocasio-Cortez said on Thursday that she may vote against the bill if the chamber doesn’t first tackle social equity issues.

“She feels strongly that addressing racial justice should be the first priority,” a staffer for the congresswoman told Marijuana Moment.

Groups that backed delaying the vote have yet to decide on next steps since the scheduling announcement.

DPA Director of National Affairs Michael Collins told Marijuana Moment that “no decision has been made” in terms of whether the organization will urge lawmakers to vote against the bill on the floor without broader reform measures advancing first.

“Pushing for delay still,” she said.

Late on Friday, Hoyer’s office formally listed the planned vote on the SAFE Banking Act on next week’s floor calendar.

Lawmakers such as House Financial Services Chair Maxine Waters (D-CA) and Perlmutter told Marijuana Moment this week that while they share the groups’ desire for broader cannabis legislation, there’s been a lack of movement within the Judiciary Committee to advance a legalization bill from its chair, Rep. Jerrold Nadler (D-NY), and so lawmakers are in a bind.

“SAFE Banking is a narrowly focused bill that serves as the ice breaker for this Congress to take up additional marijuana legislation,” Verville, from Perlmutter’s office, said. “We appreciate the strong broad, bipartisan coalition of support behind this bill, and look forward to the vote next week.”

Senate Minority Leader Chuck Schumer (D-NY) said on Thursday that he agrees with the sentiment expressed in the advocacy letter, writing that “Congress should not enact banking reform alone and think the job is done.” He didn’t specify whether he also wanted a vote to be delayed, however.

Sen. Cory Booker (D-NJ) didn’t specifically mention the banking bill, but in a tweet published hours after the House vote was announced, he reiterated his stance that “any marijuana legislation moving through Congress must include restorative justice for those most harmed by the War on Drugs in order to get my vote.”

As I said earlier this year, any marijuana legislation moving through Congress must include restorative justice for those most harmed by the War on Drugs in order to get my vote.https://t.co/Y1dOwgHbm2

Justin Strekal, political director for NORML, which supports moving forward with the banking bill while broader legislation is worked out, told Marijuana Moment that the House vote next week “is an important first step by Congress.”

“But much more action will still need to be taken in order to ultimately comport federal law with the new political and cultural realities surrounding marijuana,” he added.

While some advocates have raised concerns about the timing of the banking vote, there’s been widespread support for the legislation among financial associations and state officials.

They’re joined by 50 state banking associations, the National Association of State Treasurers, the top financial regulators of 25 states, a majority of state attorneys general and bipartisan governors of 20 states, all of which have backed the SAFE Banking Act this year.

If the banking bill clears the House next week, it’s prospects remain uncertain in the Republican-controlled Senate. Though certain key senators such as Banking Chairman Mike Crapo (R-ID) have recently indicated that they’re inclined to pursue a legislative fix to the issue, GOP lawmakers have generally not had the same appetite for marijuana reform as their Democratic colleagues.

That said, the chairman revealed last week that he plans to hold a vote on cannabis banking legislation in his panel before the year’s end, and Perlmutter’s proposed amendments are likely to increase Senate leadership’s interest in taking up the SAFE Banking Act. Crapo is an especially strong proponent of preventing financial regulators from targeting certain industries such as gun sellers, which the bill will now address.

However, Crapo’s communications director told Marijuana Moment on Friday that there are “no plans to mark anything up/hold a vote at this time.”

Meanwhile, Senate Majority Leader Mitch McConnell (R-KY) is a fierce advocate for the hemp and CBD industries, and he may be persuaded to put the legislation to a vote since it includes explicit protections for those businesses even if he personally opposes broader marijuana reform.

This story has been updated to include comments from lawmakers and advocates.