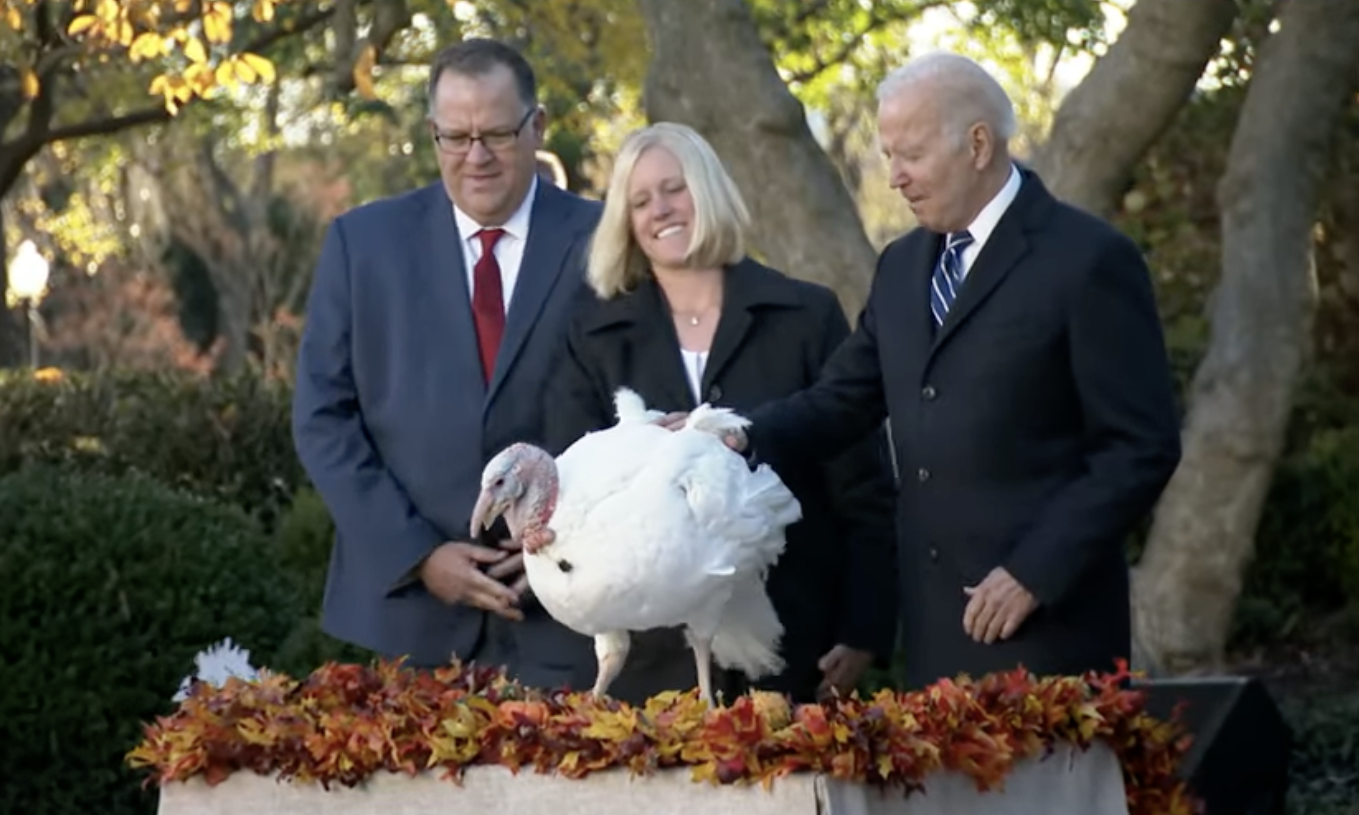 President Joe Biden ceremonially pardoned a pair of turkeys on Friday ahead of next week’s Thanksgiving holiday. But asked whether he’d also extend clemency to people incarcerated in federal prison over marijuana offenses, the president and administration officials didn’t have much to say.

When Steven Nelson of the New York Post directly pressed Biden on whether he would be pardoning “any people in addition to turkeys,” the president treated the question as a joke.

“You need a pardon?” the president quipped to the reporter. He didn’t reply to a follow-up question about marijuana prisoners as he walked away from assembled journalists.

During a separate briefing on Friday, White House Press Secretary Jen Psaki was also pressed on the issue by Nelson.

Psaki replied that she has “nothing new to update you on.”

“But the president is, of course—will look into the use of his clemency powers,” she added. “He’s talked about his approach, or his view, on non-violent drug offenders, but I don’t have anything to update you on on that today.”

It was a different tone than when the press secretary responded to a separate question about the Thanksgiving turkeys. When another reporter asked where the birds will go after they’re ceremonially pardoned, she said it was “an important question,” noting that the birds stayed in a hotel prior to Friday’s event.

All told, the episode speaks to the frustration of many advocates who have grown impatient with the president, who has served ten months in the Oval Office without having exercised his executive authority to fulfill his cannabis campaign pledge.

“Every day that goes by without pardon action, President Biden is breaking the promise he made to Senator Cory Booker and the American public in his campaign for the presidency,” Justin Strekal, political director of NORML, told Marijuana Moment. “He should pardon people, not just birds.”

While Biden’s opposition to adult-use marijuana legalization is well known, activists have been holding out hope that he would at least move ahead with a clemency effort for those who continue to serve time in federal prison over cannabis.

The non-comments from the president and White House officials come about a week after a group of senators sent a letter urging President Joe Biden to use his executive authority to grant a mass pardon for people with non-violent marijuana convictions.

Sen. Elizabeth Warren (D-MA), who led that letter, said during a new interview that Biden could boost the economy and promote racial equity with the “stroke of a pen” by granting the relief.

Early in his administration, Biden received a letter from 37 members of Congress that called on him to use executive authority to mass pardon all people with non-violent federal marijuana convictions.

The ask for this unique form of presidential clemency is modeled on actions taken by Presidents Gerald Ford and Jimmy Carter in the 1970s to categorically forgive Americans who avoided the draft for the Vietnam War.

At the same time that this trio of senators is pushing for a blanket pardon, lawmakers in both chambers are hoping to advance comprehensive legislation to end prohibition.

Warren and Sen. Cory Booker (D-NJ) separately sent a letter to the attorney general last month, making the case that the Justice Department should initiate a marijuana descheduling process in order to “allow states to regulate cannabis as they see fit, begin to remedy the harm caused by decades of racial disparities in enforcement of cannabis laws, and facilitate valuable medical research.”

The White House said in August that the president was looking into using his executive authority to grant clemency to people with certain non-violent drug convictions. But apparently there’s nothing new to report to that end as of Friday.

Instead, Biden reserved his clemency power for the turkeys.

“By the power vested in me as president of the United States, I pardon you,” he told the birds. “I pardon you this Thanksgiving.”

Biden has faced criticism from drug policy reform advocates who’ve grown frustrated that he’s yet to make good on campaign promises such as decriminalizing marijuana possession. The president also campaigned on expunging prior cannabis records and respecting the rights of states to set their own laws.

Since taking office, however, his administration has made little progress on any of those pledges and has instead fired its own White House staffers over marijuana and sought to extend a budget provision that has blocked Washington, D.C. from legalizing cannabis sales.

In April, Psaki was pressed on Biden’s clemency promise for people with federal marijuana and said that process will start with modestly rescheduling cannabis—a proposal that advocates say wouldn’t actually accomplish what she’s suggesting.

Moving cannabis from Schedule I to Schedule II under the Controlled Substances Act, as Biden is proposing, wouldn’t facilitate mass clemency given that being convicted for crimes related to drugs in that slightly lower category—which currently includes cocaine—also carries significant penalties.