Youth marijuana use “decreased significantly” in 2021, as did teen consumption of illicit substances overall, according to a federally funded survey that was released on Wednesday. That’s despite the fact that more state cannabis legalization laws are being enacted and implemented across the country.

The Monitoring the Future (MTF) survey, which has been tracking adolescent drug behavior and attitudes since 1975, revealed a large drop in past-year cannabis use among 8th, 10th and 12th graders this year. 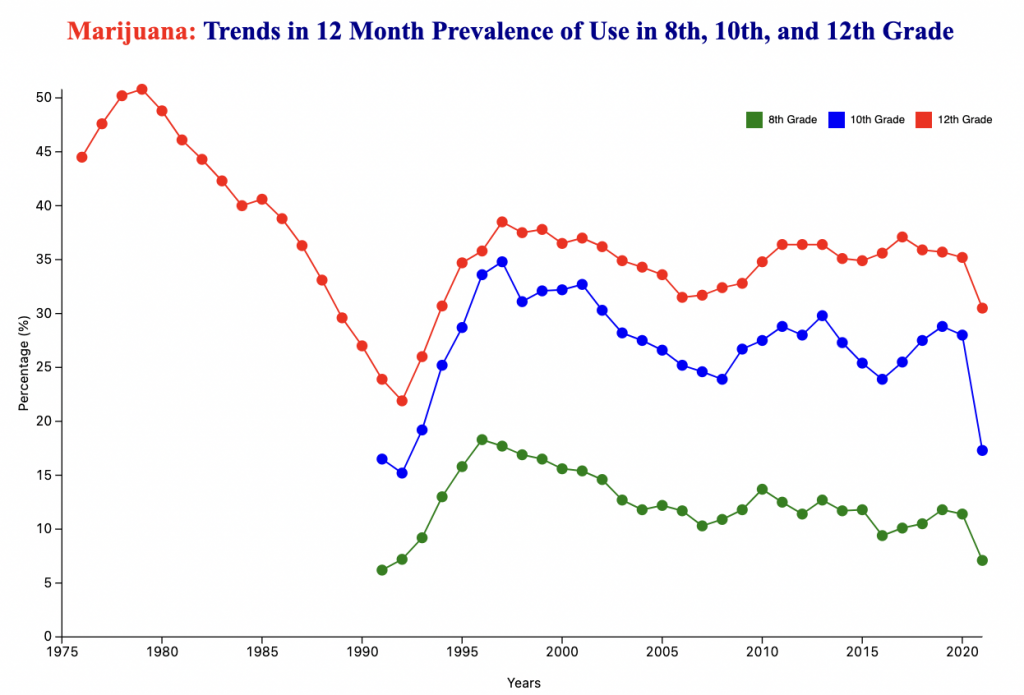 And while the coronavirus pandemic limited social interaction in a way that likely contributed to the abrupt dip, the new data provides more evidence supporting the argument that legalizing marijuana for adults doesn’t lead to increased underage usage.

Here’s how past-year cannabis use changed for each age category from 2020 to 2021:

Lifetime, 30-day and daily cannabis use among adolescents similarly dropped this year.

The use of alcohol, nicotine vaping and all other illicit drugs also “decreased significantly,” the survey, funded by the National Institute on Drug Abuse (NIDA) and conducted by researchers at the University of Michigan, found. 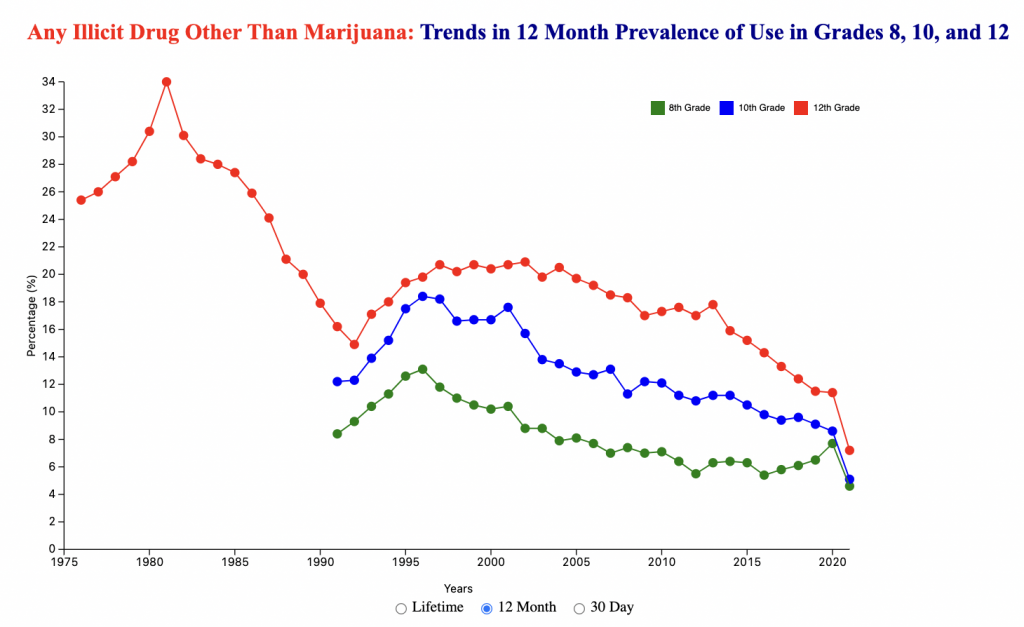 The drop in past-year cannabis use is notably steeper compared to consumption of all other illicit drugs.

“We have never seen such dramatic decreases in drug use among teens in just a one-year period. These data are unprecedented and highlight one unexpected potential consequence of the COVID-19 pandemic, which caused seismic shifts in the day-to-day lives of adolescents,” NIDA Director Nora Volkow said in a press release.

“Moving forward, it will be crucial to identify the pivotal elements of this past year that contributed to decreased drug use—whether related to drug availability, family involvement, differences in peer pressure, or other factors—and harness them to inform future prevention efforts,” she said.

The survey, which involved self-reporting by 32,260 students across 319 schools from February to June, is another example of how the prohibitionist narrative that marijuana legalization would increase youth use isn’t holding water.

“These latest findings add to the growing body of scientific literature showing that marijuana regulation policies can be implemented in a manner that provides access for adults while simultaneously limiting youth access and misuse,” Paul Armentano, deputy director of NORML, said in a press release.

The 2020 MTF survey also found that cannabis consumption among adolescents “did not significantly change in any of the three grades for lifetime use, past 12-month use, past 30-day use, and daily use from 2019-2020.”

In fact, it seems that establishing certain regulated cannabis models might actually lead to lower marijuana use among adolescents under certain measures.

Volkow herself also conceded in a recent interview that legalization has not led to increased youth use despite her prior fears. A federal report released in May also challenged the prohibitionist narrative around under marijuana consumption.

With respect to this latest MTF survey, White House Office of National Drug Control Policy (ONDCP) Director Rahul Gupta said that the “Biden-Harris Administration is committed to using data and evidence to guide our prevention efforts so it is important to identify all the factors that may have led to this decrease in substance use to better inform prevention strategies moving forward.”

“The Administration is investing historic levels of funding for evidence-based prevention programs because delaying substance use until after adolescence significantly reduces the likelihood of developing a substance use disorder,” he said.