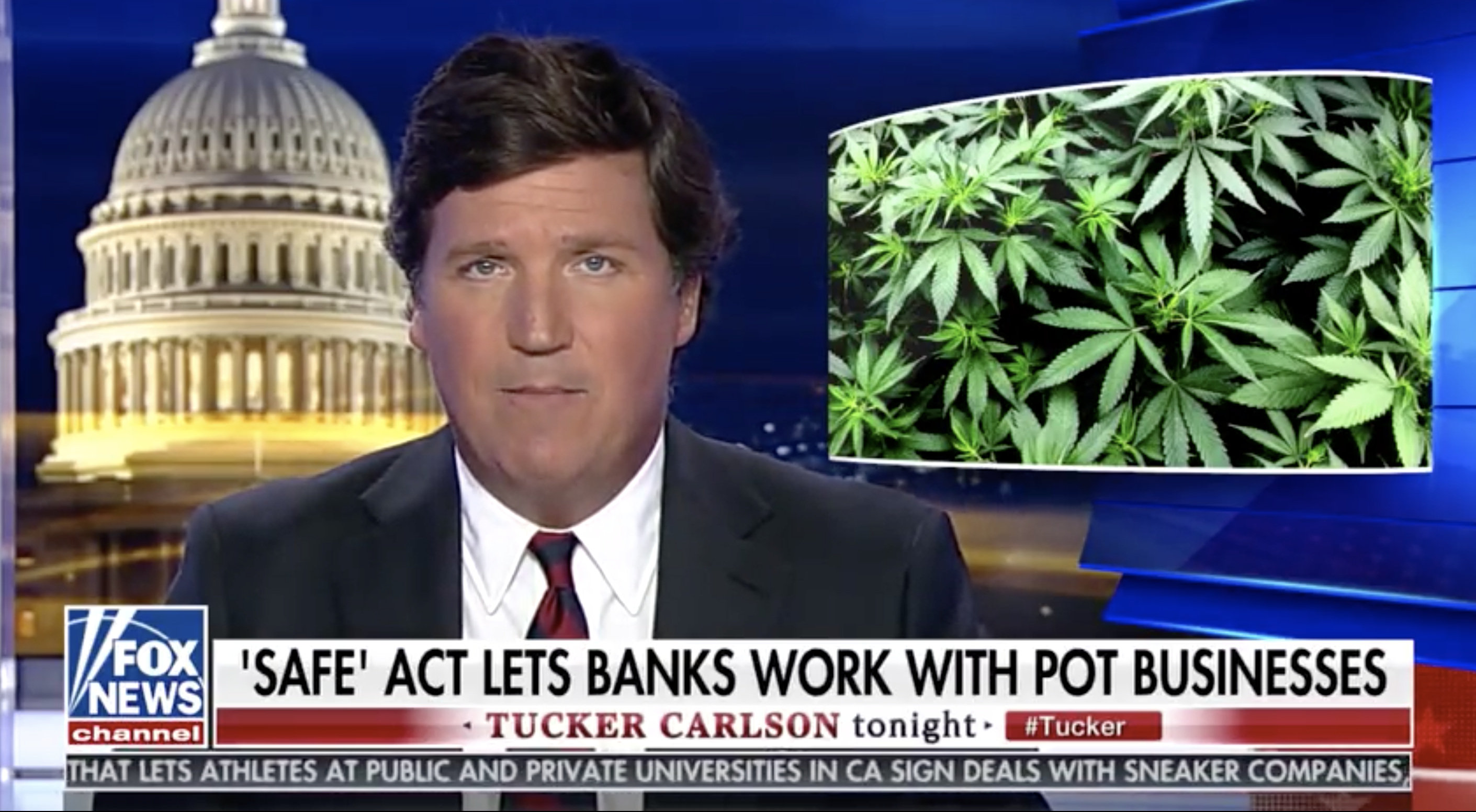 Why did the House pass a bipartisan marijuana banking bill last month? According to Fox News host Tucker Carlson, it’s because the legislation would help “weed dealers” and because lawmakers “want you to be dumb” so they can avoid public scrutiny.

Carlson, who has made clear in recent years that he’s no fan of cannabis after previously embracing reform during a stint as a libertarian, dedicated part of his show on Monday to the Secure and Fair Enforcement (SAFE) Banking Act, which cleared the House in a 321-103 vote and saw almost half of Republicans join with virtually all Democrats in support of the bill. The legislation would protect banks that service state-legal marijuana businesses from being penalized by federal regulators.

But as far as Carlson is concerned, the proposal is a ploy to enrich certain individuals and make the American population apathetic to the overall shortcomings of Congress.

The host started the segment by complaining about inaction on issues such as infrastructure and immigration and said that while Congress “should be working on these things,” they remain preoccupied with impeachment proceedings and are too divided to tackle them in any case. There is one exception to the partisanship, though, he said.

“On most issues they’re divided, but we should correct and say on one issue they’re in virtual total agreement,” he said. “Last Wednesday, that was the same day the House was convulsed with the impeachment debate, 291 Democrats and 91 Republicans came together in a rare moment of bipartisan agreement to pass the so-called SAFE Banking Act.”

“Even though marijuana is still illegal federally, the bill would allow banks and credit unions to provide banking services to people who deal marijuana,” he said. “So in the middle of the deadliest drug epidemic in our history, the only thing Congress can agree on is it ought to be easier to sell drugs to Americans.”

Carlson has a couple theories about why there was bipartisan support for the banking legislation—and it has nothing to do with concerns about crime and the lack of transparency that are associated with forcing cannabis businesses to operate on a largely cash-only basis.

“One, a small number are getting very rich doing it. The former Republican Speaker is now a weed lobbyist,” he said, referencing John Boehner. “And for another, when you mismanage the country this badly, you want the people to be so out of it they don’t respond. That is really true. They want you to be dumb.”

“Choose sobriety so you can be awake enough to critique them and the crappy job they’re doing,” he said.

While Carlson’s point about the legislation primarily benefitting existing marijuana firms is also a point of contention among some pro-legalization advocacy groups, nothing in the legislation is aimed at promoting cannabis use. It’s a bill six years in the making that was endorsed by  50 state banking associations, the National Association of State Treasurers, the top financial regulators of 25 states, a majority of state attorneys general and bipartisan governors of 20 states, among others.

But Carlson isn’t alone is his objection to the House passage of the SAFE Banking Act. The Family Research Council (FRC) is similarly against the legislation and expressed frustration on Tuesday that “some conservatives out there” have “fallen for the libertarian lie that the government can do a better job regulating marijuana and protecting people if it’s legal.”

The #SAFEBankingAct would make it easier for marijuana companies to "open checking accounts and get business loans." Pot companies argue that it would make the entire market safer, since they tend to operate on a "cash-only basis" or pay sky-high fees to banks who work with them.

FRC President Tony Perkins wrote in a blog post that the SAFE Banking Act is “one of the more ridiculously named pieces of legislation in the Democratic House” and urged the group’s supporters to ask their senators not to take up the bill.

The research is clear: all that's happening in the states where pot is allowed are more arrests, more hospital visits, more suicides, more crime, more DUIs, more work-related problems.
Contact your senators and ask them to hold the line on the #SAFEBankingAct. pic.twitter.com/fYuh4aEtx3

Prohibitionist group Smart Approaches to Marijuana also opposed the legislation, suggesting that it’s a simply a red herring in the push to federally legalize marijuana.