The House of Representatives approved a bill last week to protect banks that service marijuana businesses. But remarkable as it was to see the first standalone piece of cannabis reform legislation clear the chamber, perhaps even more impressive was the extent to which it garnered bipartisan support.

Every single Democratic present on the floor except one (229 members) voted in favor of the Secure and Fair Enforcement (SAFE) Banking Act, sponsored by Rep. Ed Perlmutter (D-CO). And nearly half of all Republicans (91 members) joined them. While advocates anticipated that it would pass, the final tally, 321-103, exceeded many expectations. 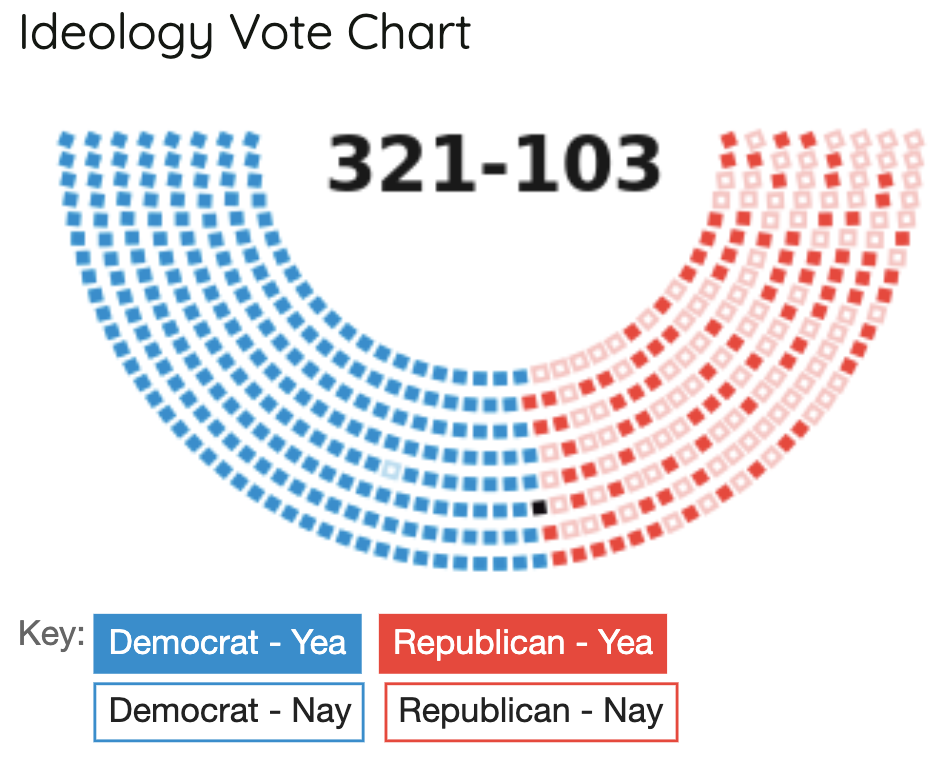 What changed since the last time Congress voted on cannabis banking?

This was a first-of-its kind vote on standalone marijuana legislation in the chamber. But a useful comparison comes from 2014, when the House voted on a similar but more limited appropriations amendment aimed at preventing the Treasury Department from penalizing banks that service cannabis businesses.

That measure passed 231-192 (though it was not enacted into law after the Senate declined to consider the provision). Among Democrats, 186 approved the earlier amendment, while 12 opposed it. About half as many Republicans voted for the 2014 amendment (45 members) than supported the SAFE Banking Act last week, while 180 voted against it.

In other words, Democratic support for a marijuana banking fix increased by 43 votes, or 21 percent, from 2014 to 2019. Republican support grew by 46 votes, or 68 percent, during that time period. 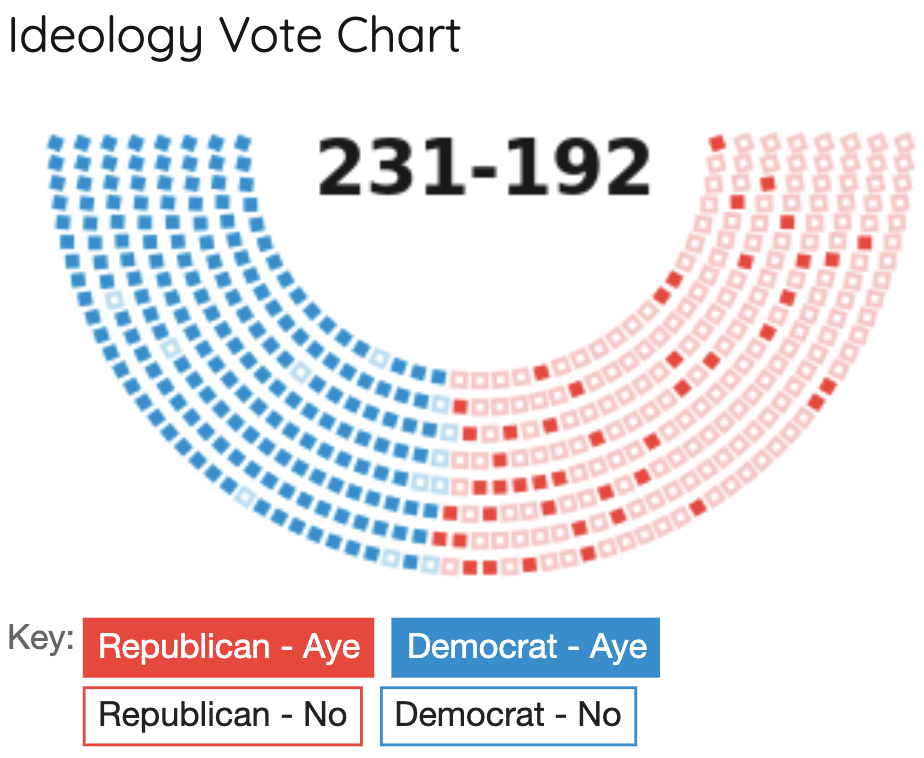 Among those present for both votes (235 members), here’s who flipped from “no” to “yes”:

All told, 44 members voted differently this year as compared to 2014, including 37 who flipped from “no” to “yes” and two who went in the other direction. Two lawmakers who previously voted “yes”—Reps. Elijah Cummings (D-MD) and Jim Clyburn (D-SC)—were absent for this latest vote. One former “no” vote, Rep. Rick Crawford (R-AR), was absent for this vote. And finally, two members who were absent in 2014 voted “no” this round, Reps. Scott DesJarlais (R-TN) and Bradley Byrne (R-AL).

While support for letting banks service marijuana businesses isn’t necessarily indicative of support for legalization itself, it’s clear that the bill would benefit legal states, and Republican votes in favor of the legislation were significantly higher among those representing such states. Of GOP members representing states with either full adult-use or comprehensive medical cannabis programs, 41 opposed the SAFE Banking Act.

(The following analysis doesn’t include those states allowing CBD only.) 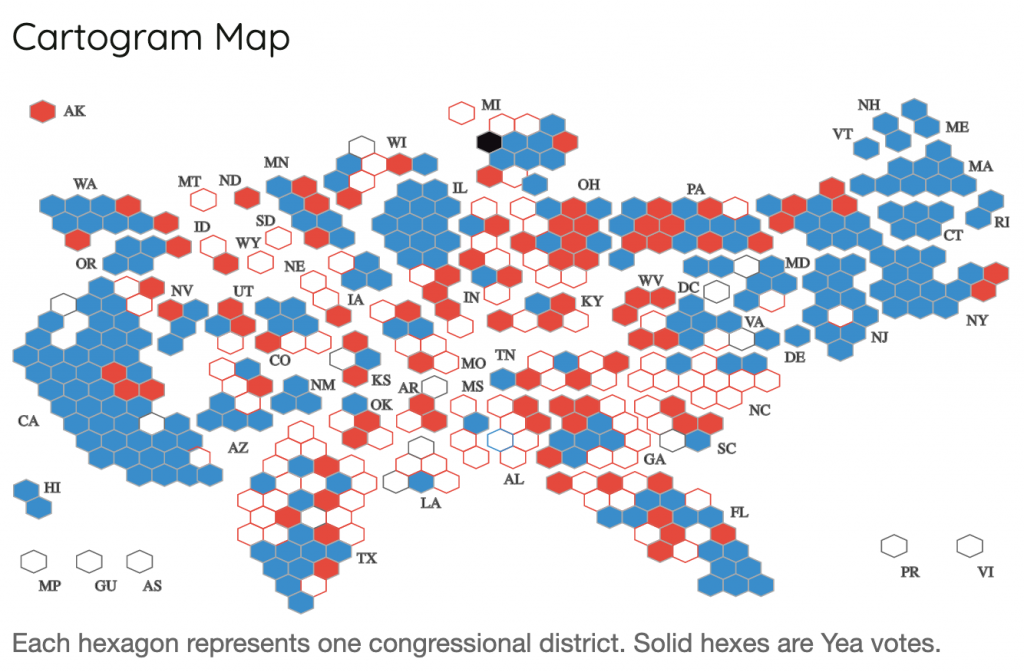 Though it’s not clear from this vote which members might be inclined to extend their support for modest marijuana banking reform to broader policy changes such as descheduling, those who voted “no” would in all likelihood not be supportive of comprehensive reform at this point.

It was easy to find the outlier among Democrats, as only one member defected and opposed the bill: Rep. Terri Sewell (D-AL), whose office did not respond to a request for comment about why the congresswoman voted against the legislation.

But there were also some notable votes in favor of the SAFE Banking Act that came from Republican leadership in the House.

The highest ranking Republican in the House, Minority Leader McCarthy, voted in favor of the bill, while the rest of the party’s leadership—Minority Whip Steve Scalise (R-LA), Republican Conference Chair Liz Cheney (R-WY) and Policy Committee Chair Gary Palmer (R-AL)—voted no. (McCarthy is the only one of the bunch representing a state with a legal cannabis market.)

Collins, ranking member of the Judiciary Committee, which plays a key role in shaping federal drug laws, changed his vote to “yes” after having been opposed to the 2014 amendment.

Stivers, an original cosponsor of the SAFE Banking Act who voted in favor of it on Wednesday, voted against the previous amendment with the narrower scope.

Barr of Kentucky flipped to a “yes” even after voting against the measure in the House Financial Services Committee earlier this year. It’s likely that a last-minute amendment clarifying that the banking protections also apply to hemp and CBD businesses was a factor in his decision.

Griffith, Perry and Roe each voted “yes” this round, possibly related to their more recent involvement in medical cannabis-related legislation.

Two Democrats who voted against the banking amendment in 2014 and who are now facing primary challenges from progressive opponents—Lipinski and Cuellar—opted to approve the SAFE Banking Act this time.

Finally, Wasserman Schultz, who has stood out among Democrats in her longstanding opposition to marijuana reform even as a former chair of the party, voted in favor of the bill on Wednesday.

Wednesday’s vote is the latest example of waning support for the status quo of prohibition in the most marijuana friendly Congress in history.

Though not a vote on ending federal prohibition, the banking legislation represented what many advocates regard as the first step toward legalization, and the result proved promising for the prospects of broader reform. It’s less clear how the bill will fare in the Republican-controlled Senate, which officially received the SAFE Banking Act from the House on Friday, but the largely bipartisan nature of the vote could help push it forward in the other chamber.

Senate Banking Committee Chairman Mike Crapo (R-ID), whose panel already held a hearing on the issue earlier this year, said he wants to have a vote on cannabis banking legislation by the end of the year—a notable evolution from his previous criticism of advancing such a reform while marijuana remains federally illegal.

“The fact that it got nearly 100 percent of Dems and pretty close to 50 percent of Republican demonstrates how mainstream cannabis reform has come,” Michael Liszewski, senior regulatory affairs counsel at 4Front Ventures, told Marijuana Moment. “Even [Reps. Henry Cuellar (D-TX) and Debbie Wasserman Schultz (D-FL)] couldn’t vote against. The fact that so many Republicans supported it shows that it can be successful in the Senate.”

“I won’t pretend to assume that we have a proportionate level of support for SAFE in the Senate, but even with a reasonable drop off, we can get to 60,” he said. “And now we can encourage all of the Republicans who voted in favor of SAFE to urge the senators from their states to cosponsor SAFE.”