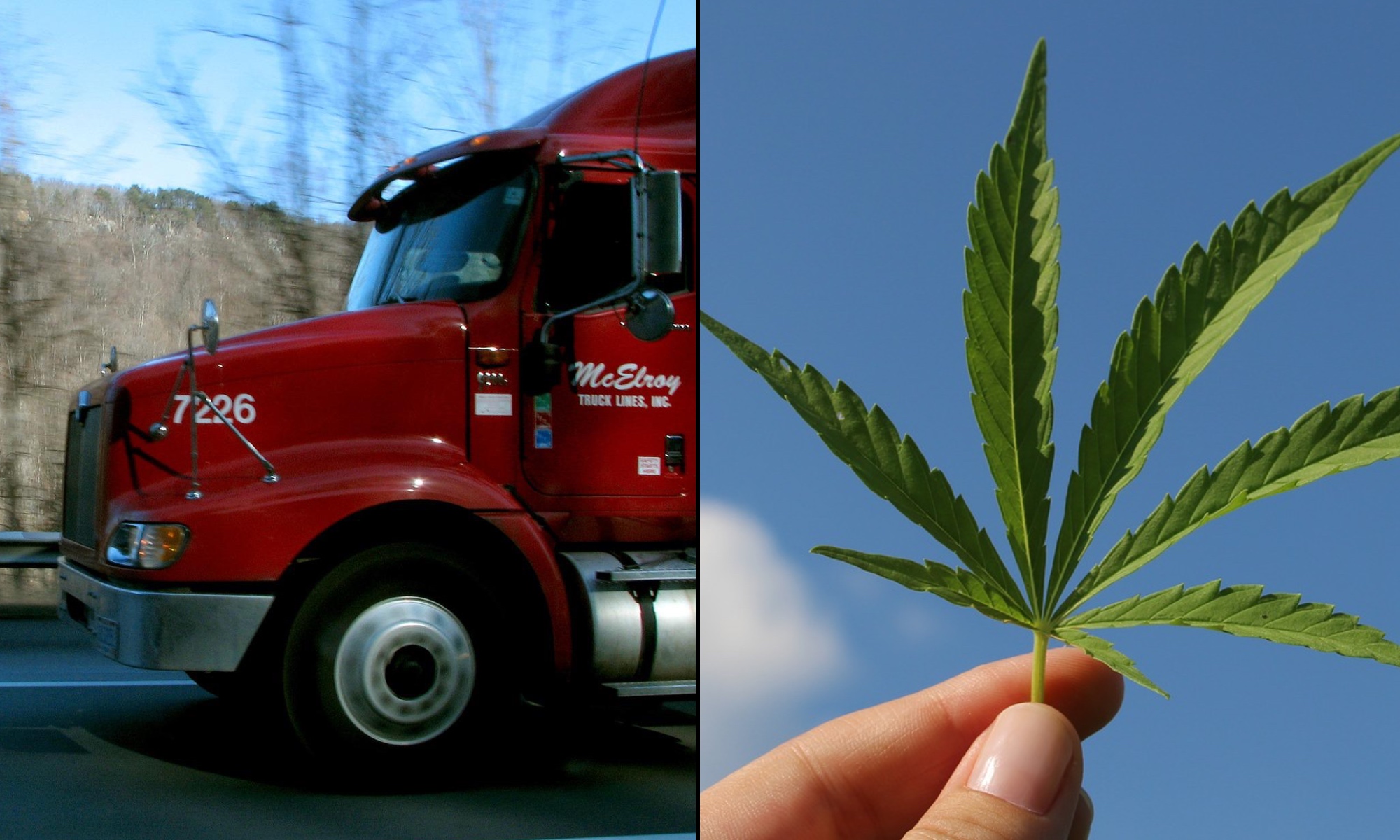 Commercial drivers who use CBD products are doing so “at their own risk,” a federal agency says in a draft handbook for medical examiners who are responsible for issuing U.S. Department of Transportation (DOT) certifications.

The proposed guidance, published in the Federal Register on Tuesday, is meant to advise medical examiners as they carry out physical exams for commercial drivers whose jobs require interstate travel.

While the Federal Motor Carrier Safety Administration (FMCSA) handbook says that drivers aren’t prohibited from using federally legal CBD products that contain up to 0.3 percent THC per dry weight, it cautions examiners that the use of the non-intoxicating cannabinoid could still jeopardize physical exam certifications.

Drivers who are required to submit to the exam and receive the DOT certification, which lasts for two years, “cannot be physically qualified” if they use marijuana, regardless of state law, the agency says—”even if marijuana is legal in the State where the driver resides for recreational, medicinal, or religious use.”

But hemp-derived CBD was legalized under the 2018 Farm Bill, prompting FMCSA to include the new cannabis section in the handbook.

The reason that the handbook warns medical examiners about drivers’ CBD use is because the Food and Drug Administration (FDA) does not regulate products that are widely available in commercial markets across the country.

“There is no Federal oversight to ensure that the labels on CBD products that claim to contain less than 0.3 percent by dry weight of THC are accurate,” the draft document says.

Testing positive for THC because of mislabeling isn’t a valid excuse, so drivers could still be deemed ineligible for certification if they take the wrong product.

“Therefore, drivers who use these products are doing so at their own risk,” the draft handbook, which is now open for public comment until September 30, says.

“CBD products containing less than 0.3 percent by dry weight of THC are not considered a Schedule I substance; therefore, their use by a CMV driver is not grounds to automatically preclude physical qualification of the driver,” it says. “However, each driver should be evaluated on a case-by-case basis.”

The proposed guidance on CBD would be included in the agency’s handbook seven years after it withdrew a prior version of the document that predated hemp’s legalization and therefore did not address cannabidiol products.

A 2021 draft version contained a more limited section on the cannabinoid and lack of FDA regulations—and a 2020 version didn’t discuss CBD, but it did make clear that marijuana use was off limits no matter the state law—but those versions were not finalized.

This latest proposed version also directs examiners to an earlier DOT notice stipulating that the department “requires testing for marijuana and not CBD” and providing other information about cannabis-related policy and compliance rules.

In a July newsletter from DOT’s Federal Transit Administration (FTA), the agency included two sections on cannabis issues: one that again reminded employees that they’re barred from using marijuana and another that similarly warned that CBD products remain unregulated and could contain THC levels that are detectable in a drug test.

In a letter sent to Transportation Secretary Pete Buttigieg in May, Rep. Earl Blumenauer (D-OR) argued that DOT’s overall cannabis testing policies are unnecessarily costing people their jobs and contributing to supply chain issues. He urged a review and administrative reform of the guidelines.

Buttigieg, who campaigned on a pro-legalization platform during his 2020 presidential bid and repeatedly condemned the harms of prohibition—going so far as to call for decriminalizing possession of all drugs—has yet to take any administrative steps to modernize DOT marijuana policy since taking the helm of the department.

While DOT will continue to test workers for THC, however, the department did also recently propose a revised drug testing policy.

Current department policy mandates urine testing, but the proposed rule change would allow saliva-based tests as alternate option. Depending on frequency of use, THC is generally detectable in saliva anywhere from one to 24 hours after use, rather than weeks for urine.

Further, the DOT proposal says there would be a “4 nanogram per milliliter screening test cutoff for THC,” which “would detect use of marijuana while eliminating possibilities of positive tests resulting from passive exposure.”

A top Wells Fargo analyst said in February that there’s one main reason for rising costs and worker shortages in the transportation sector: federal marijuana criminalization and resulting drug testing mandates that persist even as more states enact legalization.

Workplace drug testing issues continue to be raised, especially as more states move to legalize cannabis in some form and many industries are facing workforce shortages.

The nation’s largest union representing federal employees recently adopted a resolution in support of marijuana legalization and calling for an end to policies that penalize federal workers who use cannabis responsibly while they’re off the clock in states where it is legal.

Meanwhile, House Appropriations Committee leadership recently urged the White House to “continue to review policies and guidelines regarding hiring and firing of individuals who use marijuana in states where that individual’s private use of marijuana is not prohibited under the law of the State” as part of a Financial Services and General Government (FSGG) spending report.

It specifically requests that the executive branch apply drug testing standards with “consistency and fairness.”

In June, the Senate Intelligence Committee separately adopted an amendment from Sen. Ron Wyden (D-OR) that would prohibit the federal government from denying people the security clearances they need to work at intelligence agencies simply because they’ve used marijuana.

But in general, federal agencies have been reluctant to loosen cannabis-related employment rules despite state efforts to legalize cannabis for medical and recreational use.

For example, the Substance Abuse and Mental Health Services Administration (SAMHSA) recently proposed a changes to drug testing policies for federal workers that would clarify that having a doctor’s recommendation for medical marijuana or any other Schedule I drug is not a valid excuse for a positive drug test.

The director of national intelligence (DNI) said late last year that federal employers shouldn’t outright reject security clearance applicants over past use and should use discretion when it comes to those with cannabis investments in their stock portfolios.

FBI updated its hiring policies last year to make it so candidates are only automatically disqualified from joining the agency if they admit to having used marijuana within one year of applying. Previously, prospective employees of the agency could not have used cannabis within the past three years.

The Environment Protection Agency (EPA) also emphasized to its workers that they are prohibited from using marijuana—or directly investing in the industry—no matter the state law or changes in “social norms” around cannabis.

Then-White House Press Secretary Jen Psaki attempted to minimize the fallout, without much success, and her office released a statement last year stipulating that nobody was fired for “marijuana usage from years ago,” nor has anyone been terminated “due to casual or infrequent use during the prior 12 months.”

At the state level, Colorado Gov. Jared Polis (D) recently signed an executive order to provide broad professional licensing protections for workers who use marijuana in compliance with state law. The move also prevents state agencies from assisting in any out-of-state investigations related to lawful cannabis conduct that could result in employment penalties.

Last year, the state Department of Labor separately announced in guidance that New York employers are no longer allowed to drug test most workers for marijuana, with limited exceptions. Even prior to the enactment of legalization, New York City officials had established a local ban on pre-employment drug testing for cannabis.

In Missouri, the St. Louis County Council approved a bill in March to ban pre-employment and random drug testing for cannabis for most county workers.