States that have legalized marijuana for recreational use have seen sharp declines in youth treatment admission rates for the drug, according to a new federal report that also shows teen admission rates for cannabis misuse fell nationwide by nearly half during the 2008-2017 period.

Medical cannabis laws, meanwhile, appear to have no connection to teen treatment rates, according to the peer-reviewed research published on Thursday by the U.S. Centers for Disease Control and Prevention.

The data seem to refute warnings by legalization critics who predicted that ending prohibition would lead to ballooning rates of youth substance misuse.

“Consistent with prior research on medical marijuana and adolescent marijuana use, medical legalization status does not appear to correspond to treatment admission trends,” says study, published in the CDC journal GIS Reports. “Notably, however, 7 of 8 states with recreational legalization during the study period fall into the class with the steepest level of admissions decline.” 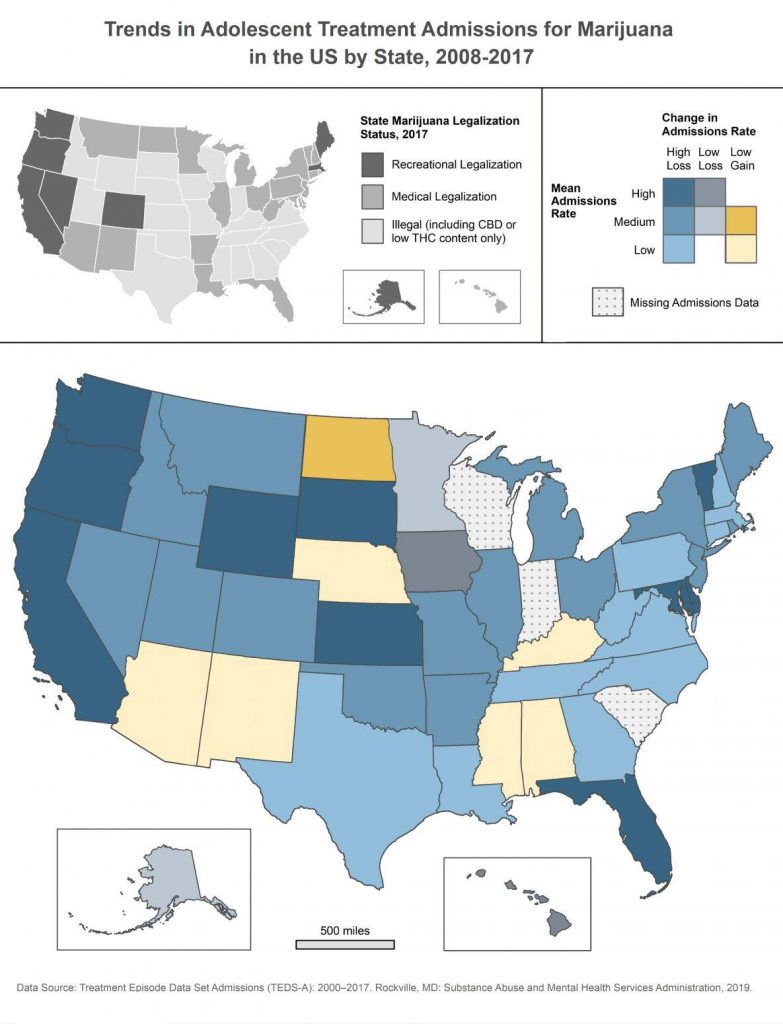 Via Jeremy Mennis / U.S. Centers for Disease Control and Prevention.

Author Jeremy Mennis, a professor at Temple University, assembled the report by collecting state-level data on teen treatment admissions where the primary substance used was marijuana. Dividing the annual admissions numbers by the number of adolescents in each state, obtained through U.S. Census data, allowed him to determine each state’s admission rate over time.

Mennis then displayed the state-by-state data on a map, taking into account both the state admissions rates themselves and the direction each was trending over time.

“All 12 states in the high mean admissions rate class sustained admissions declines,” the report says, “with 10 of those states having declines in the steepest category (states colored darkest blue).”

Some states—Wisconsin, Indiana and South Carolina—had too much missing data to include in the report.

What’s behind the trends isn’t immediately clear from the data. Mennis writes that possible causes for the declines, as well for the variation between states, “include changes in attitudes toward marijuana, as well as differences in marijuana use and incidence of CUD [cannabis use disorder], as well as in socioeconomic status, treatment availability, and health insurance.”

“Whatever the causes of the observed patterns,” the report says, “this research suggests that a precipitious national decline in adolescent treatment admissions, particularly in states legalizing recreational marijuana use, is occurring simultaneously within a period of increased permissiveness, decreasing perception of harm, and increasing adult use.”

The findings generally align with past studies looking at teen marijuana use in legal states, which have found that youth consumption has remained steady or fallen even as the perception of harm caused by marijuana has decreased.

In a presentation to lawmakers in North Dakota this summer, the deputy coordinator for the federal High Intensity Drug Trafficking Area (HIDTA) program’s National Marijuana Initiative, Dale Quigley, acknowledged that teen use was falling both nationally and in legal states.

“For some reason, the use rate among this age bracket is going down,” said Quigley, who lives in Colorado. “We’re not 100 percent sure why it’s going down. It’s a good thing that it’s going down, but we don’t understand why.”

Another study, released by Colorado officials in August, showed that youth cannabis consumption in the state “has not significantly changed since legalization” in 2012.

A CDC report published the same month, meanwhile, found that cannabis use by high school students has fallen in recent years after an earlier increase. Youth lifetime marijuana use “increased during 2009–2013 and then decreased during 2013–2019,” the report found.

“We are reassured by the latest results from the 2019 Youth Risk Behavior Survey because they show that youth marijuana use has not increased over the past decade, even as more states across the country have passed progressive marijuana laws,” Sheila Vakharia, deputy director of the department of research and academic engagement for the Drug Policy Alliance, said in a statement at the time.

Earlier studies looking at teen use rates after legalization have found similar declines or a lack of evidence of an increase.

Last year, for example, a study took data from Washington State and determined that declines in youth cannabis consumption could be explained by replacing the illicit market with regulations or the “loss of novelty appeal among youths.”

Photo by Sharon McCutcheon on Unsplash

FDA Is Hosting A Conference On CBD, Sex And Gender This Week