The governor of Rhode Island on Thursday unveiled his budget proposal for the 2022 fiscal year, and it includes a plan to legalize marijuana in the state.

The move comes two days after legislative leaders introduced their own bill to tax and regulate cannabis sales. While there are a number of differences, the lawmakers and administrative officials signaled that they intend to work together as they move through the process.

Gov. Dan McKee’s (D) proposal calls for 25 marijuana retailers to be licensed each year for the first three years of implementation. Those would be awarded on a lottery basis, but five would be specifically given to minority-owned businesses, a category that also includes firms run by women. Additional licenses would be issued in the future based on demand.

The plan calls for a “strictly regulated legal market for adult-use marijuana” that is “anchored in principles of equity and public health and safety,” an executive summary of the budget proposal says.

“Prohibiting the possession, cultivation, and sale of cannabis to adults has proven to be an ineffective policy for the State of Rhode Island,” the text of the legislation itself states. “In the absence of a legal, tightly regulated market, an illicit cannabis industry has thrived, undermining the public health, safety and welfare of Rhode Islanders. Regional and national shifts in cannabis policy have increased access to legal cannabis and marijuana products for Rhode Islanders in other states, the sale of which benefits the residents of the providing state while providing no funds to the State of Rhode Island to address the public health, safety and welfare externalities that come with increased access to cannabis, including marijuana.”

Cannabis sales would be taxed at 17 percent, which includes the state’s seven percent sales tax and a special excise tax of 10 percent. An administration official said on Thursday that a wholesale tax would also be applied and they estimate it would amount to three percent. The governor also included a call to create a “weight-based excise tax on marijuana cultivation.” 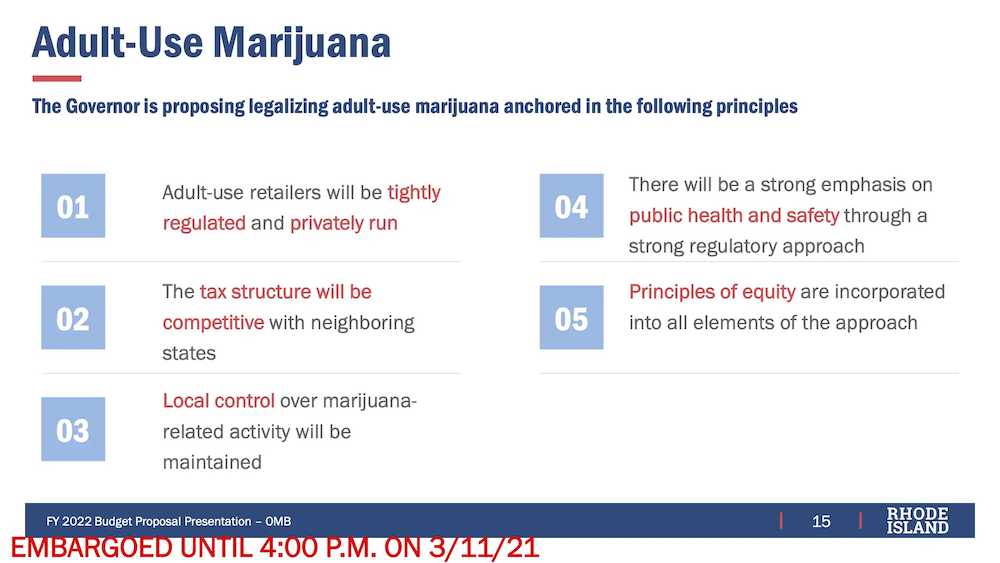 According to a fiscal analysis of the governor’s plan, the state stands to generate $1.7 million in marijuana tax revenue in the 2022 fiscal year, rising to $16.9 million in 2023.

Sixty percent of tax revenue would go to the state general fund, 25 percent would cover administrative costs—as well as “public health and public safety costs associated with adult-use marijuana”—and the remaining 15 percent would go to local governments. However, for the first year of implementation, 70 percent of revenue would fund the administrative and regulatory costs.

“This revenue supports various public health and safety needs, including a $1.1 million investment dedicated to substance abuse education in health equity zones, $0.5 million in funding for local police, and $0.3 million to help the state oversee prevention and treatment programs,” the executive summary says.

Part of that police funding would involve using cannabis tax dollars to finance three out of 28 people enrolled in the state’s trooper training academy.

Shaleen Title, a former commissioner with the Massachusetts Cannabis Control Commission who has championed the need to center equity in legalization plans, told Marijuana Moment that she noticed “there are very specific numbers for cops” when it comes to revenue allocation under McKee’s proposal, but when it comes to small businesses, there are simply recommendations. “Speaks for itself,” she said. 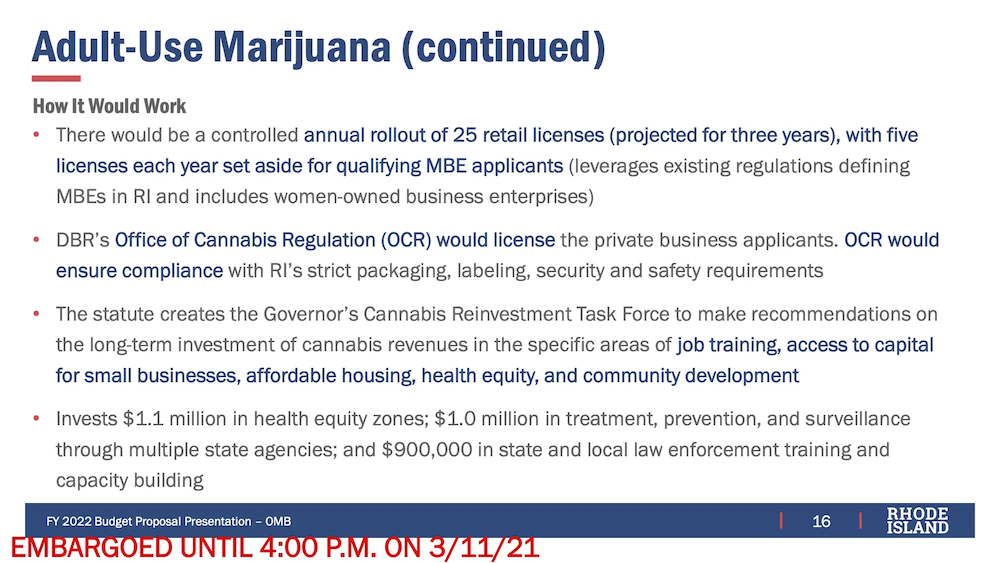 Unlike the lawmakers’ proposed legislation, McKee’s plan would not create a new independent commission to regulate the market. Instead, the state’s existing Department of Business Regulation (DBR) Office of Cannabis Regulation would hold that responsibility.

Both plans allow adults 21 and older to purchase and possess up to one ounce of marijuana. However, only the lawmakers’ bill provides a home grow option, with the governor’s stipulating a series of fines and penalties for personal cultivation of any number of plants.

In terms of social equity, the governor’s proposal would establish a “Cannabis Reinvestment Task Force,” tasked with studying and making recommendations on the most effective way to allocate tax revenue to support programs “in the specific areas of job training, access to capital for small businesses, affordable housing, health equity and community development.”

The competing Senate bill would similarly create an equity fund from license and application fees to provide “technical assistance and grants” to promote industry participation from “disproportionately impacted areas.” It does not contain provisions giving licensing priority to equity applicants, however.

Liz Tanner, director of DBR, said at a press conference that the governor’s office and her department are “reviewing the Senate proposal,” but she stressed that the senators “have clearly put a tremendous amount of thought and effort into their proposal, and we look forward to the opportunity to dialogue with them and the whole General Assembly, on their efforts.”

Both plans are notably different than the proposal that former Gov. Gina Raimondo (D) had included in her budget last year. Prior to leaving office to join the Biden administration as commerce secretary, she called for legalization through a state-run model.

“This is a market-based proposal—not the the state-run proposal proposed by the previous administration,” Jonathan Womer, director of the state Office of Management and Budget, said at the press briefing.

McKee gave initial insights into his perspective on the reform in January, saying that “it’s time that [legalization] happens” and that he’s “more leaning towards an entrepreneurial strategy there to let that roll that way.”

Late last year, the Senate Finance Committee began preliminary consideration of legalization in preparation for the 2021 session, with lawmakers generally accepting the reform as an inevitability. “I certainly do think we’ll act on the issue, whether it’s more private or more state,” Sen. Ryan Pearson (D) said at the time.

The growing momentum in Rhode Island also comes as lawmakers in neighboring Connecticut are also moving toward legalizing marijuana this year. Gov. Ned Lamont (D) included a cannabis legalization plan in his budget request last month, though advocates have been critical of several provisions, particularly as they concern social equity and home cultivation.

Meanwhile in Rhode Island, the Senate approved a bill last month that would allow safe consumption sites where people could use illicit drugs under medical supervision and receive resources to enter treatment. Harm reduction advocates say this would prevent overdose deaths and help de-stigmatize substance misuse.

Read the full text of the governor’s marijuana bill below: