As a signature drive kicks off in Washington State to qualify a drug decriminalization measure for November’s ballot, newly released opinion polling from advocates shows the proposal with a slight lead. But nearly 1 in 6 voters, the survey suggests, are still on the fence.

Initiative 1922, if passed, would remove Washington’s penalties for drug possession and direct more than $140 million annually in state funds toward expanded outreach, treatment and recovery services for people with substance use disorders. Similar to Oregon’s Measure 110, which voters there passed in 2020, it represents a shift away from the criminal drug war and toward a harm-reduction model.

Commit to Change WA, an ACLU of Washington–backed coalition of advocates and organizations, has already raised more than $1.5 million to support the would-be initiative, according to the state Public Disclosure Commission. To qualify the measure for November’s ballot, the group needs to gather at least 324,516 valid voter signatures by July 8. It recently posted job listings for staff at six offices across the state.

A post shared by Commit to Change WA (@commit2changewa)

In a call last week with reporters before the signature-gathering launch, I-1922 proponents said Washington voters broadly recognize that the state’s drug laws—which until last year classified most simple drug possession as a felony—have failed to address problem drug use while at the same time perpetuating discrimination and racism against Black, brown and Indigenous communities.

“If I can talk to a, you know, dyed-in-the-wool, old, Eastern Washington sheriff’s deputy, and they look at me and say, ‘Yeah, what we’re doing isn’t working,’ I know we’re ready to address this,” said Everett Maroon, a member of Commit to Change’s steering committee and the executive director of a Walla Walla healthcare nonprofit.

Dave Metz of California-based FM3 Research said the group had conducted about a dozen polls over the past few years to gauge how voters feel about drug reform and related issues, “and the data has been very consistent.”

“Washington voters are concerned about substance use disorder in the state, but they believe that the approach that we are currently taking, of criminalizing drug possession, has been a demonstrated failure,” Metz said. “They’re eager to embrace a new approach, one that takes a public health path toward addressing problematic drug use, and this initiative well embodies the values that Washington voters would like to see enacted.”

According to a survey from March of this year, 46 percent of respondents would “definitely” or “probably” vote for the initiative based on its ballot summary, while 37 percent would “definitely” or “probably” vote against it. Another 17 percent answered that they were undecided, with 6 percent leaning yes, 2 percent leaning no, and 9 percent entirely undecided.

Taking into account the leanings, the campaign described the initiative as having “slim majority support” of 53 percent as the signature-gathering drive launches. 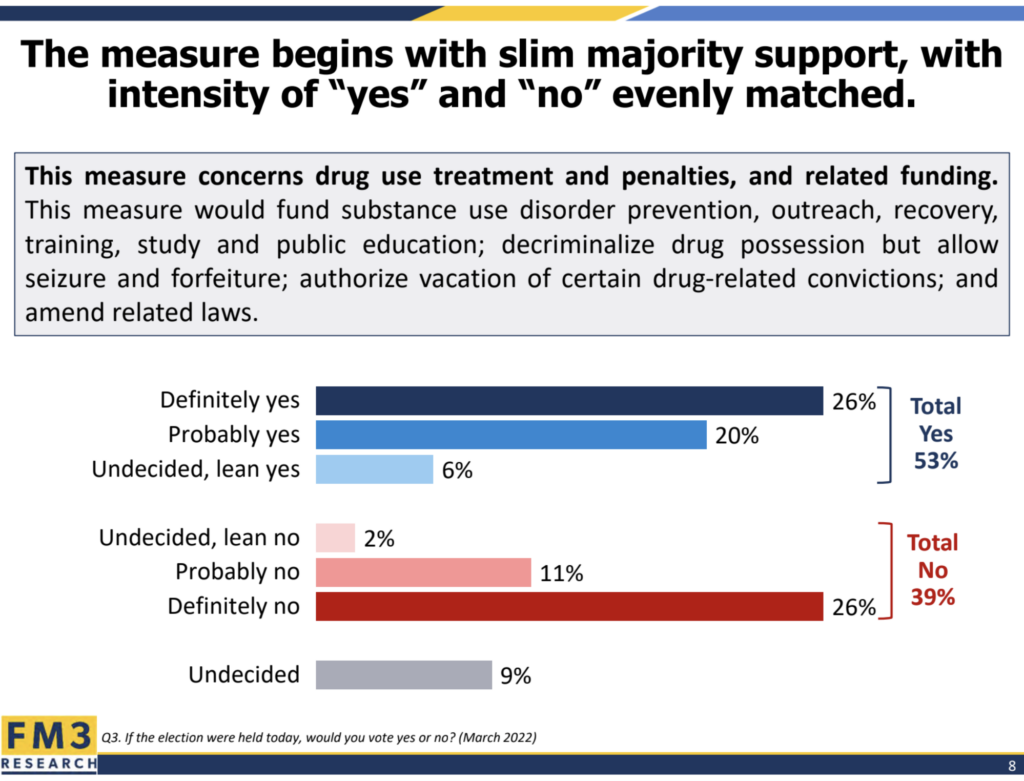 The description of the measure used in the survey is taken from the state attorney general’s ballot title for the initiative. Last month the title survived a legal challenge from an opponent who described drug use in the state as “out of control” and claimed the proposal would “legalize” drugs outright.

While the possession of drugs would not be subject to criminal penalties, police could still seize illegal substances they encounter, and most other drug-related offenses—including commercial sale and trafficking—would remain prohibited. Rather than charge people caught with drugs, law enforcement would refer them to treatment and other support services.

The proposal would also expunge past convictions for drug possession and use, removing blemishes from criminal records that can prevent people from finding jobs, securing housing and going to school.

In terms of treatment, I-1922 would route more than $141 million in new annual funding to services. Of that, $115 million would go to the state health care authority to pay for substance use disorder evaluations, prevention, outreach and engagement and recovery support. Another $10 million would pay for “harm reduction services, supplies, and staffing support at local harm reduction organizations.” Other spending would fund public education campaigns, testing drugs for law enforcement and members of the public, law enforcement training and the staffing of a state advisory committee.

Proponents have worked for years to draw attention to what they say is a need for the state to step up outreach and long-term recovery services to treat people with substance use disorders. While Washington funds treatment services better than many other states, they say, outreach and long-term recovery are lacking, meaning many people who need help are unaware of available resources or can’t find sustained support after leaving treatment programs.

Polling released by the campaign showed high concern among Washingtonians around areas such as homelessness, problem drug use and drug dependency, housing costs and drug overdoses. But other issues related to I-1922—including high arrest and incarceration rates as well as police violence against low-income people and people of color—were comparatively low. 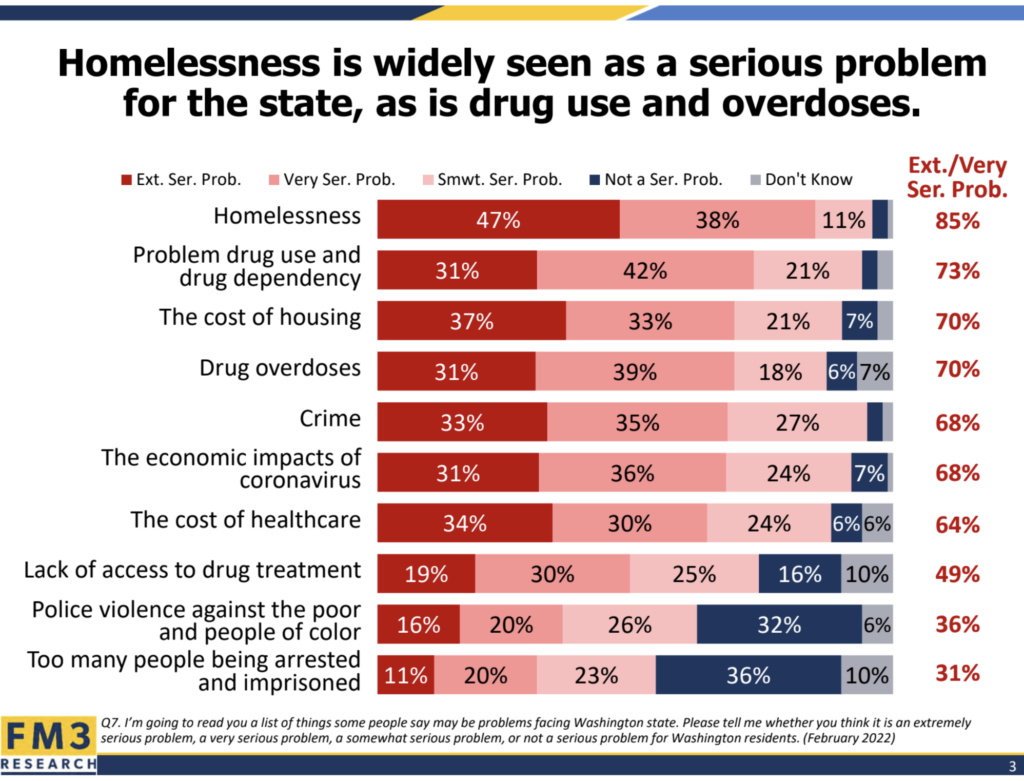 The poll also found that 71 percent of respondents believe that “the best way to address drug use is through engagement, healthcare, treatment and recovery services addressing the root causes of addiction,” with 23 percent saying that the best way to handle drug use is to “keep it a crime, letting police take drug addicts off the street.”

Carmen Pacheo-Jones, a Commit to Change steering committee member and founder and executive director of the Health and Justice Recovery Alliance, said on last week’s press call that she spent several years cycling in and out of incarceration before finally being connected with support services.

“At no point did anybody say, ‘Would you like to go to treatment?'” Pacheo-Jones said. “And when I finally did go to treatment, I was able to get clean, restore my relationship with my children, begin working and live a functional life.”

Nationally, support has been growing to end criminal penalties for drugs. A poll released last month by the progressive groups Data for Progress and the People’s Action Institute, for example, found that a strong majority of voters, including most Republicans, favor decriminalization. More people also support harm-reduction efforts, such access to naloxone—which can reverse opioid overdoses—and overdose-prevention sites, where people can more safely use drugs and be connected with treatment and other services meant to address the underlying causes of drug use.

In Oregon, Measure 110 has already more than halved total drug arrests and created more than $300 million in funding for services—including treatment, harm reduction, peer support and housing and employment assistance—of which at least $31.4 million had been paid to providers as of February. 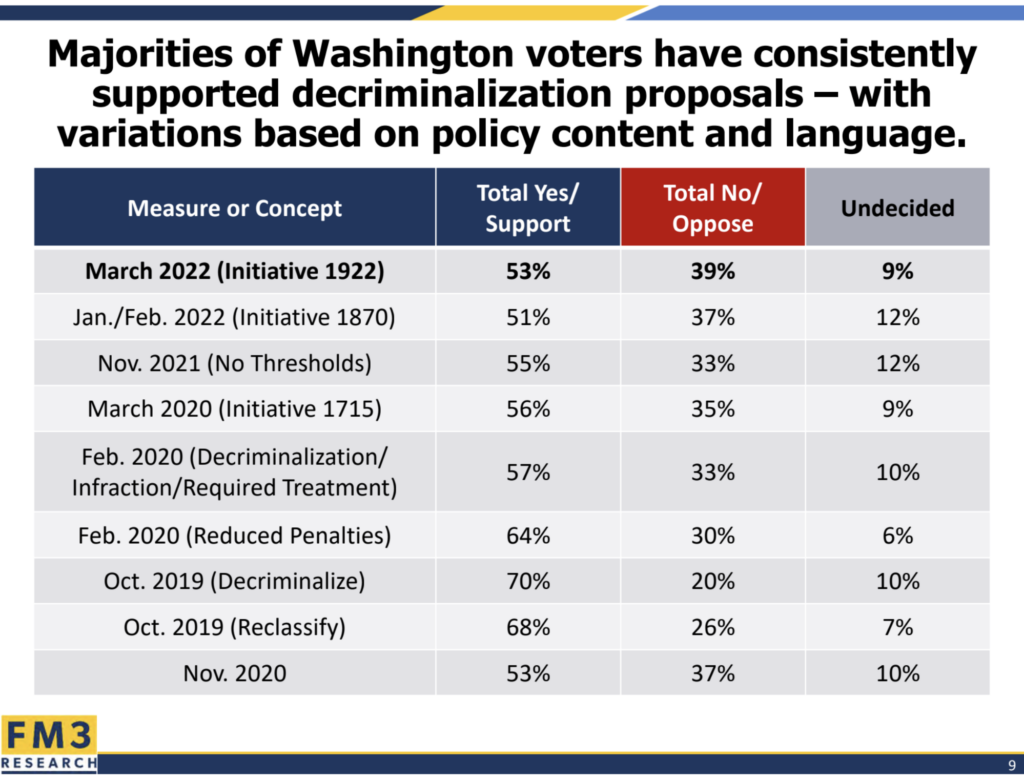 “It’s time to stop destroying the futures of our young people—especially Black and brown kids—over a small mistake,” Michelle Merriweather, president and CEO of the Urban League of Metropolitan Seattle, said in a press release. “Initiative 1922 will not only provide treatment and recovery services for those who need them most but also reduce racial disparities within the criminal legal system and the lifelong consequences that come with an arrest.”

Commit to Change WA has tried repeatedly in recent years to shift Washington’s approach to drug use from a crime-control paradigm to a public-health model. In 2020, when it was known as Treatment First WA, the group attempted to qualify a separate decriminalization and treatment measure for that year’s state ballot. But the outbreak of COVID-19 interrupted the signature gathering effort and organizers shifted their focus to the legislature.

After months of delay, state lawmakers last session introduced House Bill 1499, which included many of the group’s suggestions. But the bill failed to advance out of committee before a legislative deadline.

Shortly thereafter, the state Supreme Court overturned Washington’s felony law against drug possession completely, sending lawmakers scrambling to replace the law with little time left in the legislative session. Ultimately they approved a modest reform, reducing the state’s felony charge for drug possession to a misdemeanor and earmarking more money for treatment. But the law’s criminal penalties will expire in 2023, an effort to encourage lawmakers to revisit the policy.

The law, which took effect last May, was widely seen by advocates as a half-step toward meaningful reform. Many called on lawmakers to further invest in outreach and recovery and urged further dismantling of the criminal drug war.

Washington State lawmakers also briefly considered a bill this session that would have legalized what the legislation called “supported psilocybin experiences” for adults 21 and older. That proposal, however, failed to pass out of committee by a deadline earlier this month.

A separate prospective ballot measure aimed at qualifying for November’s ballot would legalize psilocybin, the main active component of psychedelic mushrooms, for use by adults 21 and over in settings with trained facilitators. That proposal, Initiative 1886, is backed by a different group, the political action committee ADAPT-WA, and is similar to the legislation introduced earlier this year. That ballot drive has raised far less financial support than the decrim proposal, however—about $10,000, according to state records.