A strong majority of Americans, including most Republicans, support drug decriminalization, according to a new national poll released on Friday. There’s also majority support overall for allowing the operation of overdose prevention centers where people can use illicit substances in a medically supervised setting and receive treatment resources.

The survey from Data For Progress and the People’s Action Institute asked a wide range of questions about harm reduction proposals, finding that likely voters broadly support bold policy changes to address the overdose crisis.

Seven in ten Americans said that they’re in favor of ending the criminalization of low-level drug possession and replacing the threat of prosecution with choice of paying a fine or being screened for treatment, compared to 25 percent who oppose the reform.

Support for the proposal increased by 10 percentage points overall since voters were asked about it last year with a different question in a prior Data for Progress poll. And this round, a majority of Republican voters (54 percent) said they strongly or somewhat support decriminalization, compared to 42 percent last year.

Democrats and independents now back the policy change at higher levels, at 82 and 75 percent, respectively. 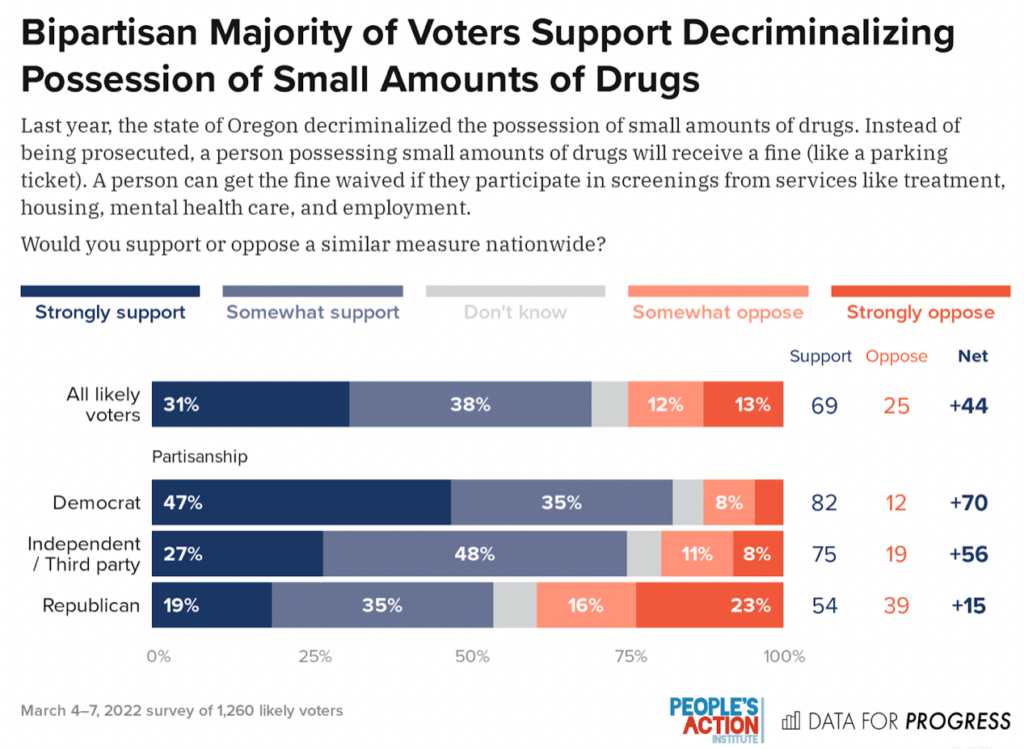 Here’s the exact language of the new decriminalization question:

“Last year, the state of Oregon decriminalized the possession of small amounts of drugs. Instead of being prosecuted, a person possessing small amounts of drugs will receive a fine (like a parking ticket). A person can get the fine waived if they participate in screenings from services like treatment, housing, mental health care, and employment. Would you support or oppose a similar measure nationwide?”

The prior survey from the organization provided far fewer specifics about the policy—simply asking, “Would you support or oppose decriminalizing the possession of small amounts of controlled substances?”—which may explain the increase in support from voters who were prompted with more details of the reform this time.

NEW POLL with @PplsActionInst: By a +64-point margin, voters support expanding the use of medication-assisted treatments for substance use and addiction treatment. Support includes Independents by a +62-point margin and Republicans by a +52-point margin. https://t.co/Cw7xag0TiQ

That latter finding is especially notable considering that the service is not widely available and has historically been viewed as controversial. The first such facilities in the U.S. opened in New York City late last year, and there’s also ongoing litigation about the federal legality of the service after the Trump administration sued a Philadelphia-based nonprofit that sought to open its own site.

Advocates have celebrated the early results of the New York City facilities, finding evidence that they save lives.

A majority of Democrats (81 percent) and independents (62 percent) are in favor of the harm reduction centers, and a plurality of Republicans (49 percent) support them as well. 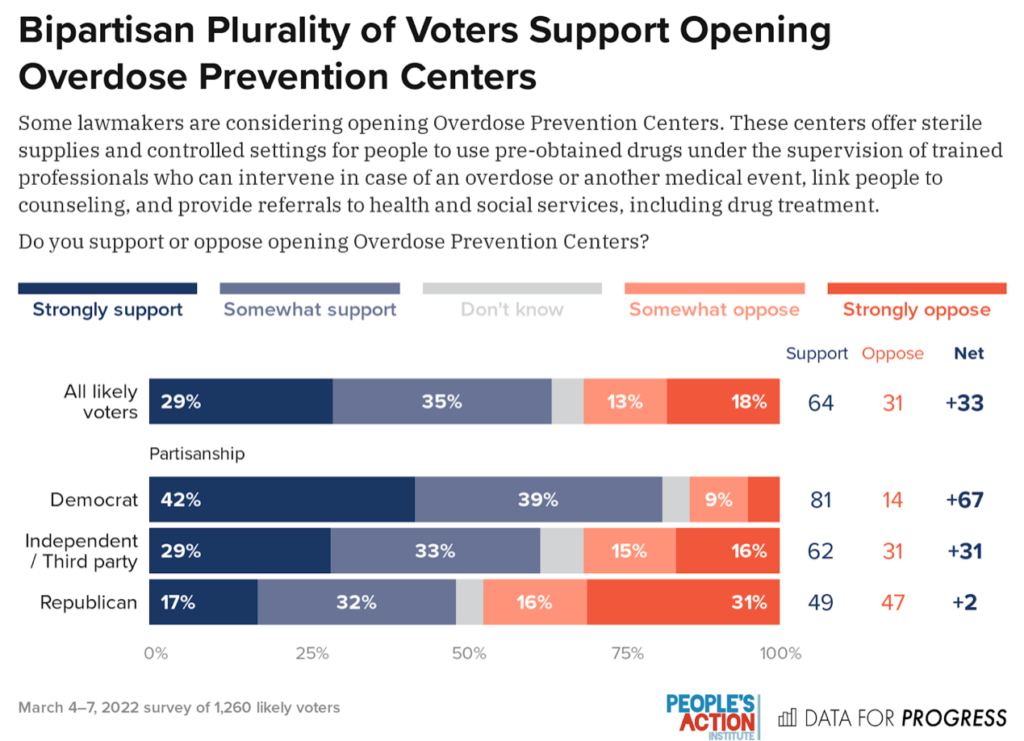 Here’s the language of the safe consumption site question:

“Some lawmakers are considering opening Overdose Prevention Centers. These centers offer sterile supplies and controlled settings for people to use pre-obtained drugs under the supervision of trained professionals who can intervene in case of an overdose or another medical event, link people to counseling, and provide referrals to health and social services, including drug treatment. Do you support or oppose opening Overdose Prevention Centers?”

Today @PplsActionInst and @DataProgress released polling showing that people of every race and place have been touched by the overdose crisis, and a majority of people across party lines support evidence-based harm reduction measures to end it. https://t.co/CubqoKKbNI

Overall familiarity with harm reduction proposals is relatively low, but the results signal that explaining what they would achieve generally lends to support for reform. The poll also shows that nearly two in five Americans know someone who’s struggled with addiction or experienced an overdose.

The survey involved interviews with 1,260 likely voters from March 4-7, with a margin of error of +/-3 percentage points.

When it comes to decriminalization, the policy proposal was considered in a number of states like Maryland and Rhode Island this session.