To date, over 16,000 Oregon residents have already accessed services funded by Measure 110.

According to information shared with Filter by the Drug Policy Alliance, there were 60 percent fewer total drug arrests in state over the 10 months after February 1, 2021, compared with the same period the previous year. That 2020 period saw 9,100 drug arrests in total—meaning a reduction of almost 5,500 arrests. However, the data do not yet show the extent to which this decline was attributable to Measure 110.

Here is what happened over the year as told by @MyHarmReduction.

Measure 110 also requires that a portion of cannabis tax revenue be put into a special fund to expand services for people who use drugs. Before the measure passed, Oregon ranked near the bottom of all U.S. states for access to substance use disorder (SUD) treatment.

Thanks to the measure, the state has already paid out over $31.4 million to providers of services including treatment, harm reduction, peer support, and housing and employment support. Gov. Kate Brown (D) had initially wanted to delay payments until July 2022, but advocates told Filter that they successfully fought to get this money paid out early, helping to keep critical services running.

To date, over 16,000 Oregon residents have accessed services funded by Measure 110. 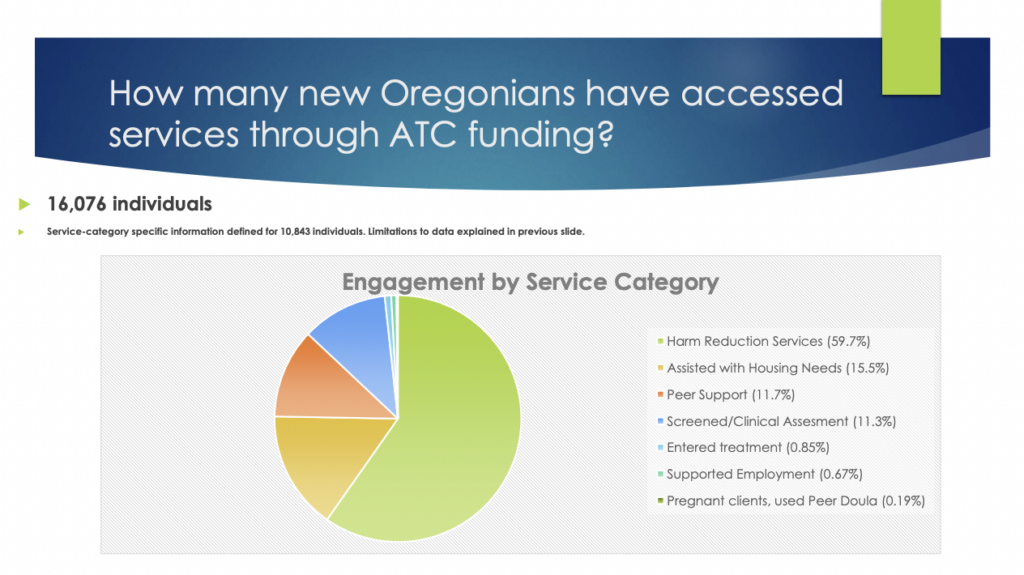 In the meantime, the state has received, and has been reviewing, funding requests from providers all over Oregon. From mid-February, the state will be paying out another estimated $302 million to help every county create a “behavioral health resource network.” This should entail a coordinated, one-stop system where each county’s service providers will work together to make it as easy as possible for people to get the care they need.

“A person could call one of the numbers, they could get hold of a ‘[service] navigator,’” Monta Knudson, CEO of Oregon treatment and housing provider Bridges to Change, told Filter of this system. “That navigator could send a peer recovery mentor to pick them up, to get them to an assessment site and figure out what it is they’re asking for and what they need, and they do all the background work.”

Establishing these systems will be the focus of much work in 2022. But to date, over 16,000 Oregon residents have already accessed services funded by Measure 110.

“We hired a full-time harm reduction specialist … it really transformed what we were able to do.”

Julia Pinsky, executive director of Max’s Mission, told Filter how her harm reduction program in southern Oregon has benefited from this funding.

“It allowed us to consistently serve people in three counties, to expand syringe exchange services, distribute a lot more naloxone, expand our opioid overdose [kits],” she said. “We hired a full-time harm reduction specialist, we have a peer support specialist, somebody else who helps with data and outreach … it really transformed what we were able to do.”

On the other hand, less than 1 percent of the people who accessed SUD treatment in Oregon during the 10-month period did so with Measure 110 funding. A reason for this, explained Tera Hurst, executive director of the Health Justice Recovery Alliance, is that Measure 110 is supporting many other services besides SUD treatment.

Medicaid already helped cover services like residential and out-patient programs, and medications like buprenorphine and methadone. But treatment providers have not had nearly enough capacity to meet everyone’s needs. Measure 110 is supposed to give them the money to expand. But it’s also funding many things Medicaid never fully covered and still doesn’t.

“It’s paying for the broader continuum of treatment needs, but not necessarily something that would be billable by Medicaid or insurance,” Hurst told Filter. “This is meant to be investing in services that haven’t been invested in before, and it will cover treatment costs if someone is ineligible for Medicaid or a health plan.”

Housing is another particularly important need that Measure 110 is helping to address. “Not everyone’s going to get into residential treatment and not everyone needs residential treatment,” Hurst said. “Some people actually have better outcomes if you’re able to house them in their community and offer these ‘wraparound’ services.”

If passed, the bill would divert $15 million from the SUD treatment fund each quarter, redirecting it to Oregon State Police.

Hurst acknowledged Oregon’s huge task of setting up the behavioral health resource network in 2022. But advocates like her are also on the defensive—already, state lawmakers are making plans to take money allocated for expanding services and spend it instead on more police.

Sen. Tim Knopp (R) is sponsoring Senate Bill 1541, as an attempt to give law enforcement more money to combat illicit cannabis cultivation in the state. If passed, Hurst explained, the bill would divert $15 million from the SUD treatment fund each quarter, redirecting it to Oregon State Police. It wouldn’t be the first time cannabis tax money has been used in this way.

Challenges and battles remain, therefore. But thousands of people in Oregon, whether receiving services or avoiding arrest, have already felt benefits from Measure 110. And with major funding soon to be rolled out, many more positive impacts are expected in 2022.

Older D.C. Patients Could Get Medical Marijuana Without Doctors And City Would Have 4/20 Cannabis Tax Holiday Under Council Bill