The federal government would save money if a bipartisan bill to give marijuana businesses access to banks is approved, according to a report released by the Congressional Budget Office (CBO) on Friday.

The legislation, which cleared the House Financial Services Committee in a bipartisan vote of 45 to 15 in March, would change federal law to protect financial institutions that service the cannabis industry from being penalized by regulators. That reform would set off a chain of events, beginning with a likely increase in the number of banks accepting deposits from those businesses, CBO reasoned.

Assuming the bill takes effect near the end of the 2019 fiscal year, the office estimates that starting in 2022, banks would see a $1.2 billion increase in deposits, and credit union deposits would grow by $200 million. By 2029, the amounts “would rise to $2.1 billion and $350 million, respectively.”

Because those deposits would have to be insured through the Federal Deposit Insurance Corporation (FDIC) and the National Credit Union Administration (NCUA), the CBO took into account the possibility that individual financial institutions will fail, and the estimated cost of resolving those failures is $5 million.

That said, those direct spending costs would be “offset by assessments levied on insured financial institutions,” which would amount to about $9 million.

Rep. Ed Perlmutter (D-CO), the bill’s chief sponsor, told Marijuana Moment that its enactment would have benefits beyond fiscal savings.

“Getting cash off our streets and making our communities safer will come at no cost to the federal government and actually save money while providing a much-needed long-term banking solution for legitimate marijuana businesses across the country,” he said. 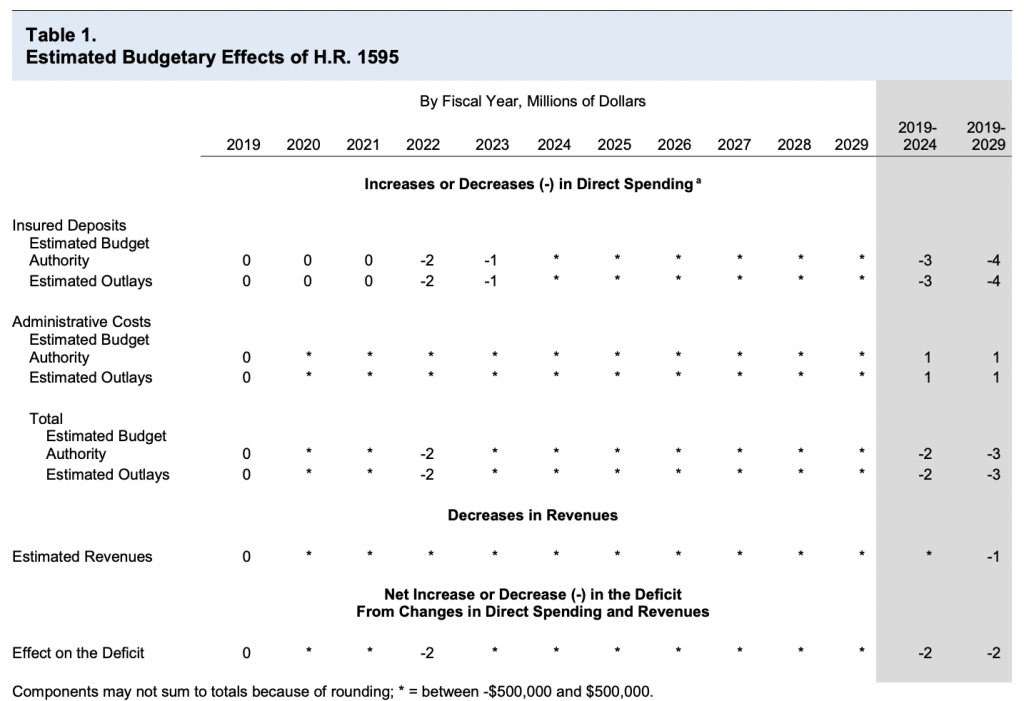 “This CBO score should only increase the significant momentum in Congress behind passing the SAFE Banking Act,” Neal Levine, CEO of the Cannabis Trade Federation, told Marijuana Moment. “It is now apparent that we can help diminish a serious threat to public safety at no net cost to the federal government. We look forward to the bill passing through the House and hope the Senate will follow suit.”

There are some implementation costs to take into account, CBO says. The administrative costs are estimated to be $3 million. But the FDIC and NCUA are able to charge premiums on the financial institutions they regulate to cover much of those costs. The total net administrative costs would, therefore, be about $1 million.

The Federal Reserve would also have to spend funds to implement the bill, and that would reduce remittances to the Treasury Department. Those remittances are considered revenue, which is expected to decrease by about $1 million if the legislation is implemented.

Then there are costs related to other provisions of the bill. Financial regulators would have to update and issue new guidance, which would “cost less than $500,000 over the 2019-2024 period.”

The legislation also requires the Government Accountability Office to study barriers to entry in the marijuana industry and to financial services for minority- and women-owned cannabis businesses. The costs are estimated to be less than $500,000 annually from 2020 to 2024.

The CBO also estimated that enacting the legislation “would not increase on-budget deficits by more than $5 billion in any of the four consecutive 10-year periods beginning in 2030.”

The CBO outlined “several noteworthy areas of uncertainty” that could change the calculus.

1. New guidance from federal financial regulators could be more or less stringent than existing guidance implemented under the Obama administration, which could impact the amount of deposits banks and credit unions will receive.

2. Data on cannabis-related deposits is currently “limited,” as federal restrictions have forced marijuana businesses to operate on a largely cash basis. That means CBO’s estimates on the amount of deposits financial institutions will see could end up being “greater or smaller.”

3. If those estimates do end up being different, costs associated with the bank and credit union insurance funds “could be higher or lower depending on the amount of premium collections and capital deposits and on changes in the resolution costs for financial institutions.”

Sahar Ayinehsazian, an associate attorney at Vicente Sederberg LLP who specializes in cannabis banking, told Marijuana Moment that most of the figures lined up with her expectations. However, given that many marijuana businesses have gravitated toward credit unions rather than banks, she said the estimate increase in deposits to those financial institutions may well end up being larger.

“Looking at the chances of this legislation passing from an economic standpoint, I think [the CBO score is] good news,” she said.

Other advocates agreed that the CBO estimate should help efforts to advance the bill.

“For years, cannabis advocates have been preaching the net benefits SAFE Banking would have on consumers, patients, financial institutions, regulators and taxpayers. This CBO cost estimate confirms that,” Michael Correia, director of government relations for the National Cannabis Industry Association, told Marijuana Moment. “The increase of insured deposits, coming from the added certainty this legislation brings, far outweighs the minor administrative costs to implement this bill.”

The House marijuana banking bill currently has 184 cosponsors, and a companion Senate version has 30 lawmakers signed on. The committee of jurisdiction in the upper chamber has not yet set a hearing or a vote, but pressure is increasing.

Banking associations from all 50 states urged the Senate to take up the legislation earlier this week. Other organizations that have called for a resolution to the cannabis banking dilemma include the National Association of Attorneys General, which has endorsed the bill, and the National Association of State Treasurers, representing state treasurers and finance officials, which adopted a resolution last week in favor of the legislation’s passage.

Want 4 million more reasons why members of Congress should support the #SAFEBankingAct, which would allow cannabis businesses to access the banking system in the 33 states where it’s legal? ⁦@USCBO⁩ says the legislation will save taxpayers $4M over 10 years.

The new analysis is just the third time that the CBO, which is mandated to score bills that pass full committees, has issued a report on the economic impact of standalone cannabis legislation. The agency scored two marijuana research bills that cleared committees last year.

This story was updated to include comment from Perlmutter and Correia.