While there were still 2,576 Drug Enforcement Administration (DEA) marijuana arrests in fiscal year 2020, cannabis busts have dropped an average of 11 percent each year since 2010, when DEA made 8,215 such arrests.

There are likely several factors at play, including, most recently, the role of the coronavirus pandemic, which the Bureau of Justice Statistics said “drove an 81 percent decline in arrests and 77 percent decline in cases charged from March to April 2020.”

But advocates also say that the significant downward trend in cannabis prosecutions reflects discretionary decisions by DOJ amid the state-level legalization movement. While prior Obama-era guidance urging such discretion was rescinded under the Trump administration, the department has not signaled a renewed interest in going after individuals for simply possessing or using marijuana.

Drug-related cases accounted for 16 percent of all federal arrests in 2020, the new report says. Mosts of those arrests were for methamphetamine, powder cocaine and heroin. Marijuana busts have seen the steepest decline of all drug types covered in the report. 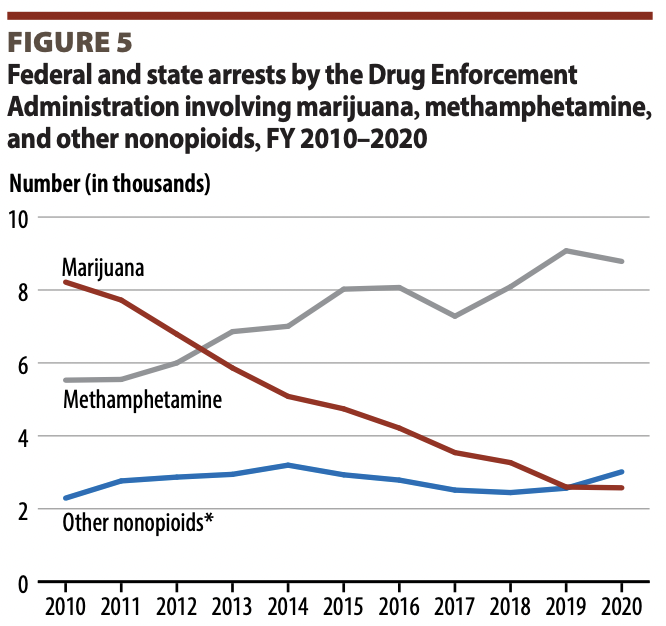 A separate analysis from the federal U.S. Sentencing Commission (USCC) that was released in March also found that federal prosecutions over marijuana dropped again in 2021, with fewer than 1,000 people charged in cannabis trafficking cases. In 2020, USCC documented 1,118 cannabis cases.

Federal prosecutions of drug-related crimes overall increased in 2019, but cases involving marijuana dropped by more than a quarter, according to an end-of-year report released by Supreme Court Chief Justice John Roberts that year.

Data from the FBI that was released in late 2020 showed that, for the first time in four years, cannabis arrests declined nationally.

While there might not be a single factor contributing to these trends, it seems likely to continue—both because more states are working to end prohibition and because the federal Justice Department is now being led by an attorney general who has repeatedly said that low-level marijuana enforcement is a waste of resources.

The House voted for the second time in history to approve a bill to federally legalize cannabis in April. And Senate leadership is actively finalizing a separate piece of reform legislation that they intend to introduced before the August recess.

Meanwhile, as DEA is making fewer marijuana arrests, it’s also taken steps to increase the number of authorized manufacturers to produce cannabis, and it’s also increased the quota for the cultivation of certain psychedelics like psilocybin for research purposes.

Also, the Justice Department recently urged the U.S. Supreme Court to reject a case concerning workers’ compensation for medical marijuana. And part of its reasoning is that it appears Congress is positioned to advance reform that would address the issue legislatively.