The president’s mass marijuana pardons and scheduling review directive are again being touted by the White House as “top accomplishments” for the Biden-Harris administration.

As the end of President Joe Biden’s second year in office approaches, the White House launched a webpage looking at “The Biden-Harris Record” that lists 17 major administration achievements, which includes “ending our failed approach to marijuana.”

“To help remedy our country’s failed approach to marijuana, including racial disparities, the President pardoned all prior federal offenses of simple marijuana possession and urged governors to do the same,” it says. 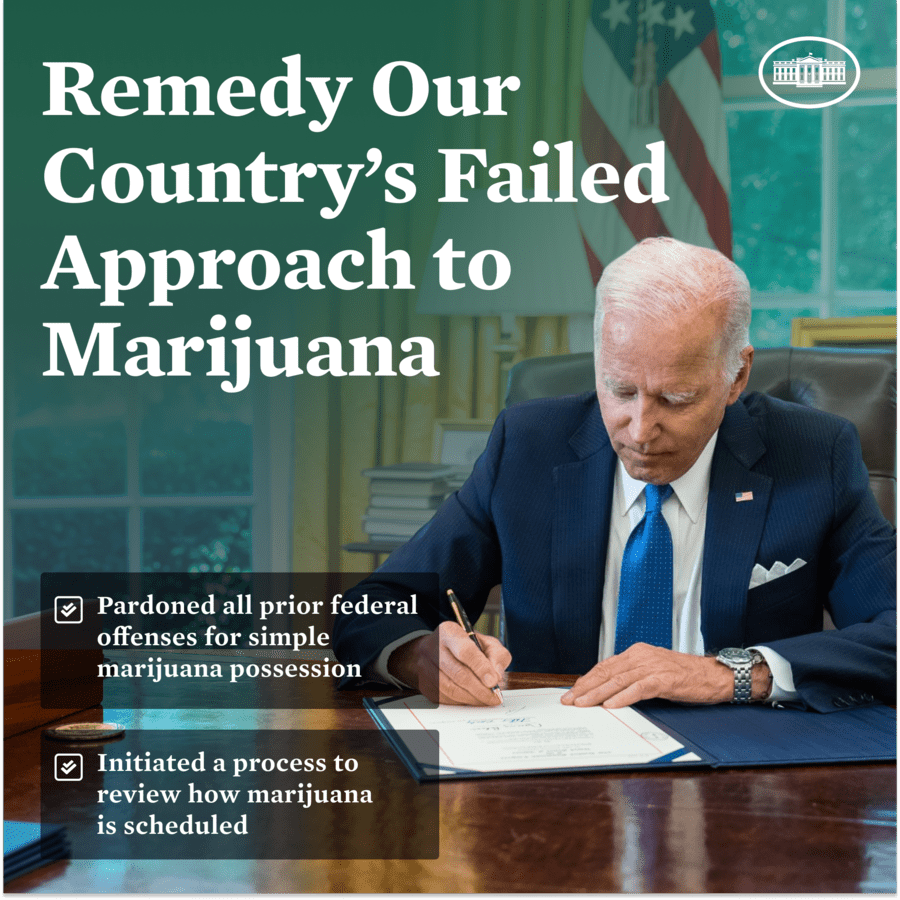 “The Administration is also initiating the process to review how marijuana is scheduled under federal law. Marijuana is currently a Schedule I drug, the same classification as for heroin and LSD and even higher than for fentanyl and methamphetamine,” it continues.

During the early part of the administration, the president and vice president were largely silent on cannabis policy issues after taking office, despite campaigning on a series of modest marijuana reforms like decriminalization and rescheduling. But since Biden granted the pardons last month, the administration has seized the popularity of the action, especially in the lead-up to the midterm elections last week.

Its inclusion on the list of “top accomplishments” is notable in the context of the other 16 achievements. For example, the marijuana relief is listed just after accomplishments on issues like student debt relief and reproductive and right before the administration’s efforts to provide support for Ukraine amid Russian military aggression.

– Signed the most significant expansion of benefits and services for toxic exposed veterans in more than 30 years
– Nominated Justice Ketanji Brown Jackson to the Supreme Court
– Pardoned all prior federal and D.C. offenses of simple marijuana possession

It’s also worth noting that the cannabis action was given its own separate category and not lumped in with another top accomplishment: “Advancing equity and racial justice, including historic criminal justice reform.”

While the issues are related—and the White House did recently link them in a statement about steps that have been taken to uplift Black Americans—the administration evidently wanted to put a particularly bright spotlight on the cannabis achievement in the new list, as well as in related posts on Twitter.

Multiple polls have shown that Biden’s marijuana clemency is widely supported by the public, but advocates and some lawmakers have made clear that they want to see the administration go further.

For example, nine congressional lawmakers sent a letter to Biden on Monday, imploring him to extend his pardons include immigrants who have citizenship status issues. They are also urged him to “prioritize” decriminalization or descheduling.

Rep. Alexandria Ocasio-Cortez (D-NY) previously called for an expansion of the president’s pardons, stressing the importance of having a Democratic Party that proactively stands up for Latino communities, including the immigrant population. Part of that means enacting inclusive policies, she said, which was a missing element of the president’s mass cannabis pardon.

Earlier this month, more than 130 immigrations and civil rights organizations sent a letter to Biden, similarly imploring him to extend his marijuana possession pardon proclamation to anyone regardless of immigration status.

Biden’s mass pardon impacted about 6,500 people who’ve committed marijuana possession offenses at the federal level, plus those who’ve violated the law in Washington, D.C., but activists have argued that the relief should also extend to people like immigrants and those with sales convictions.

Activists with Students for Sensible Drug Policy (SSDP), Last Prisoner Project (LPP) and DCMJ staged protests outside of the White House last month to call attention to that issue, demanding that Biden release the estimated 2,800 people currently in federal prison for marijuana convictions that aren’t limited to simple possession.

While Biden has repeatedly touted his cannabis clemency action, saying at one point that he’s “changed the lives of thousands of people,” he’s strongly indicated that he’s unwilling to provide further relief for those with sales convictions.

Meanwhile, the White House drug czar recently cheered Biden’s “historic” move to issue a mass marijuana pardon and direct an administrative review of the drug’s scheduling status. And he is again highlighting that there are “clearly” medical benefits of cannabis—which he says shouldn’t be ignored because of separate concerns about youth use.

The Justice Department and U.S. Department of Health and Human Services (HHS) have committed to quickly carrying out the separate scheduling review the president directed, which could result in a recommendation to place cannabis in a lower schedule or remove it altogether, effectively legalizing the plant under federal law.

Labor Secretary Marty Walsh said that officials will be working diligently to ensure that people who received a pardon for federal marijuana offenses under the presidential proclamation are not impeded from future job opportunities.

Vice President Kamala Harris said last month that voters should elect lawmakers who support marijuana reform so that Congress can enact a “uniform approach” to the issue in light of the president’s cannabis pardons.