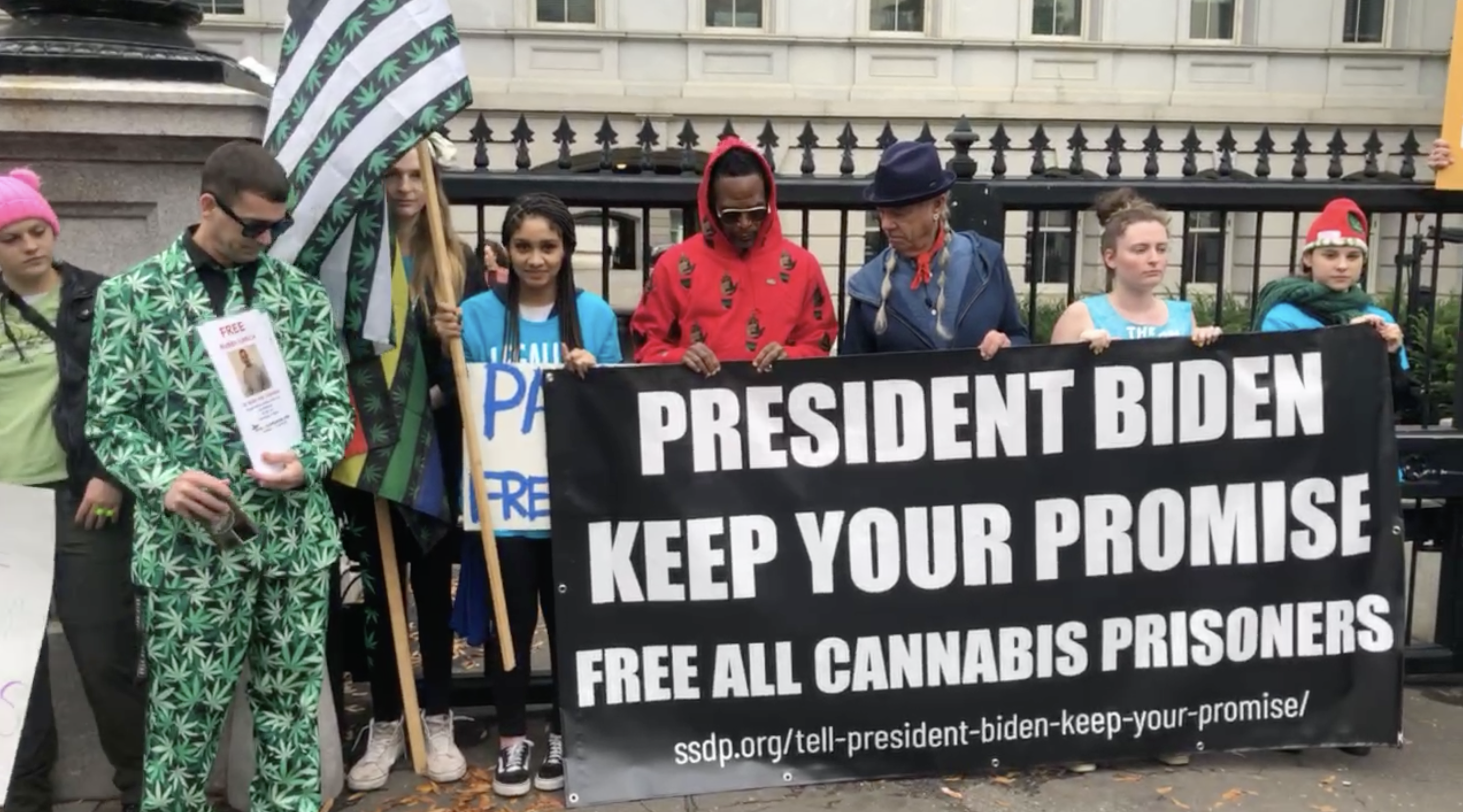 An activist was arrested on Monday afternoon amid a protest staged outside of the White House to call attention to President Joe Biden’s yet unfulfilled promise to release people incarcerated over marijuana.

After several hours of speeches and civil disobedience—at one point shutting down a major street in Washington, D.C., while carrying a giant, 50-foot inflatable joint—one activist was arrested by Secret Service after breaching a White House gate.

Advocates were planning for additional arrests, but agents spoke with organizers and seemed to convince the group not to breach additional barriers. Speeches continued, with many participants demanding the release of the arrested activist, as well as federal marijuana prisoners broadly.

The advocate who breached the gate, Sarah Noon of Columbia University’s chapter of Students for Sensible Drug Policy (SSDP), was forced to the ground by officers, who shouted at onlookers to stay back.

“I’m here today because Biden made a promise to release all cannabis prisoners, and he has fallen short of that promise,” Noon said in a statement. “We are civil resisters. ‘Civil’ because we are friends of the government, but we can not cooperate with the unfulfilled promise from the leader of our government.”

SSDP, the Last Prisoner Project (LPP), DCMJ and other groups organized the the protests, which involved call-and-response chants and speeches from advocates and formally incarcerated people. Biden’s own comments supporting decriminalization were played over a loudspeaker on repeat.

At one point, activists blocked an entrance to the nearby Old Executive Office Building, where many White House staffers work, and then moved to an entrance of the White House itself.

The protest then moved to the Democratic National Committee (DNC) headquarters, with activists reviving their speeches and chants around 4:20 PM ET.

The action was planned before Biden made a surprise announcement this month, pardoning about 6,500 people who’ve committed federal marijuana possession offenses, as well as those who’ve violated the law in Washington, D.C. The president also directed an administrative review of cannabis scheduling.

But by Biden’s own admission, the clemency resulted in zero instances where people are being released from prison over marijuana crimes. Activists said that lack of relief despite Biden’s stated position that nobody should be in jail because of cannabis was reason enough to follow through with the protest.

“We are here to say that ‘zero’ is not good enough as far as his promises to our community, to the folks that are currently incarcerated and to the nation that wants to go forward in ending the war on drugs and making sure nobody spends time in prison for cannabis offenses ever again,” SSDP Executive Director Jason Ortiz told the crowd outside of the White House on Monday.

Biden isn’t able to unilaterally force states to issue comparable pardons at the state-level, though he has asked governors to follow the administration’s lead. Advocates have also pushed the president to expand the relief for groups that weren’t covered under the limited proclamation, such as immigrants and those who’ve sold marijuana.

We’ve moved back on to Pennsylvania Ave in front of the White House blocking a different entrance. #BidenRelease420Prisoners pic.twitter.com/r8yb4IqI0X

The president has been touting his mass pardon, indicating that he views it as a rallying point ahead of next month’s midterm election. But he suggested on Friday that he has no intention of granting relief to people who are in prison for selling cannabis.

“I’m keeping my promise that no one should be in jail for merely using or possessing marijuana,” he said. “None. And the records, which hold up people from being able to get jobs and the like, should be totally expunged. Totally expunged.”

“You can’t sell it,” the president added. “But if it’s just use, you’re completely free.”

Advocates aren’t sold on Biden’s claim that the pardon constitutes a fulfilled promise. For one, a presidential pardon isn’t exactly expunging records as Biden said he supports; it may restore certain civil liberties (e.g. the right to possess a firearm), but the record isn’t fully cleared and may still be used against a person.

Then there’s the fact that there are an estimated 2,800 people currently in federal prison for marijuana convictions that aren’t limited to simple possession.

“Anyone who has a record should be let out of jail, their records expunged.” – @POTUS #BidenRelease420Prisoners pic.twitter.com/RkoA6UxLmH

“Biden’s tough on crime policies in the 90s resulted in extreme sentences being handed down for non-violent drug crimes,” Ortiz said in a press release on Monday. “Biden promised to release these prisoners to address his role in creating mass incarceration and the cannabis community has a moral obligation to hold his feet to the fire until our friends are reunited with their families.”

LPP Executive Director Sarah Gersten said that “if President Biden truly wants to repair the harms of our nation’s unjust policy of prohibition, this initial progress must be followed up with bolder action—action that would actually lead to freedom for cannabis prisoners.”

Activists separately staged protests outside of the Drug Enforcement Administration (DEA) headquarters in Virginia in May, demanding that the agency allow terminally ill patients to access psilocybin therapy. There were arrests over acts of civil disobedience in that protest.

Meanwhile, the Justice Department and U.S. Department and Health and Human Services (HHS) have committed to quickly carry out the separate scheduling review the president directed, which could result in a recommendation to place cannabis in a lower schedule or remove it altogether, effectively legalizing the plant under federal law.

Meanwhile, Labor Secretary Marty Walsh said that officials will be working diligently to ensure that people who received a pardon for federal marijuana offenses under the presidential proclamation are not impeded from future job opportunities.

Vice President Kamala Harris said this month that voters should elect lawmakers who support marijuana reform so that Congress can enact a “uniform approach” to the issue in light of the president’s cannabis pardons.

A series of polls have shown that Americans strongly support the president’s pardon action, and they also don’t think that marijuana should be federally classified as a Schedule I drug.

Biden Health Secretary Has Already Talked To FDA About Marijuana Scheduling Review, Which Will Move ‘Quickly’