Just one in four Republicans agree that people of color are unfairly punished over marijuana, despite data consistently showing that Black and Hispanic people are disproportionately arrested over cannabis compared to white people, according to a new poll.

It’s a significant finding, especially given how commonly studies and reports about racial discrimination in cannabis enforcement are cited to support efforts to enact marijuana reform. The survey also shows that the message apparently isn’t getting through to sizable portions of Democrats and independents, either, though they are far more likely to acknowledge disparities than GOP voters are.

Overall, 52 percent of Americans agreed strongly or somewhat with the idea that “people of color are unfairly punished for possession of marijuana compared to white people,” the survey from Data for Progress found. 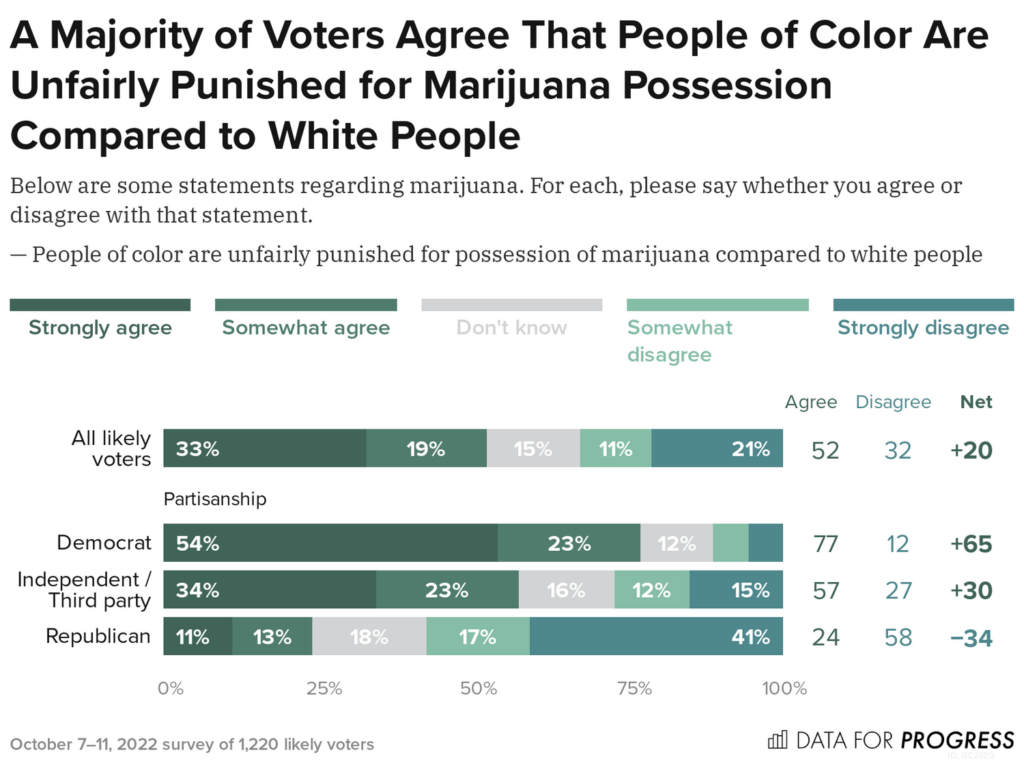 A plurality of white people (48 percent) believe people of color are unfairly punished. But minority respondents themselves are far more likely to agree with the sentiment, with 72 percent of Black people and 64 percent of Hispanic people saying that’s the case.

A majority of people under 45 (65 percent) said minorities were unfairly punished compared to white people over the low-level marijuana offense, versus 45 percent of people over 45.

“With only half of Americans acknowledging the reality that criminalization is enforced in a racially disparate way, clearly more work is needed by advocates and elected leaders to educate the public,” Justin Strekal, founder of the BOWL PAC, told Marijuana Moment. “Given the partisan divide, now is the time for Republican leaders to speak up or be defeated by someone who will.”

One of the most widely cited reports on racial disparities in cannabis criminalization comes from the ACLU, which found that Black people are about four times more likely to be arrested over marijuana possession compared to white people, despite rates of consumption being roughly the same.

It’s also a fact that the war on drugs in the U.S. was largely precipitated out of racial animus, with an aide to President Richard Nixon admitting that the administration sought to associate Black people and political enemies with drugs as a means to advance their agendas. That was referenced in a congressional resolution introduced in 2018.

Officials with the Drug Enforcement Administration (DEA) Museum recently acknowledged how “racial, ethnic and class prejudice” were foundational principles of the drug war that partly led to the agency’s own founding.

The Library of Congress has documented how racist and stigmatizing media depictions of marijuana were used to reinforce prohibition, for example.

The new Data for Progress poll involved interviews with 1,220 likely voters from October 7-11, with a +/-3 percentage point margin of error.

The survey also found that the majority of Americans back Biden’s cannabis pardons move, at 72 percent. That includes a majority of likely Republican voters (55 percent).

NEW POLL: After Biden’s announcement that he would pardon all federal offenses of simple marijuana possession, 72 percent of voters support the decision — including majorities of Democrats, Independents, and Republicans.https://t.co/Enl7w81U9o

Several prior surveys conducted and published this past week have also asked Americans about a how they feel about Biden’s marijuana clemency action, and they’ve consistently shown that people are in favor of the decision.

Yet another new poll on the topic, from CivicScience, showed 67 percent of respondents strongly or somewhat back Biden’s pardon action, while a survey from YouGov found that 62 percent of Americans support the move.

By a margin of 62% to 25%, most Americans approve of Biden's federal pardons of those convicted of marijuana possession.

Consistent with prior surveys, Data for Progress, in its poll, also found that an overwhelming majority (80 percent) don’t believe that cannabis should be in Schedule I of the Controlled Substances Act (CSA) alongside drugs like heroin. That includes Democrats (88 percent), independents (82 percent) and Republicans (70 percent). 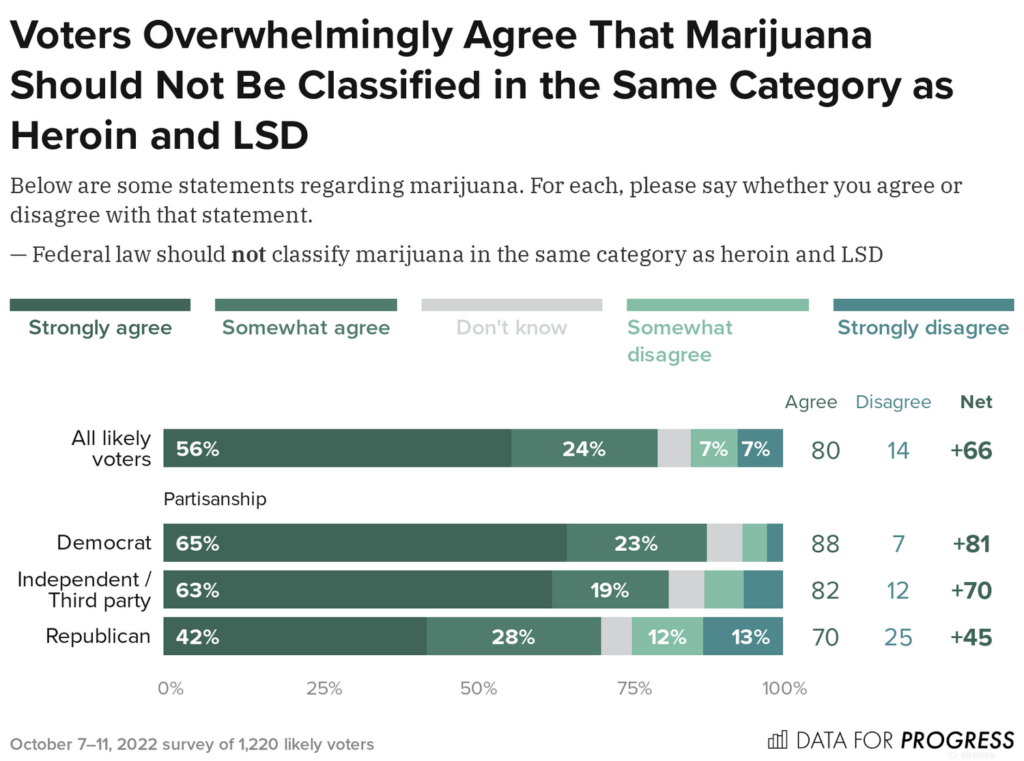 All three of the newest polls also asked people whether they support legalizing marijuana overall, and each showed majority support for the reform. Data for Progress showed support at 66 percent, CivicScience found 70 percent want cannabis legal in their state and YouGov showed 55 percent backing the reform.

Pardoning past offenses and clearing records are popular, but legalizing marijuana use is slightly more divisive. A smaller majority overall is in favor (55%), with Democrats (66%) and Independents (56%) more likely to support legalization than Republicans (41%). pic.twitter.com/vC98nChAMZ

Data for Progress also showed that a majority of Americans (67 percent) across the political spectrum believe that nobody should be in jail over cannabis, and 63 percent said marijuana should be legal in all states. 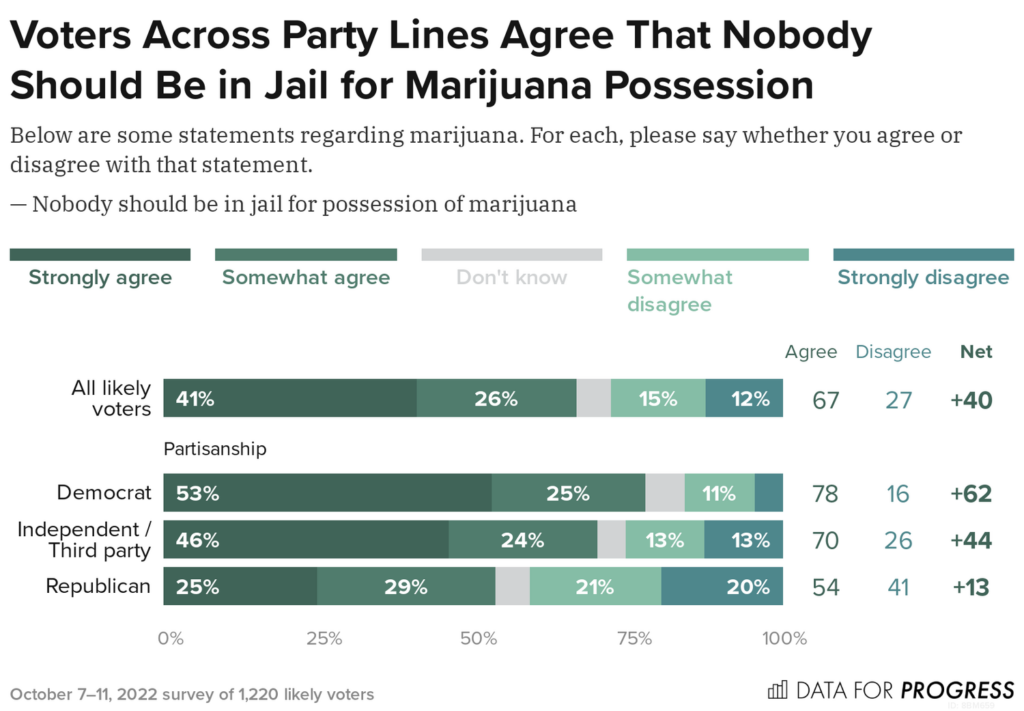 The organization also found that 63 percent of respondents believe marijuana should be safer in the U.S. if was legal. Another 64 percent said that cannabis has positive health effects. And 71 percent said legalization would generate tax revenue that would benefit society.

That firm additionally asked respondents if “U.S. marijuana policy should be more or less forgiving than President Biden’s decision to pardon thousands of Americans convicted of simple possession under federal law.”

YouGov also surveyed respondents about their own personal experience with cannabis. It found that half of Americans say they’ve at least tried marijuana.

Meanwhile, Vice President Kamala Harris said on Monday that voters should elect lawmakers who support marijuana reform so that Congress can enact a “uniform approach” to the issue in light of the president’s cannabis pardons.

Sen. Cory Booker (D-NJ) said that he appreciates the “significant” step that the president has taken, but there’s “more that we can do” to address the drug war and he’s “very hopeful” that additional reform can be enacted before the end of this Congress.

While the senator said that he does believe legalization could pass, the expectation is that Congress will work to advance a package of incremental marijuana reform proposals that includes banking and research legislation during the lame duck session.