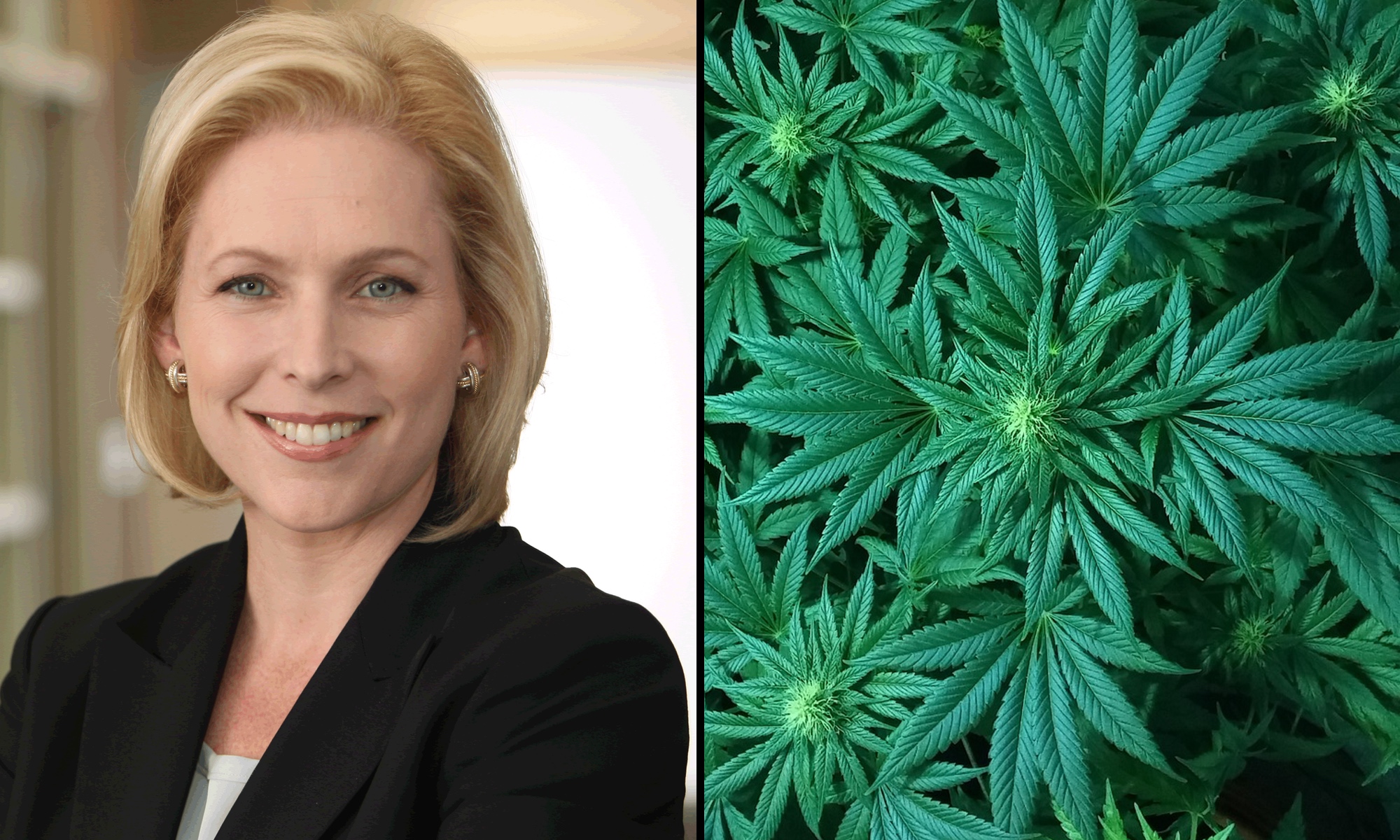 The senator, who has an A grade from NORML, has become one of the most vocal advocates for federal marijuana reform in Congress, co-sponsoring multiple pieces of legislation and frequently talking about the issue in speeches and on social media. However, she did not start off her political career supporting cannabis reform.

This piece was last updated on August 28, 2019 to include the candidate’s statements and policy actions on marijuana since joining the race. It will continue to be updated on a rolling basis.

Gillibrand did not co-sponsor any cannabis-related bills during her time in the House from 2007 to 2009, although colleagues filed several. Also during that period she voted against a floor amendment to protect state medical marijuana laws from federal interference.

However, she has evolved considerably on the issue in recent years and has signed her name onto several notable Senate cannabis bills. That includes the Marijuana Justice Act, which would remove cannabis from the Controlled Substances Act and punish states that enforce marijuana laws disproportionately against people of color.

She also co-sponsored legislation designed to protect medical marijuana states from federal interference, make it easier to conduct research on cannabis and legalize industrial hemp. Another research-related bill she co-sponsored would encourage the U.S. Department of Veterans Affairs (VA) to study how marijuana can treat specific conditions like post-traumatic stress disorder.

During testimony at a Senate Judiciary subcommittee hearing in 2016, Gillibrand said that “I know some people are saying that we should wait until there’s more research before changing the laws, but the one thing blocking the research is the law.”

In April 2018, Gillibrand sent a letter to then-Attorney General Jeff Sessions, requesting that he attend a meeting with some of her constituents who’ve been arrested for non-violent marijuana offenses.

“It is an American principle that, no matter the law, it should be applied equally to all people, regardless of their race or background,” she wrote. “Sadly, as you will hear from my constituents, for decades, the so-called ‘War on Drugs’ has not been pursued with equality.”

She also joined a bipartisan coalition of lawmakers who sent a letter to Sessions, imploring him to update them on the status of applications to cultivate cannabis for federal research purposes.

Since announcing her candidacy, the senator signed on as a cosponsor of several pieces of cannabis-related legislation.

That includes a bill to deschedule marijuana and withhold certain federal funding from states with discriminatory enforcement, another to require VA research into the potential benefits of cannabis for military veterans, one that would provide for the federal taxation of marijuana sales, one that would protect banks that service the cannabis industry from being penalized by federal regulations and legislation that would deschedule marijuana and provide funding to expunge past records. She also cosponsored a bill that would protect students with drug convictions from losing their federal financial aid.

“I’m for decriminalization of marijuana, I want to make it retroactive,” Gillibrand said during a campaign stop in New Hampshire in March 2019. “I think a lot of our drug laws are horrible.”

She reiterated that position, emphasizing racial disparities in U.S. drug laws, at a separate event.

We need to dismantle institutional racism.

She expanded on those positions at a rally in New York.

“That’s institutional racism. Your son will likely not have to deal with that because he is white. So when someone says white privilege, that is all they are talking about. That his whiteness will mean that a police officer might give him a second chance. It might mean that he doesn’t get incarcerated because he had just smoked a joint with his girlfriend.”

A poignant moment at @SenGillibrand's Youngstown, OH roundtable occurred when a white woman holding her baby asked her about how Dems talk about white privilege while she is still struggling. Gillibrand took a beat, and then answered the woman’s question.

“If I am president, I would use the Small Business Administration to help women and minority-owned businesses get the financial help they need in order to compete with the wealthier, established players,” Gillibrand said during a meeting with marijuana industry stakeholders in May.

In June 2019, the candidate released a comprehensive marijuana legalization plan that included a proposal to “require coverage for medical marijuana in all health insurance plans, including Medicare, Medicaid, and the VA.”

Her campaign also pushed a survey to supporters that asked about their views on cannabis legalization.

“Our current drug policies are rooted in institutional racism and result in the mass incarceration of people of color,” the poll stated. “Do you believe it’s time to legalize marijuana and right the wrongs of our country’s failed war on drugs?”

For the last five years, Gillibrand has made Twitter a central platform for her marijuana reform advocacy.

But while she initially focused on medical cannabis, her views on the issue evolved and so did the tweets on her feed.

DOJ should investigate how pharma helped create the opioid crisis, not institute policies that take marijuana based medicines from patients and needlessly target non-violent minority youths.

Gillibrand has routinely railed against the pharmaceutical industry, which she criticized for opposing cannabis legalization.

Big pharma keeps pushing back against legalizing medical marijuana because, in many cases, they want to continue to sell addictive drugs and dominate the market for drugs that address chronic pain. That's wrong.

It is time to rework our cannabis laws. https://t.co/g23trjnJcT

“To them, it’s competition for chronic pain, and that’s outrageous because we don’t have the crisis in people who take marijuana for chronic pain having overdose issues,” the senator said. “It’s not the same thing. It’s not as highly addictive as opioids are.”

She also criticized Sessions for rescinding Obama-era guidance that directed prosecutors to generally not interfere with state marijuana laws.

Attorney General Sessions' decision to restrict states’ ability to legalize and decriminalize marijuana is either willfully ignorant of the medical science or an act of greed on behalf of the pharmaceutical industry. In either case, it's an attack on patients, and it's wrong. pic.twitter.com/Kiw8nOmPb7

Black and Latino New Yorkers are almost 10 times more likely to be arrested for the possession of marijuana than their white neighbors – though usage rates are about the same.

“Millions of Americans’ lives have been devastated because of our broken marijuana policies, especially in communities of color and low-income communities,” Gillibrand said in a press release. “Just one minor possession conviction could take away a lifetime of opportunities for jobs, education, and housing, tear families apart, and make people more vulnerable to serving time in jail or prison down the road.”

“The reality that my 14-year-old son would likely be treated very differently from one of his Black or Latino peers if he was caught with marijuana is shameful. Legalizing marijuana is a social justice issue and a moral issue that Congress needs to address to help fix decades of injustice caused by our nation’s failed drug policies.”

The Marijuana Justice Act takes steps to fix stark inequalities in our criminal justice system and protects patients who need medication. It’s a commonsense bill – and I’m proud to join @CoryBooker as a cosponsor. Americans have spoken and demanded change. It’s time to act. pic.twitter.com/1VfFbEipYJ

“Discriminatory drug policies are robbing people and families of job opportunities, time with their loved ones and their futures. In New York, black and Latino people are almost 10 times more likely to be arrested for possession of marijuana than their white neighbors – though usage rates are the same,” the sign-up page said. “We have to act now to fix this horrible injustice. It’s time to decriminalize and legalize marijuana so we can begin repairing the harm caused by the failed War on Drugs. Add your name right now to tell Congress: Decriminalize marijuana!”

Gillibrand wrote a letter in 2015 that praised a Scientology-related organization for its efforts to promote a “drug-free world.”

Beyond Capitol Hill, the senator has worked to build support for legislation to legalize marijuana in her home state of New York. Her office has issued numerous press releases about cannabis policy in recent years.

During a presidential campaign stop in Iowa, she answered a question about how she would help military veterans by saying it is important to “make sure they have access to medicines like medical marijuana.”

Gillibrand’s campaign website also discusses her support for reform, under the headline, “We need to fix our broken criminal justice system.”

“When low-income people and people of color face huge disparities in arrests, sentencing and incarceration compared to wealthy and white people for the same or lesser charges, it’s a clear and urgent sign that we need to rectify the injustices in our criminal justice system,” it says. “We have a mass incarceration crisis, and institutional racism pervades the way we enforce laws. To rectify this, we should legalize marijuana at the federal level and expunge past records; reform our sentencing laws so that judges can have more flexibility when dealing with low-level, nonviolent drug offenses; change federal rules for our prisons; end cash bail; and invest resources in communities harmed by the racist war on drugs.”

Gillibrand doesn’t appear to have publicly discussed whether she has ever consumed marijuana, but she has repeatedly cited conversations with families and patients who’ve benefited from medical cannabis as a motivating factor behind her reform advocacy.

Marijuana Under A Gillibrand Presidency

It stands to reason that the senator would prioritize federal marijuana reform as president, especially in light of her co-sponsorship of the Marijuana Justice Act and the extent to which she has focused on the issue in public statements. It seems likely that she would continue that record if elected to the Oval Office.