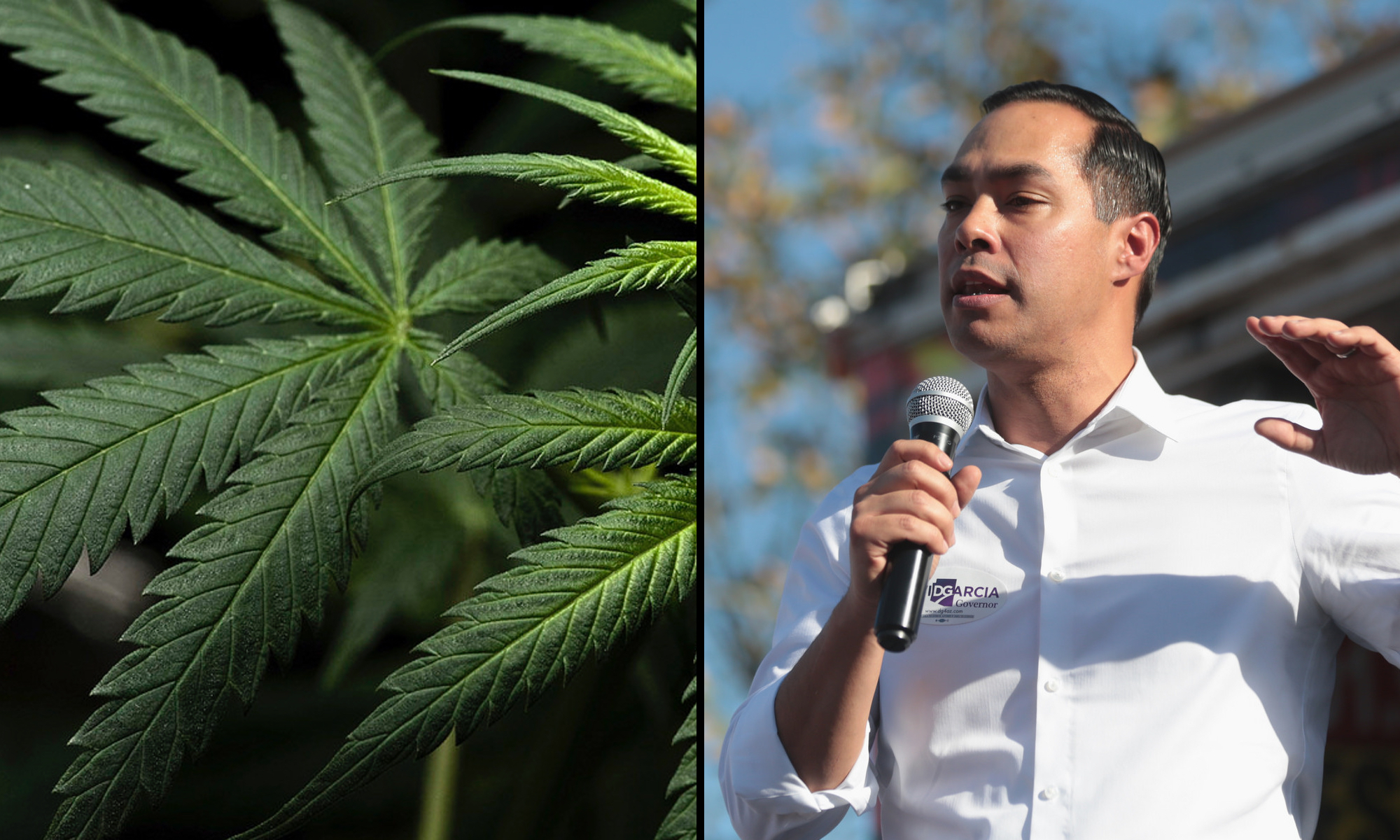 Julián Castro, a former U.S. Housing and Urban Development secretary and San Antonio mayor, announced on January 12, 2019 that he was running for president. On January 2, 2020, he ended his campaign.

Castro has a relatively thin record on marijuana, but there are a few clues about how he would handle cannabis policy if elected to the White House.

This piece was last updated on January 2, 2020 to include the candidate’s statements and policy actions on marijuana since joining the race.

Unlike his identical twin brother Joaquín, Julián Castro has never served in Congress and, as such, hasn’t had the opportunity to vote on federal cannabis amendments or to sponsor marijuana legislation.

But in his role as a member of President Barack Obama’s cabinet, he did oversee one federal marijuana policy action.

Under his leadership, the Department of Housing and Urban Development (HUD) published a 2014 memo clarifying that owners of federally assisted housing facilities are required to deny entry to people who use marijuana, even for medical purposes in accordance with state law. The guidance did say, however, that it is up to owners’ discretion whether people who already live in public housing must be evicted if cannabis use is later discovered.

The document was an update to a similar 2011 memo issued under prior Obama administration HUD Sec. Shaun Donovan.

In a criminal justice reform plan Castro released in October, he called for legalizing marijuana, expunging prior cannabis convictions and reinvesting in communities most impacted by the drug war.

“As president, I will bring our misguided War on Drugs to an end,” he said. “We will regulate the market and place a tax on all recreational sales, investing billions in revenue generated in the communities disproportionately harmed by the War on Drugs.”

“We need to ensure that we build on [sentencing reform legislation] and reform our criminal justice system,” Castro said in a speech to the National Action Network in April 2019. “That we do things like legalize marijuana. That we encourage communities to go back and expunge the records of too many who have been caught up in this criminal justice system and locked behind bars for small-level offenses.”

Castro said in November that he’s open to decriminalizing drugs beyond marijuana and voiced support for allowing local jurisdictions to implement safe consumption sites where people can use illicit substances in a medically supervised environment.

He reiterated his support for legalization during an interview on The Breakfast Club radio show.

“I think that we have good examples in places like Colorado of how you can [legalize cannabis],” he said. “Obviously it’s going to be regulated and the regulation of it needs to be thoughtful.”

He went on to say that he hopes communities that have been disproportionately impacted by the drug war are able to benefit from a legal cannabis market and said legalization should be coupled with expungements for prior marijuana convictions.

“I’m a fan of some of these jurisdictions that have gone backward to try and expunge records because there have been so many people, especially in communities of color, that have ended up incarcerated and serving time in jail for relatively minor offenses and for marijuana that in some states is already legal,” Castro said. “We need to do that, we need to build on that First Step Act that was just passed. We need to continue to reform our criminal justice system.”

His point about the need for expungement also came up during a CNN town hall event.

“On top of [legalization] we need to go back and expunge the records of people who were imprisoned because of using marijuana. And this is important. This part is important, in part, because there are a lot of people, and folks in this audience probably know some of them who have served jail time, right, and disproportionately it’s impacted communities of color and poor neighborhoods of people who have been imprisoned because of marijuana use. So it’s not enough just to say we want to legalize it. We actually want to go back and expunge these records.”

“Legalize it. Then expunge the records of folks who are in prison for marijuana use,” he tweeted.

Legalize it. Then expunge the records of folks who are in prison for marijuana use. #CastroTownHall

Legalize it. Expunge the records of the victims of the war on drugs. #JuliánDebates #DemDebate

Castro also emphasized his support for legalization in a speech at the music and arts festival South By Southwest.

“We need sentencing reform, we need to invest in public defenders, we need to do cash bail reform and also do things like legalize marijuana and invest in diversion programs so that people don’t get caught up in this system in the first place,” the candidate said during a campaign stop in Iowa.

On the 86th anniversary of the end of alcohol prohibition in December, the candidate said that the country should follow suit by legalizing cannabis.

It’s #repealday, the day the United States ended the prohibition of alcohol.

86 years later, it’s time we end the federal prohibition of Cannabis once and for all.

Legalize it. Regulate it. Expunge the records of the victims of the war on drugs.

During a campaign event in New Hampshire in September, Castro said the country needs “to reimagine our criminal justice system—investing in public defenders, in sentencing reform, cash bail reform, legalizing marijuana and investing in diversion programs so that instead of ending up in jail, more young people are able to reach their dreams.”

Days later, he reiterated that point in a tweet.

We need to invest in diversion programs and legalize marijuana, so that our kids can achieve their dreams instead of getting caught up in the criminal justice system.

“We need to invest in diversion programs and legalize marijuana, so that our kids can achieve their dreams instead of getting caught up in the criminal justice system,” he said.

We need to legalize cannabis nationwide and properly regulate products in order to keep folks safe.https://t.co/Txw3w0k8fu

In response to incidents of vaping-related lung injuries, the candidate said, “We need to legalize cannabis nationwide and properly regulate products in order to keep folks safe.”

In October, Castro answered a Twitter question about how his plan for legalization would address racial inequities in the cannabis industry.

Addressing the injustice of the failed war on drugs means that we must legalize and regulate marijuana, and ensure victims of these policies — a majority of whom were Black and Brown—have their records expunged and are given access to economic development opportunities. https://t.co/GugW2Xi3v5

“Addressing the injustice of the failed war on drugs means that we must legalize and regulate marijuana, and ensure victims of these policies—a majority of whom were Black and Brown—have their records expunged and are given access to economic development opportunities,” he replied.

Castro has been critical of Trump administration signals about potentially interfering with state marijuana laws.

A mistake. Colorado and other states have shown we can sensibly legalize marijuana with reasonable controls. https://t.co/MknXhJ0cnr

As reported in a local TV segment from early 2014, when he was San Antonio mayor, Castro was asked about cannabis during an appearance at a local high school and responded that he hadn’t yet made up his mind about legalization.

BREAKING: Does SA Mayor @JulianCastro support legalizing marijuana in SA? He says he looks forward to the analysis on the matter.#kens5news

“What I think you see across the country is a consideration about the science and what states should do, whether for instance, they should look at medical marijuana or fully legalizing it,” he said, according to a Wayback Machine archive of the now-deleted KENS-TV page. “I haven’t looked at the science yet about addiction and what it means, but it’s certainly something that I think deserves more scrutiny and more analysis.”

More recently, Castro retweeted a Twitter post from Rep. Ro Khanna (D-CA) that highlighted local efforts to expunge prior cannabis convictions, which said, “Legalizing marijuana must include a push for restorative justice.”

Castro said at an event in Nevada that he’s “never done marijuana,” but that there’s “plenty of evidence that you can regulate this, so that you can do it in an orderly, safe way.”

"I have never done marijuana. I don't even drink alcohol. At the same time, we have plenty of evidence … that you can regulate this, so that you can do it in an orderly, safe way" pic.twitter.com/lRILX6Louq

He also wrote in a book that he hung out in college with a “Jeff Spicoli” type, a reference to a stoner character from the film Fast Times at Ridgemont High. That said, Castro wrote that his friend “wasn’t smoking weed at the beach,” so it’s not exactly clear if he ran with the cannabis crowd as a student.

Marijuana Under A Castro Presidency

Outside of a few social media posts and statements, Castro has been relatively silent about his views on marijuana policy. But his sparse comments to date indicate that he would likely respect the right of states to implement their own cannabis laws without federal interference if elected.