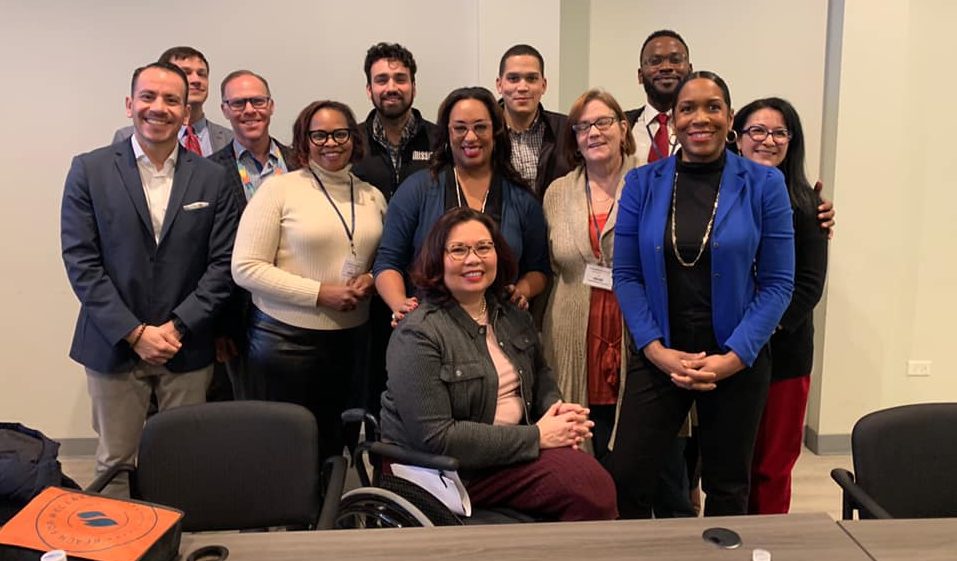 Key state and federal officials representing Illinois met at a Chicago marijuana dispensary on Sunday to discuss the need for social equity and access to banking services in the cannabis industry.

Deputy Treasurer Rodrigo Garcia was honored to join @SenDuckworth, @LtGovStratton, and others this afternoon to discuss Illinois’ new recreational cannabis program, the importance of social equity, and the need for banking options for cannabis businesses. pic.twitter.com/pIGBb4mzvU

“People of color have been disproportionally arrested and incarcerated for marijuana-related offenses for decades, and I’m proud Illinois is working to make legalization of recreational cannabis equitable for all,” Duckworth said in a press release. “I’ll keep working with these local leaders to make sure equity and justice are at the forefront of this process.”

Part of ensuring that the market is equitable means passing legislation at the federal level to shield financial institutions that service marijuana businesses from being penalized by regulators, the lieutenant governor said at the Mission South Shore dispensary in Chicago.

Thank you, @SenDuckworth, for convening a conversation about normalizing banking for #cannabis related businesses.

Partnership with the #banking industry is critical and financial products to serve the market are especially important for entrepreneurs of color. #JEO #equity pic.twitter.com/5b29PGZr7u

“I want to thank U.S. Sen. Duckworth for hosting this important discussion and for her leadership on this issue. We must change old banking laws, ensure public safety, and promote fairness within the cannabis industry,” he told Marijuana Moment. “For the past couple of years, we have pushed for state and federal changes to make sure these legitimate and legal cannabis businesses can use banks and credit unions like other legitimate and legal businesses. Doing so will minimize the risk of theft and promote safety for this industry.”

To that end, Duckworth is a cosponsor of a bipartisan bill to free up banks to work with the cannabis industry. She’s also signed onto legislation to federally deschedule marijuana.

4Front Ventures President Kris Krane, whose company operates the Mission South Shore shop, told Marijuana Moment that the senator “expressed optimism” that banking reform can be achieved in Congress, though she recognized that the chair of the Senate Banking Committee’s recent comments on proposed changes to the House-passed version of the legislation pose a challenge.

According to Krane, Duckworth said at the dispensary that Chairman Mike Crapo (R-ID), whose panel has jurisdiction over the Secure and Faire Enforcement (SAFE) Banking Act, was using “delay tactics” when he announced last month that he wants to revise the bill so that only businesses selling marijuana products with a maximum of two percent THC can access financial services, among other changes.

The senator also “floated the idea that it might wind up [attached to] a larger omnibus bill if Crapo winds up stonewalling,” Krane said. However, “they’re going to continue to try to work with Banking Committee to try to get it done there.”

Watch a short ABC 7 news segment on the cannabis meeting below:

“First of all, just the fact that all of these high-ranking elected official were comfortable not only having the discussion but having it inside a legal cannabis dispensary shows just how much progress we’ve made on this issue,” he said. “We were really honored to host them, to participate in this discussion and I genuinely believe that some progress is going to come out of this.”

The meeting, which also involved a tour of the shop, represents the latest in a series of high-profile dispensary visits made by politicians interested in reform.

For example, this is at least the second cannabis dispensary visit for the lieutenant governor, who was among the first customers to purchase a marijuana product in Illinois on the first day of legal sales on January 1.

In 2018, then-Rep. Dana Rohrabacher (R-CA) took a cannabis tour to a dispensary in California with a busload of senior citizens.

This story was updated to include comment from Frerichs.