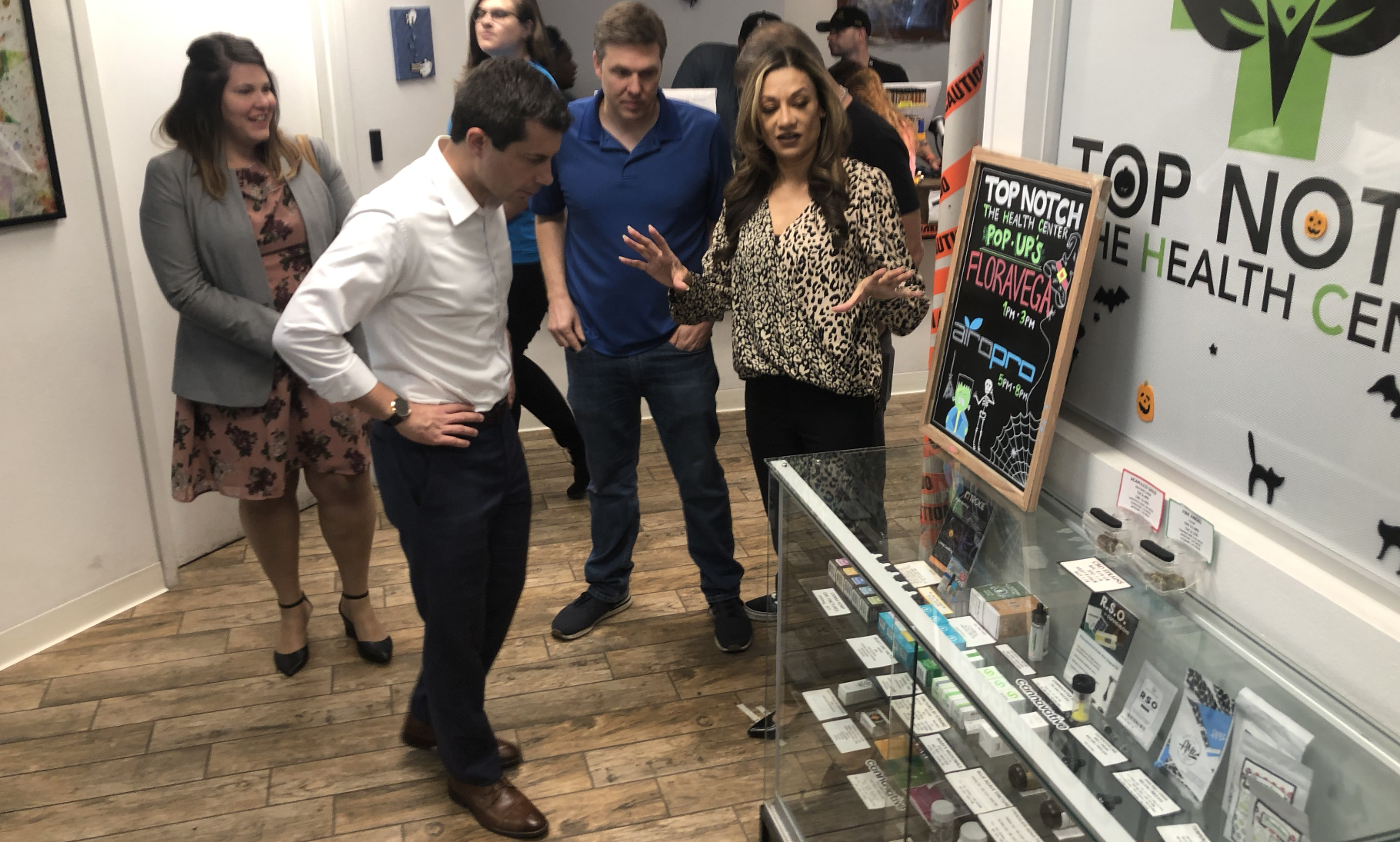 South Bend, Indiana Mayor Pete Buttigieg toured a marijuana grow house and dispensary in Las Vegas on Wednesday. During the event, which Marijuana Moment attended, the 2020 Democratic presidential candidate spoke with business owners about the challenges they face under federal prohibition and expanded on his vision for cannabis reform.

Buttigieg visited Top Notch, a minority-owned marijuana shop that says it services more than 1,000 customers and patients per day. He asked the staff questions about how people choose cannabis products that are right for them, the manufacturing process and what legislative fixes are needed at the federal level to ensure that these businesses have access to financial services available to most industries.

He did not purchase any cannabis during the visit, however, despite acknowledging that he has indulged a “handful of times a long time ago.”

“I’m on the clock and it’s going to be a long work day for me,” he said before departing for a town hall event.

Alright the reveal: Mayor @PeteButtigieg is touring a minority-owned cannabis dispensary in Vegas to talk about his reform agenda. Earlier today he toured a grow house. Stick with me/@MarijuanaMoment for the latest! pic.twitter.com/yCv3OWsdMi

Buttigieg said that “people have a certain imagery of dispensaries or the marijuana industry that dates back to outdated stereotypes,” but when you visit a shop like Top Notch, “it almost reminds you of an Apple store, how tidy and carefully it’s laid out, knowledgeable employees and a legitimate business that still struggles because federal policy hasn’t caught up.”

“It was very helpful to be able to see it myself,” he said.

The mayor weighed in on a variety of cannabis-related issues following the dispensary tour, including his proposal to decriminalize possession of all drugs because oftentimes, “a sentence has done more harm than the offense that it was intended to deal with” when it comes to low-level drug charges.

Buttigieg, who served in the military, told Marijuana Moment that he’s “met a lot of veterans who rely on cannabis for the treatment of diagnosed or undiagnosed issues, often service-connected issues like post-traumatic stress.”

He voiced support for allowing doctors at the U.S. Department of Veterans Affairs (VA) to recommend medical cannabis to veterans and said that federal legalization could “pave the way for [the policy] to be supported with the VA.”

“We also see a lot of chronic pain conditions that are being medicated with opioids where there might be an alternative,” he said. “It’s very clear that the policies around this are not based on science or reason, they’re based on habit and in some cases prejudice, and we have an opportunity to change that.”

“Now there are questions about what should be approved for what indications. This should go through the same highly rigorous process that any pharmaceutical therapy would,” he said. “But there’s no reason that it should be excluded. When we get to legalization, that’ll change.”

He also ruled out the prospect of using executive action to decriminalize marijuana, stating that it “needs to be [achieved] legislatively so that this is not the whim of the president, it’s the direction our country is taking.”

The trip to the dispensary reminded Buttigieg about another issue he’s dealt with as mayor: synthetic cannabinoids.

“One of the things that went through my mind as I saw just how carefully they monitored the safety of the products sold here is the danger of something that doesn’t get talked about enough, which is so-called synthetic marijuana, or synthetic cannabinoids, many of which have nothing at all to do with actual cannabis,” he said. “They’re incredibly toxic, they’re often legal—sold at gas stations in communities like mine—and disproportionately consumed by and harming people of color, even while things that don’t have those same toxicity are being made available in a smart, well-regulated way in places like Nevada.”

“It is time for the laws of the country to evolve,” he said, “and I think we can learn a lot from how Nevada has developed the right legal.”

The site of the shop tour was intentional. Buttigieg lauded Nevada’s regulatory system and the economic benefits of legalization, but he emphasized that federal reform should be pursued with a “lens on equity and on health” and should “empower a diverse workforce, make sure that there’s diverse ownership and support independent or family-operated businesses.”

Top Notch is a rare example of such a business in Nevada, owned and operated Kema Ogden, the state’s first female minority owner of a cannabis dispensary.

Ogden told Marijuana Moment that the mayor “basically just wanted to get an idea of the flow and how things work for us and how we got into this—how it started and some of our obstacles that we go through and what would federally help us.”

Larry Smith, managing member of G Five Medical Consultant who also participated in the tour, said that a major congressional priority should be, at minimum, rescheduling cannabis under federal law “so it can open up banking” for businesses like his.

This story has been updated to correct Smith’s title. A previous version described him as a co-owner of Top Notch.