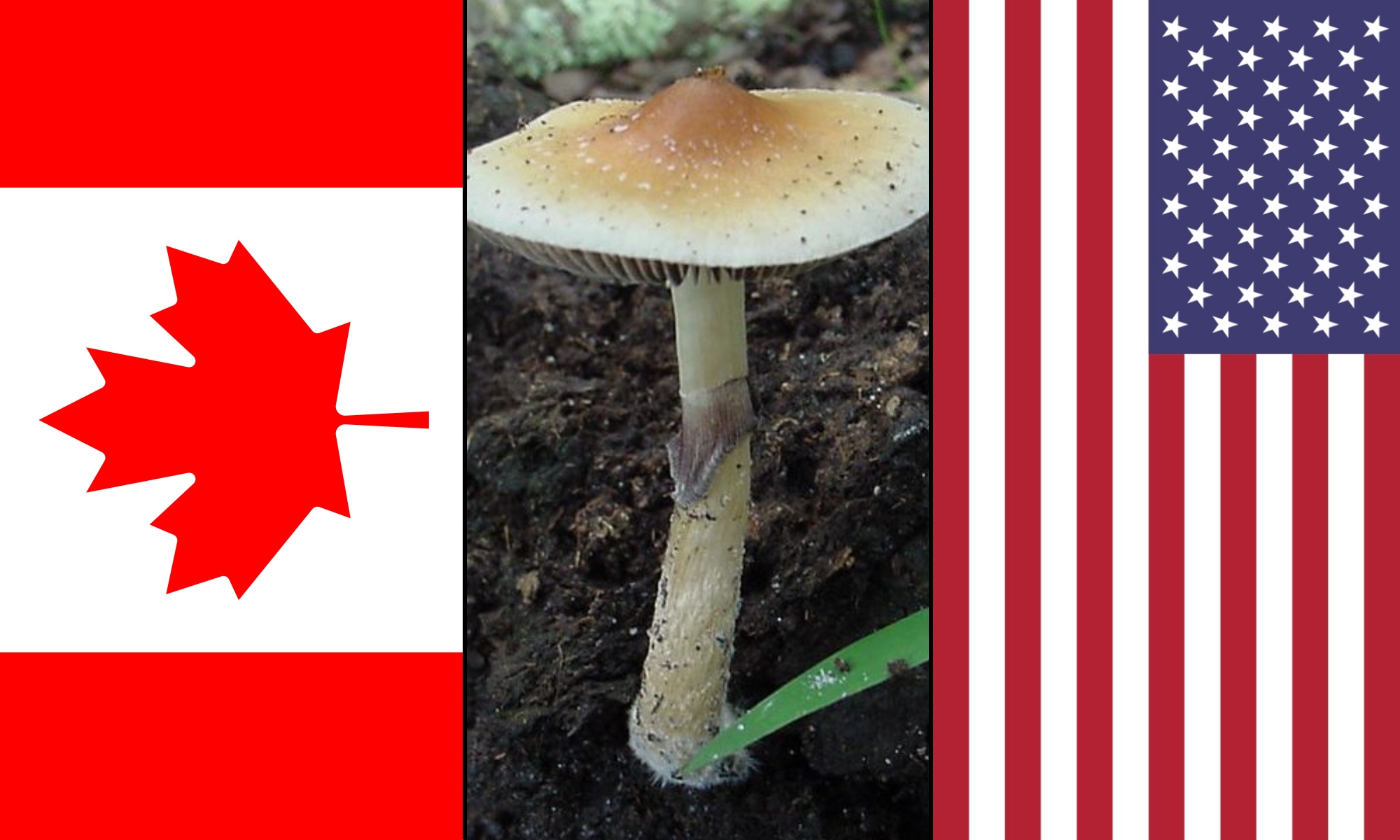 A top Canadian health official who heads up the country’s efforts to combat addiction visited Colorado, Oregon and Washington State last week to learn about their experiences implementing drug policy reform like broad decriminalization and harm reduction—meeting with the governor of Oregon and psychedelics activists, among others, on a week-long tour.

Liberal MP Carolyn Bennett, who serves as Canada’s minister of mental health and addictions, met with top state officials, activists, harm reduction professionals and law enforcement to discuss how jurisdictions on the other side of the border are addressing drug policy and working to mitigate the overdose crisis.

We’ll be sharing evidence, talking to people with lived and living experience, and discussing how our governments can learn from one another.

“We’ll be sharing evidence, talking to people with lived and living experience, and discussing how our governments can learn from one another,” the minister, who recently authorized a drug decriminalization pilot program in one of Canada’s largest provinces, said ahead of the regional tour.

On Wednesday, the minister traveled to Oregon and met Gov. Kate Brown (D), members of the Oregon Criminal Justice Commission (OCJC) and other experts about efforts to collect data and analyze the impacts of the state’s voter-approved 2020 ballot initiative that decriminalized low-level drug possession.

The discussion with Brown also focused on ancillary work the state is doing in tandem with implementing decriminalization, including” additional actions on housing, social and health supports across the state.”

Last meeting in Salem was with @OHAOregon & the Psilocybin Advisory Board, which gave us a presentation on the State’s framework for psilocybin services from manufacturing and delivery to purchase & consumption services as a result of Ballot Measure 109 that passed in Nov 2020.

It’s not clear if the meeting with the governor involved a conversation about another 2020 initiative that voters approved at the ballot to create a regulated psilocybin services program that’s actively being implemented. But Bennett, who also serves as Canada’s associate minister of health, did discuss the state’s regulatory “framework” for the psychedelics program in a separate meeting with the Oregon Health Authority and Psilocybin Advisory Board.

Later on the trip, the minister also went to Colorado and learned more about psychedelics reform, at one point meeting with Kevin Matthews, who led the 2019 campaign that made Denver the first U.S. city to decriminalize psilocybin and is actively working to build support for a statewide psychedelics legalization initiative that recently qualified for the November ballot.

The final stop of our tour was to #TheWorks Program Primary Harm Reduction Site in Longmont. So impressive to hear about how the long standing program has promoted #harmreduction through education and supplies and been so successful in the fight against #AIDS. pic.twitter.com/4zBSloMqfI

Matthews and Denver Councilman Chris Hinds, both members of the Psilocybin Mushroom Policy Review Panel that’s overseeing the implementation of the local psilocybin decriminalization policy, spoke to Bennett about “their way forward on public safety, public health, and public administration.”

“She really wanted to hear about what’s next in Denver, what’s next in Colorado, and listened to kind of grassroots activists about what decriminalization and policy reform should look like moving forward,” Matthews told Marijuana Moment on Monday.

The official heard takeaways from a comprehensive report that the policy review panel published last year that looked at law enforcement activity and health impacts of local psilocybin decriminalization. The data shows that “we haven’t had any significant public health or safety issue concerning psilocybin,” Matthews said.

“I got the sense that she’s interested in exploring” further psychedelics reform and “really making these medicines accessible to Canadians,” he said. “She was doing her homework to learn about different models that have been successful here,” and Bennett also made a point of mentioning the limited psilocybin therapeutic program for terminal patients that was authorized in 2020 under Canada’s right to try laws.

Another stop on the minister’s trip involved a meeting with Washington State Rep. Lauren Davis (D), who sponsored a bill to decriminalize low-level possession of all drugs, and members of the Washington Recovery Alliance.

Yesterday began with a meeting with @laurendavisWA & @wa_recovery to discuss Ricky’s Law and the importance of outreach, treatment & recovery services. With the advent of #988 we learned about the necessity of having mobile supports and crisis receiving facilities as in Arizona. pic.twitter.com/cqIHsyDgeq

A great first day discussing mental health, addictions, and exploring how our governments can work together to improve the well-being of people on both sides of the border. Onwards to Portland, and then Denver later in the week !

On Tuesday, Bennett had a meeting with Washington Lt. Gov. Denny Heck (D), hearing about how the state’s approach to substance misuse and mental health treatment has evolved.

Yesterday afternoon, we travelled to Olympia to meet with @LtGovDennyHeck. Thank you Lt. Gov. for a great conversation on your State’s past & current challenges with #SubstanceUse & #MentalHealth, & the continued work that is needed to ensure people have access to vital supports. pic.twitter.com/5dPYqXUEIr

While activists in Washington decided against pursuing a ballot initiative this year to broadly decriminalize possession of currently illicit drugs, the state’s laws have undergone significant changes in recent years following actions in the courts and legislature.

The state Supreme Court invalidated felony laws against drug possession in early 2021, prompting some hasty legislating that’s made the offense a misdemeanor—though that policy is currently set to expire in July 2023.

During her time in Washington, Bennett also spoke with representatives of the state ACLU chapter. She said that the discussion centered members’ “perspectives and advocacy for policy change on drug policy including decriminalization and enhancing substance use policies with proven approaches focusing on prevention, community outreach, and recovery services.”

We also met with the @ACLU_WA to discuss their perspectives and advocacy for policy change on drug policy including decriminalization and enhancing substance use policies with proven approaches focusing on prevention, community outreach, and recovery services. pic.twitter.com/iv80RYikx4

Back in Oregon, Bennett also spoke with Multnomah County District Attorney Mike Schmidt about the statewide decriminalization policy, as well as other local officials who provided information “about their work in expanding access to substance use treatment, harm reduction & other critical health and housing services for those who need them most,” the minister said.

Later, in Salem, we spoke with the Tri-Chairs of the @OHAOregon Oversight and Accountability Council – LaKeesha, Blue & Ron, about their work in expanding access to substance use treatment, harm reduction & other critical health and housing services for those who need them most. pic.twitter.com/Xovi5uRmi9

Also in Colorado, Bennett said she “had some great meetings on the current and future state of mental health, harm reduction and substance use treatment in Colorado and its interface with the criminal justice system.”

We also spoke to Denver DA @BethDAlady, who gave us her legal perspective on these reforms, including how they are diverting people from Colorado’s criminal justice system towards mental health and social services.

After speaking the chief of the Denver Police Department about how they’ve reformed policies on substance misuse-related enforcement, she met Denver District Attorney Beth McCann about the effects of the policy change and how they’ve steered people away from the criminal legal system and toward treatment.

We also spoke to Denver DA @BethDAlady, who gave us her legal perspective on these reforms, including how they are diverting people from Colorado’s criminal justice system towards mental health and social services.

“It’s clear that the overdose and toxic drug crises are taking a heartbreaking toll on both sides of the border,” Bennett said. “I look forward to continuing to learn from our American colleagues on lessons learned and solutions to bring back to Canada that will help fight this binational crisis.”

Our first stop of the day was with @HRAC_Denver, which meets people who use drugs ‘where they are’ with compassionate, harm-reduction services including a syringe access program. ED Lisa Raville's passion about helping the people she knows, loves and serves is contagious. pic.twitter.com/6UWkxoikfS

She also visited the Denver based Harm Reduction Action Center (HRAC), which provides resources like syringe access programs. Bennett remarked on the center’s portrait gallery showing faces of people who’ve died from overdoses that’s meant as a reminder of the work still to be done.

Stop #2 was at @caring4denver to meet with the truly inspiring State rep @leslieherod & ED Lorez Meinhold. The foundation’s innovative 'Many sizes fits All' approach integrates peer specialists, co-responders even for park rangers, 'inreach'  to prisons & supports for youth. pic.twitter.com/r3Jqg6cbv1

Another stop in Colorado on Friday involved a visit to the Caring for Denver Foundation (CFDF), which provides services for mental health and substance misuse treatment and education.

Bennett finished her Colorado tour with a visit to another facility in Denver, The Works Program Primary Harm Reduction Site.

“To everyone we met in Oregon, Washington and Colorado over past few days—I thank you for your hard work and dedication to improve the lives of people who use drugs and save lives,” the minister wrote.

As friends and allies, the U.S and Canada can always learn from one another, and I look forward to future discussions as we look to end the overdose crisis and build a better, healthier future for Americans and Canadians.

“As friends and allies, the U.S and Canada can always learn from one another, and I look forward to future discussions as we look to end the overdose crisis and build a better, healthier future for Americans and Canadians,” she said.

Earlier this year, Bennett’s office sanctioned a broad drug decriminalization experiment in one of Canada’s largest provinces, making it so police will not be able to make arrests, issue citations or even seize four currently illicit substances in cases of low-level possession.

The harm reduction policy that will take effect starting on January 31, 2023 and last until at least January 31, 2026 in British Columbia (B.C.), the fourth largest Canadian province by population.

Starting in 2023, people caught with up to 2.5 grams of certain illicit drugs—including opioids, cocaine, methamphetamine and MDMA—will not be criminalized. B.C. officials had propose setting the possession threshold to 4.5 grams, but the governments reached a compromise.