The number of states with legal marijuana is expected to jump significantly in 2019, and a slew of already-filed bills offers a look at what those new legal cannabis systems might look like.

While marijuana legalization legislation has already been introduced in at least 17 states—including several traditionally conservative ones—there are 10 that seem to hold the most promise of passage at this point. 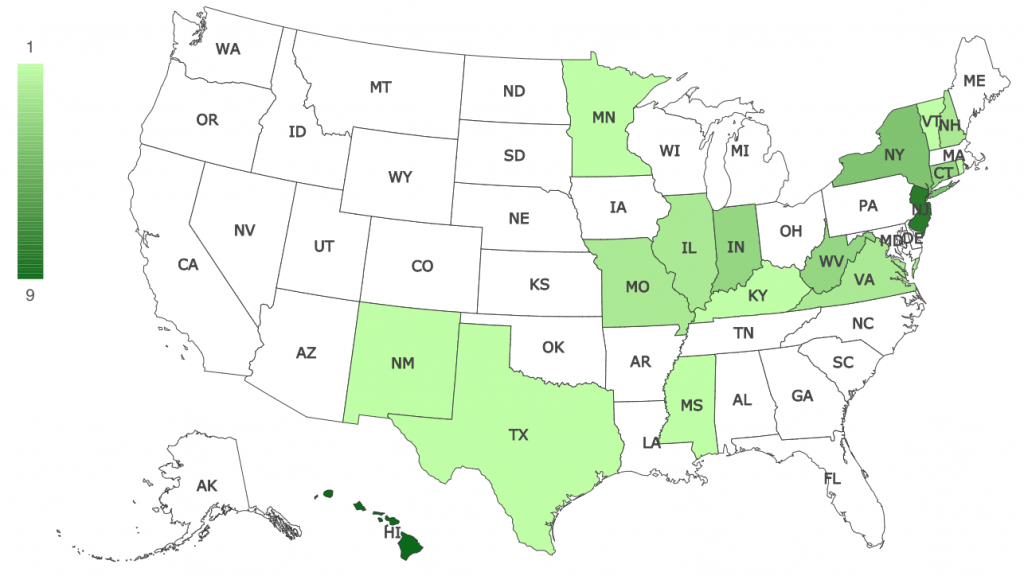 Here’s a look at the states that are most likely to send legal cannabis bills to their governors’ desks this year, in alphabetical order:

In Connecticut, several House and Senate proposals seek to fully legalize cannabis for adults 21 and older and also establish a commercial market. The Senate version was introduced on Thursday by Martin Looney (D), the chamber’s president, who also sponsored a legalization bill last year. More than a quarter of the House jointly filed a bill to legalize earlier this month. A third legalization proposal puts a focus on social justice by establishing a “cannabis equity policy through open legalization of cannabis” and includes provisions such as diversity requirements and justice reinvestment.

Hawaii Senate President Ron Kouchi (D) said that debating marijuana legalization will be a top priority for the state legislature this year. Seven legalization bills have been filed so far, and the chances of passing something in the Democratic-majority chambers are solid. The Senate Judiciary Committee is set to hold a hearing on one of the proposals on Thursday. That said, past attempts to approve cannabis reform bills in Hawaii have consistently stalled or failed, and Gov. David Ige (D) remains concerned about conflicting state and federal laws.

Illinois seems to be in an especially good position to legalize this year. At the beginning of this month, Sen. Heather Steans (D) filed a placeholder bill establish a tax-and-regulate marijuana system, but full details of her plan are so far scarce. Separate House legislation to end cannabis prohibition was introduced on Friday and has a focus on social equity, mandating that at least half of cultivation and retail facilities be located in “communities disproportionately harmed by the war on drugs.”

What’s clear, though, is that Gov. J.B. Pritzker (D) is ready and eager to sign some kind of legalization legislation—a policy he campaigned on.

Fifteen House members in Minnesota jointly filed a legalization bill last week. The legislation would amend the state constitution to allow for the possession, consumption, manufacturing and sale of cannabis and cannabis products for adults 21 and older.

Gov. Tim Walz (D) has promised to “replace the current failed policy with one that creates tax revenue, grows jobs, builds opportunities for Minnesotans, protects Minnesota kids, and trusts adults to make personal decisions based on their personal freedoms.”

New Hampshire lawmakers are moving forward with plans to fully legalize marijuana in the Granite State despite the fact that Gov. Chris Sununu (R) has threatened to veto such legislation. House Speaker Steve Shurtleff (D) believes that, with Democrats now in control of both chambers, they have to votes to override a veto. So far, two bills have been introduced to legalize and establish a retail sales system.

—
Marijuana Moment is already tracking more than 450 cannabis bills in state legislatures and Congress this year. Patreon supporters pledging at least $25/month get access to our interactive maps, charts and hearing calendar so they don’t miss any developments.

In New Jersey, eight bills have been filed to legalize marijuana, including ones that would involve expungements for past cannabis-related convictions. Legalization legislation was approved in committees late last year, but was never brought to a floor vote in either chamber. Advocates are hopeful that a bill will be taken up soon, but some concerns remain as to whether Gov. Phil Murphy (D), who campaigned on legalization, will sign legislation that doesn’t include a high tax rate for cannabis sales.

That said, the governor recently said he believes “we can make progress on this.”

On Thursday, a bill to legalize marijuana and establish a commercial sales system was filed in New Mexico, sponsored by Reps. Moe Maestas (D) and Javier Martinez (D). Gov. Michelle Lujan Grisham (D) is supportive of legalization and said a legal market will bring “hundreds of millions of dollars to New Mexico’s economy.”

There are four pieces of legalization legislation on the table in New York, where Gov. Andrew Cuomo (D) has pledged to enact a commercial cannabis system after previously calling marijuana a “gateway drug.” The Assembly version of the Marihuana Regulation and Taxation Act has 28 sponsors, while the companion bill in the Senate has 12.

Last week, Cuomo unveiled details of a legalization proposal of his own that he hopes will make it through the legislature as part of his annual budget. He’s proposing a 20 percent state tax and 2 percent county tax on marijuana transfers from wholesalers to retailers and said legalization “will create the good union jobs that we need.”

Rhode Island Gov. Gina Raimondo (D) was initially reluctant to embrace marijuana legalization but, in light of legalization efforts underway in neighboring states, she’s recently proposed ending cannabis prohibition herself. Her proposal, included in a budget request, would allow adults 21 and older to possess and purchase marijuana from a licensed retailer.

However, under the governor’s plan, cannabis could be sold commercially by licensed retailers but not grown at home for personal use. She also wants to ban high-THC products including concentrates.

Half of the Senate in Vermont, including the chamber’s president, has already signed onto a bill that would allow for commercial marijuana sales. The state legalized the personal use, possession, consumption and cultivation of cannabis last year, but there’s currently no option for people to legally buy marijuana. That said, Gov. Phil Scott (R) has said that he’d be reluctant to sign a commercial legalization bill until technology was developed to detect active impairment from cannabis on the roads.

Other states to watch in 2019 are Delaware, where legalization came close to passing last year but didn’t get the required supermajority support, and Wisconsin, where Gov. Tony Evers (D) recently said he supports legalization.