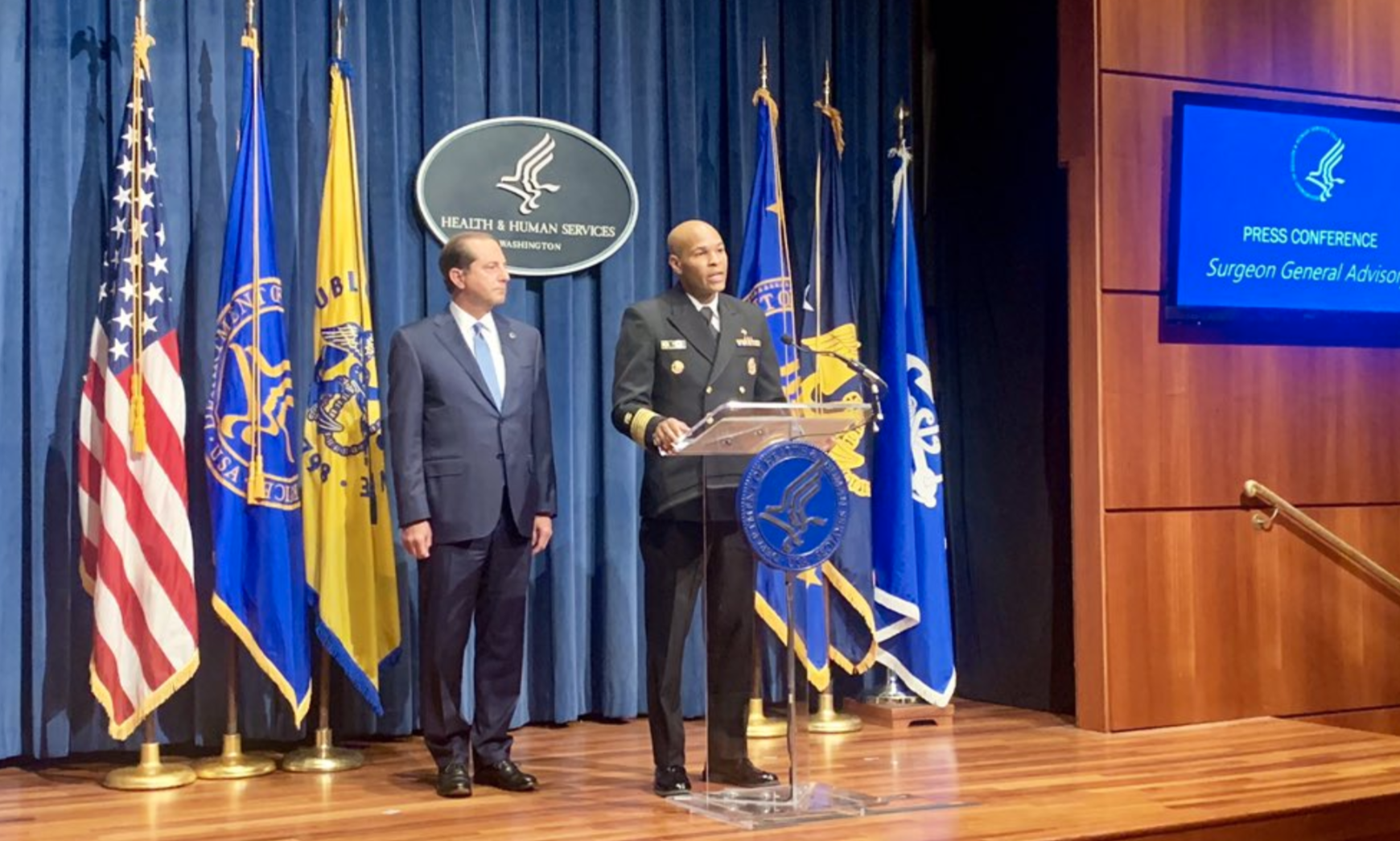 The U.S. Surgeon General issued an advisory on Thursday that warns about the risks of using marijuana, particularly for pregnant women and adolescents. But it also contains misleading statements about the cannabis legalization movement.

The advisory, the publication of which will be partially funded by a $100,000 donation out of President Donald Trump’s salary, states that no amount of cannabis is safe and emphasizes that THC potency of marijuana products has increased, which Surgeon General Jerome Adams claimed puts consumers at risk of “physical dependence, addiction, and other negative consequences.”

“There is a false perception that marijuana is not as harmful as other drugs,” Adams said in a press release. “I want to be very clear—no amount of marijuana use during pregnancy or adolescence is known to be safe.”

“I, Surgeon General VADM Jerome Adams, am emphasizing the importance of protecting our Nation from the health risks of marijuana use in adolescence and during pregnancy. Recent increases in access to marijuana and in its potency, along with misperceptions of safety of marijuana endanger our most precious resource, our nation’s youth.”

#DYK marijuana is THE most commonly used illicit drug among pregnant women? pic.twitter.com/1W8sNszIz8

While the notice doesn’t explicitly say that states should not legalize marijuana, it contends that the movement to end prohibition and the “normalization of its use” has caused youth to perceive the drug as less harmful.

“In addition, high school students’ perception of the harm from regular marijuana use has been steadily declining over the last decade,” it states. “During this same period, a number of states have legalized adult use of marijuana for medicinal or recreational purposes, while it remains legal under federal law. The legalization movement may be impacting youth perception of harm from marijuana.”

Missing from the report, however, is an acknowledgment that the federal government’s own data shows that despite shifting attitudes about cannabis, adolescent marijuana consumption has actually declined in the years since states began legalizing for recreational use.

“Marijuana’s increasingly widespread availability in multiple and highly potent forms, coupled with a false and dangerous perception of safety among youth, merits a nationwide call to action,” the advisory states.

“Today’s advisory serves as an important reminder of the health risks marijuana use poses, especially when it comes to young people and pregnant women,” White House Office of National Drug Control Policy Director Jim Carroll said. “While laws in some states have changed, the scientific evidence increasingly shows the harmful effects of marijuana use.”

“We are focused on making sure all Americans are aware of the dangers of marijuana use and the impact it has on developing minds,” he said. “The White House continues to make record investments to support community coalitions across the country that are dedicated to preventing youth substance use before it begins.”

There is NO approved safe use of marijuana. @Surgeon_General has issued an advisory on the damaging effects on the developing brain in youth and pregnant women. https://t.co/Dy1Drn2OxW

“This historic Surgeon General’s advisory is focused on the risks marijuana poses for these populations, which have been well-established by scientific evidence,” he said. “As indicated by President Trump’s generous donation of his salary to support this advisory, the Trump Administration is committed to fighting substance abuse of all kinds, and that means continuing research, education, and prevention efforts around the risks of marijuana use.”

Today's @Surgeon_General Advisory has a clear message: No amount of #marijuana use during pregnancy or adolescence is known to be safe. @POTUS’s salary donation will fund a campaign to educate the public about marijuana's dangers for the developing brain: https://t.co/xSmQo9jcgr pic.twitter.com/c8kphrtp9k

Adams and Azar discussed the advisory during a press conference on Thursday, where the HHS head also said marijuana is “linked to risk for and early onset of psychotic disorders, such as schizophrenia.”

Thank you @SecAzar, I am proud to stand with you to sound a national alarm about the harmful effects of #marijuana use on the developing brain with my new Surgeon General’s Advisory. #MJBrainEffects pic.twitter.com/x2G36sAMoX

Even while expressing concern about the potential harms of marijuana, Azar emphasized that the administration supports expanding research into the plant’s effects—something that the Justice Department is also encouraging by announcing this week that it is taking steps to approve additional cannabis manufacturers for research purposes.

“We want to make sure that research can be conducted effectively, and we know there are significant barriers to the conduct of research,” Azar said. “We want to open that up for much more research, and that is a priority of this administration.”

To be sure, many reform advocates share concerns about potential risks associated with marijuana use by young people and vulnerable populations. That’s why states that have adopted legalization models expressly prohibiting people under 21 from purchasing cannabis and certain legal states like California require labels to warn adults about consuming while pregnant or breastfeeding.

Legalization supporters point out that if marijuana weren’t prohibited at the federal level, the Surgeon General could hypothetically mandate that cannabis product packaging contain warnings similar to those required for tobacco products.

“Almost no activity is entirely without risk, which is exactly why marijuana should be legalized and regulated for adult use,” Erik Altieri, executive director of NORML, told Marijuana Moment. “While marijuana still remains objectively less harmful to the consumer than currently legal alcohol, tobacco and many pharmaceuticals, it should still be consumed responsibly.”

“Our current model of prohibition represents the utter lack of control over any aspect of marijuana or the marijuana market,” he said. “If he truly has concerns, the surgeon general’s time would be better spent advocating for a structure for regulation under which we can educate Americans about the actual harms and benefits of cannabis through public education campaigns and product labelling, instead of his current fear-mongering.”

David Nathan, a physician and board president of the pro-legalization group Doctors for Cannabis Regulation (DFCR), told Marijuana Moment that “DFCR physicians share Dr. Adams’ concern about the potential risks of cannabis use by adolescents and pregnant women” but that the group wishes he “shared our concern for the poverty that results from the economic impact of 600,000 cannabis possession arrests every year, as poverty is by far the greatest obstacle to health care access in the United States.”

“Cannabis is less harmful than many legal drugs and is non-lethal in overdose, yet millions of lives have been destroyed by its prohibition, especially in communities of color,” Nathan said. “The vilification of cannabis by the US government isn’t based in science. It is rooted in a misguided morality around adults who choose to use the drug.”

“To prevent access by minors, and to ensure proper labeling about the lack of data around use in pregnancy, the cannabis industry should be regulated rather than prohibited. We must stop using a sledgehammer to kill a weed and enact policies that optimize public health and social justice.”

Former Surgeon General Joycelyn Elders, who sits on DFCR’s honorary board, shares that perspective. Elders supports legalization and said in 2017 that the “unjust prohibition of marijuana has done more damage to public health than has marijuana itself.”

The advisory calls for “[s]cience-based messaging campaigns and targeted prevention programming” in order to “ensure that risks are clearly communicated and amplified by local, state, and national organizations.”

“Further research is needed to understand all the impacts of THC on the developing brain, but we know enough now to warrant concern and action,” the notice states, again without acknowledging the role federal prohibition has played in inhibiting such research. “Everyone has a role in protecting our young people from the risks of marijuana.”

Prohibitionist group Smart Approaches to Marijuana, whose president teased the surgeon general’s announcement in a tweet earlier this week, said in a press release that they “look forward to working with HHS and other federal government officials to help raise awareness to the harmful health impacts of marijuana commercialization and use.”

This story has been updated to include comments from Doctors for Cannabis Regulation.