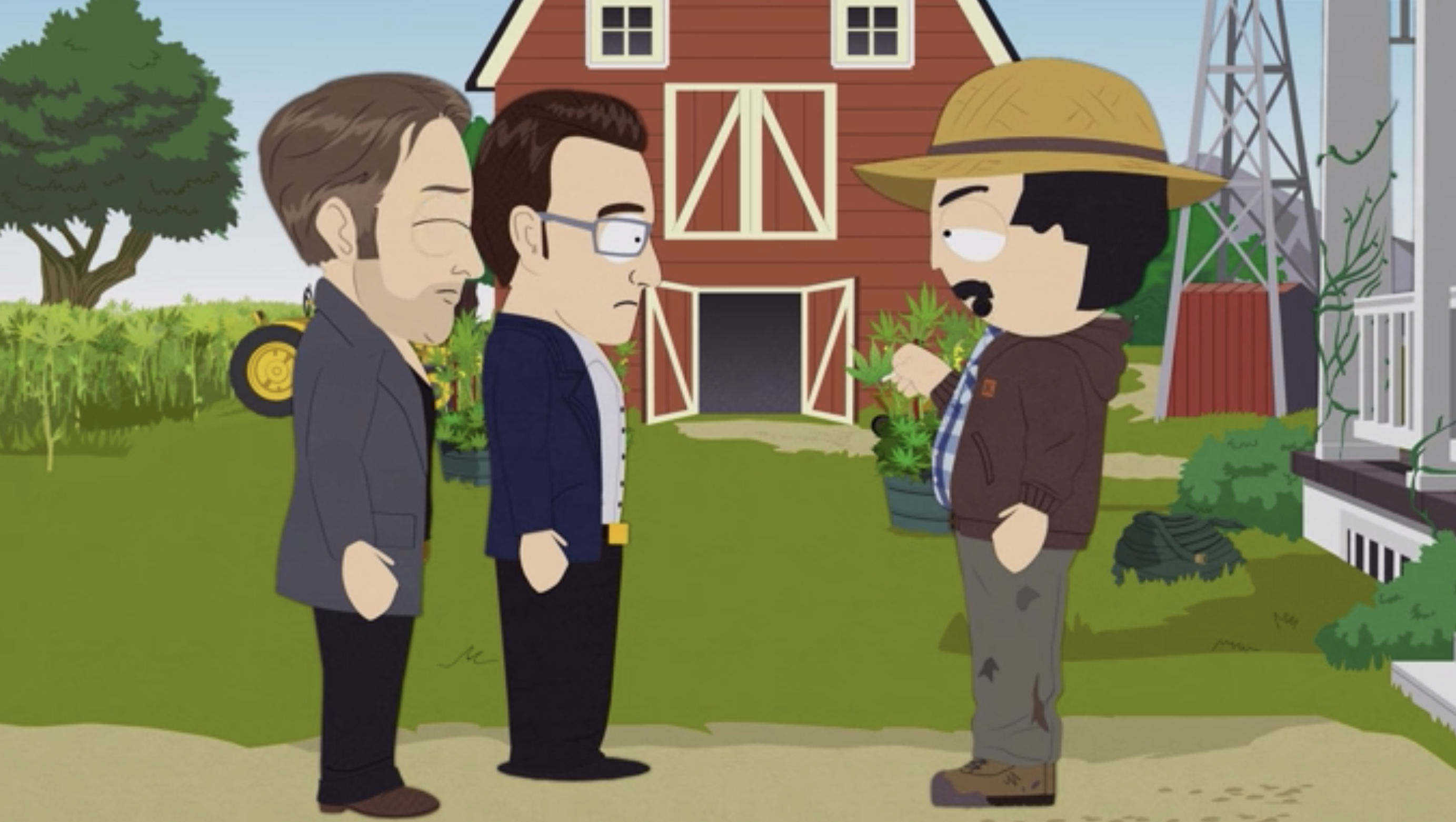 South Park took another hit at the marijuana dispensary chain MedMen in an episode that aired on Wednesday.

As sales start dropping at the fictional cannabis business “Tegridy Farms,” the owner, Randy Marsh, investigates and finds that former customers are increasingly cultivating their own marijuana.

“When you grow your own pot, you’re taking weed out of my children’s mouths,” he says.

He enlists his son Stan to testify in front of the City Council, raising fictitious concerns about the dangers of allowing home grow.

“What’s happened to our country? People are being wronged by a broken system and we must say no more. No more home grown marijuana,” Stan says. “As the son of a proud American farmer, I am concerned about what home grown can lead to.”

“People can grow weed wrong and poison themselves,” he continues. “Unscrupulous growers could use cheap irrigation and drown babies. The fact is simple, marijuana must be grown with Tegridy.”

When the local government declines to intervene, two people who explicitly identify as MedMen representatives show up at Stan’s farm.

Watch the episode in full here.

“We represent a billion dollar marijuana company. You seem to be fighting the same fight we are,” one representative says. “We just want to help you. Ever heard of MedMen?”

“We have a common problem: home grown weed,” he says, as the trio shares a joint.

“We’re just worried about safety, you know? Babies drowning in irrigation and such,” the other person adds.

Stan agrees that babies drowning is no good and anticipates the deal the company wants to offer.

“So you guys want to put all our money together and we go fuck this town up so nobody can ever grow their own weed again? I’m totally in,” he says.

Though deeply hyperbolic, the episode seems to draw from a real-life criticism of the marijuana company. MedMen was part of a New York-based medical cannabis association that sent a policy statement to Gov. Andrew Cuomo (D) last year, urging him not to allow a home cultivation option in legalization legislation—a request he ended up following in his proposal to lawmakers.

MedMen told Marijuana Moment at the time that it supports a home grow option but declined to answer specific questions about the company’s involvement in drafting the document.

In the actual policy statement, the association made arguments against home grow that appear to be the basis of the South Park jokes. For example, the groups expressed concerns that marijuana cultivated for personal use could contain noxious pesticides and other contaminates—though there wasn’t any language about babies drowning.

MedMen did not respond to a request for comment on the episode’s portrayal of the company by the time of publication.

In another scene, Tegridy Farms business partner Towelie asks Randy if he made “a deal with another weed company.” Here’s the exchange:

Randy: Yes, Towelie, I’m working on a merger with MedMen

Towelie: MedMen? But those guys are posers.

Randy: We have a deal in the works to put a stop to home growers once and for all.

Towelie: Jesus, I knew a guy once who thought weed should be for everybody—a guy who believed in integrity. I don’t understand who you even are anymore.

The scene ends with Randy asking what’s “wrong with trying to protect our business,” to which Towelie responds “weed isn’t supposed to be some money-grabbing business model” and that it’s “a gift from God and not something to be exploited by some stupid towel.”

This isn’t the first time South Park has appeared to knock MedMen.

In July, the show released a fictional ad for Tegridy Farms that contrasted its business model with that of a major marijuana corporation that resembles MedMen, though the company wasn’t mentioned by name. The ad is in the same style as a real one the MedMen released in partnership with filmmaker Spike Jonze in February.

MedMen is backing a proposed Florida marijuana legalization ballot initiative that makes no provision for home growing, but an Arizona measure it is helping to fund does allow for personal cultivation.