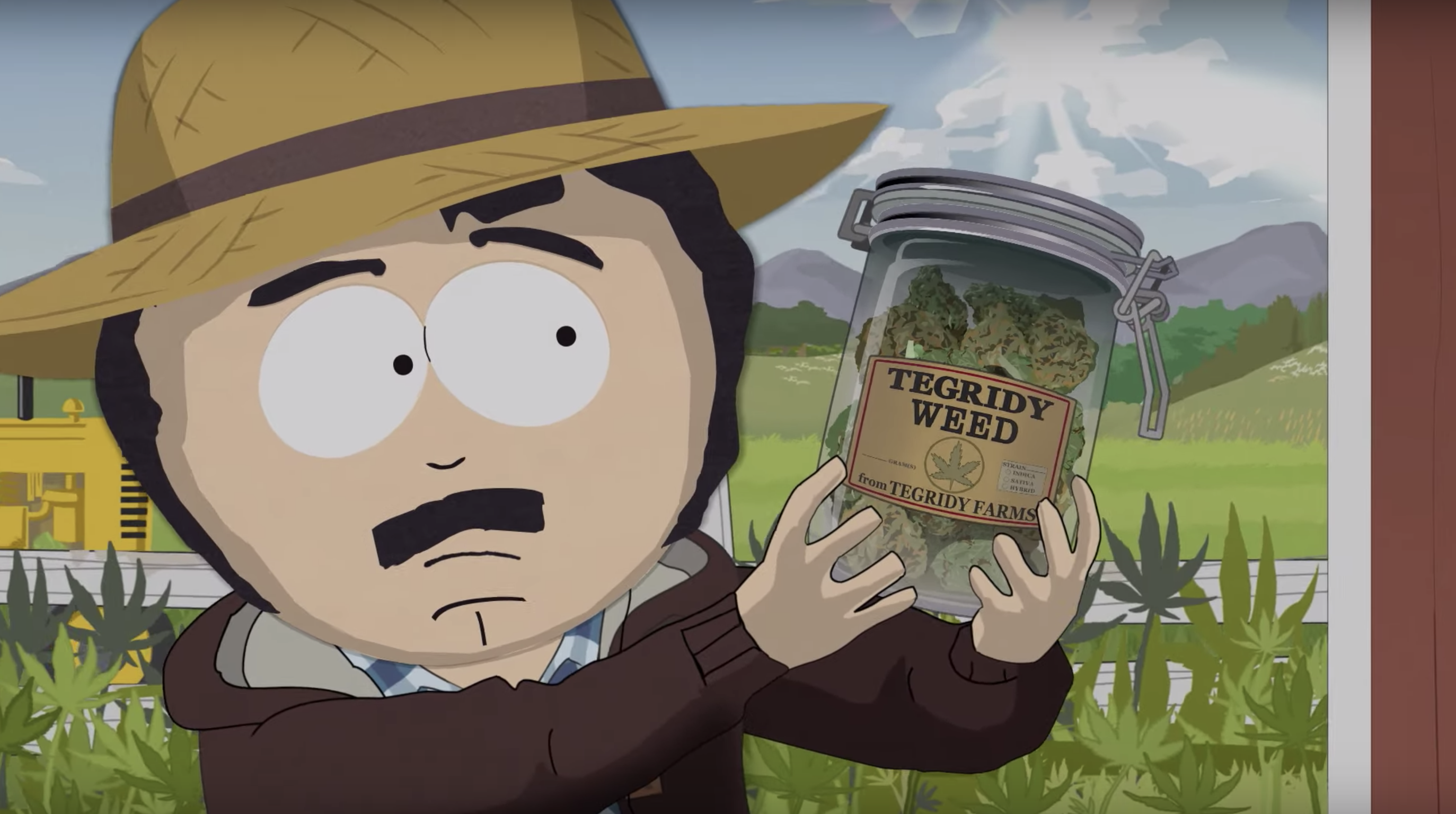 South Park took a jab at corporate marijuana in a clip released over the weekend—seemingly riffing off a slick ad that  MedMen published earlier this year—while promoting a fictional cannabis brand called “Tegridy Farms.”

While the segment doesn’t call out the multi-state dispensary chain MedMen by name, it appears to satirize a short film the company released in partnership with director Spike Jonze in February, which took a cinematic look at the history of cannabis prohibition and the growing normalization of the industry.

The South Park clip starts the same way as MedMen’s, discussing the cultivation of hemp by George Washington and the harms of the drug war. But then it shifts to a scene featuring marijuana executives celebrating, with charts in the background showing climbing profits from cannabis sales.

“And then a bunch of young corporate banker types come along telling us we’re all in the ‘new normal’ as they try to turn god’s green miracle into an easy buck for themselves,” the narrator says. “They even hire fancy Hollywood directors to make them look all hip and cool. But you know what? Fuck those guys. They ain’t got no integrity.”

For comparison, watch MedMen’s ad, titled “The New Normal,” below:

MedMen faced criticism from reform advocates after it was reported that the New York Medical Cannabis Industry Association sent a memo urging New York Gov. Andrew Cuomo (D) to keep home cultivation of marijuana illegal while the company was a member of the group.

In a statement to Marijuana Moment at the time, a MedMen representative said the company “respects the right of those who choose to cultivate cannabis for their personal use,” but declined to answer specific questions about its involvement in creating the policy memo.

The company also came under fire for racist and sexist comments its executives allegedly made, a situation that led to its being asked to cut ties with the New York trade association.

A MedMen representative did not return a request for comment on the new South Park clip by the time of publication.

There are some hints in the South Park clip that make it seem like the fictitious Tegridy Farms cannabis brand may morph into a real marijuana business at some point.

The segment comes a year after South Park released an entire episode dedicated to the brand and, in the time since, entities named Tegridy Farms LLC were officially registered in Colorado and Oregon, though it is unclear if one or both of those companies are controlled by South Park personnel or if they were simply inspired by the show.

Meanwhile, a page on the official South Park Tegridy Farms site shows that its creators bought up numerous inactive domain names, including one focused on a specific strain name—”Catotonic Tegridy Bud”—that was mentioned in last year’s episode.

Tegridy also made an appearance at Comic-Con in San Diego over the weekend, with a free branded t-shirt giveaway.

“The truth is this country has always been people with integrity, all fighting for the one thing they can agree on,” the clip continues. “And that’s why Tegridy is donating 100 percent of profits to charities that work to right the wrongs of the drug war until weed is legal nationwide.”

“You see, that’s Tegridy. Those other guys? No Tegridy,” the narrator says. “Do you want some fucking Tegridy? Don’t you wish everyone had some goddamn Tegridy? Well soon, everyone can.”

Marijuana Moment reached out to Comedy Central and an email listed on the Tegridy Farms website, but representatives did not respond by the time of publication.

SXSW Wants You To Submit Marijuana Panel Ideas For 2020 Event