As public support for marijuana reform continues to grow, more governors seem to be taking notice and adopting pro-legalization platforms, according to a gubernatorial scorecard released by the advocacy group NORML on Wednesday.

That said, while recent polling shows majority support for legalization among both Democratic and Republican voters, the issue remains deeply partisan at the gubernatorial level.

NORML’s annual scorecard ranks governors based on comments they’ve made about cannabis issues as well as their policy records. The group identified several key takeaways from this year’s report, such as an increased number of top state officials who received a passing grade of “C” or higher. 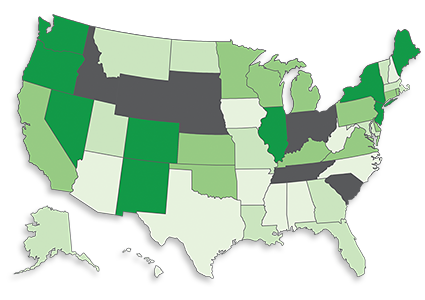 “Having a governor that is supportive of legalization can make all the difference in whether or not it becomes a priority topic on the legislative agenda and how much support will be rallied behind that effort,” Erik Altieri, executive director of NORML, told Marijuana Moment. “Even after a state approves legalization, it is clear that a pro-reform governor makes a huge difference when it comes to issues related to the expungement of prior records, fair regulations and workplace discrimination.”

Here are some highlights from the scorecard:

-Only nine governors received an “A,” all of whom are Democrats.

-Eight governors, all of whom are Republicans received an “F.”

As NORML noted, this partisan divide around cannabis reform isn’t totally consistent with polling of the general public. A Gallup survey released last year showed that 66 percent of Americans favor legalization. Although Democratic voters are significantly more likely to back legalization than are those who identify with the GOP, there is majority support across party lines.

“It is imperative that constituents know where their governor stands on marijuana law reform. Some can be pushed to be better and others will need to be voted out of office for being a roadblock to progress,” Altieri said. “We hope this scorecard serves as a tool for Americans to directly engage in the political process and put pressure on the leader of their state to join us on the right side of history.”

You can use NORML’s scorecard to see where your governor stands on cannabis here.

Another signal that marijuana reform is gaining popularity among governors is the frequency of cannabis policy mentions in their annual speeches and official legislative agendas.