The number of banks and credit unions that report working with marijuana businesses remained stable over the last quarter, according to recently published federal data.

For the last three quarters of 2020, those numbers had been consistently declining—due partly to revised reporting requirements from the Financial Crimes Enforcement Network (FinCEN) and also because of the coronavirus pandemic. But things seem to have stabilized over the most recent two quarters.

As of March 31, there were 684 banks and credit unions that filed reports saying they were working with cannabis clients. That’s the exact same number from the previous quarter, though it’s still down from a peak of 747 in late 2019.

A major reason for the prior decline last year is because FinCEN, which is part of the Treasury Department, stopped including hemp-only businesses in their quarterly reports since the crop was federally legalized under the 2018 Farm Bill—which accounts for at least part of the dip as compared to prior figures that counted hemp-focused accounts.

“The number of depository institutions (DIs) banking marijuana-related businesses (MRBs) appears to have leveled off from a decline that started at the end of the 1st Quarter FY2020 (December 2019),” FinCEN said in its latest quarterly analysis. “The decline coincided with the release of guidance by FinCEN and financial regulators on providing financial services to customers engaged in hemp-related business activities.”

Another factor in the prior dip could have been the COVID-19 pandemic, which “may be adding to this apparent decline due to state imposed restrictions or closures and potential delays in SAR filings,” the federal agency continued. 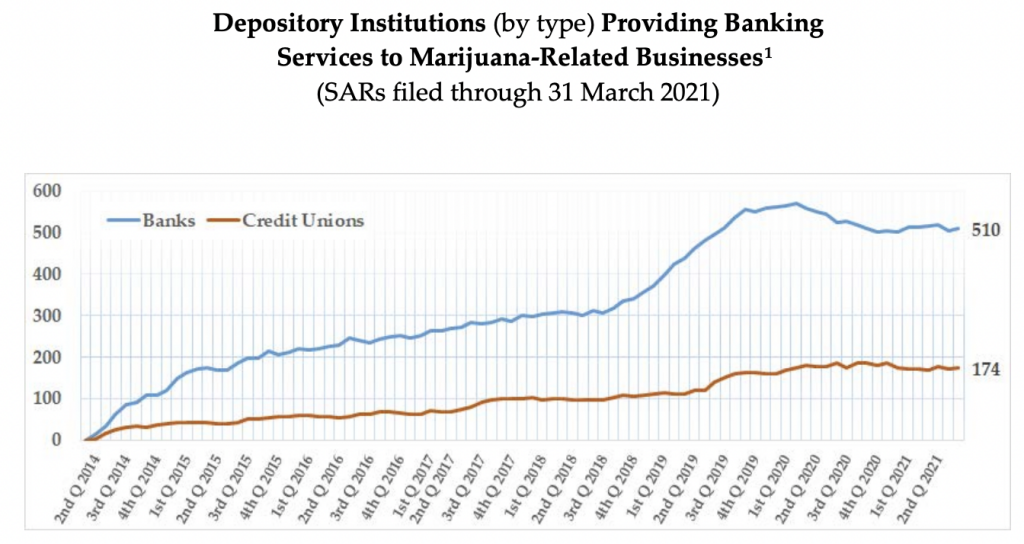 Under FinCEN guidance issued by the Obama administration in 2014 that remains in effect, banks and credit unions are required to submit SARs if they elect to provide financial services to marijuana businesses. In the years since, the number of depositories taking on marijuana clients has gradually increased—until the more recent downward trend.

As of the end of last quarter, there were 510 banks and 174 credit unions reporting active marijuana clients.

But while the number of banks and credit unions seem working with the cannabis market seems to be stabilizing for now, that trend could shift significantly upwards if congressional legislation to protect those institutions from being penalized by federal regulators is approved.

The House for the fourth time approved the Secure and Fair Enforcement (SAFE) Banking Act in April.

However, its prospects remain in question in the Senate.

Sen. Cory Booker (D-NJ), for example, said last week that he “will lay myself down” to block any other senators who seek to pass marijuana banking legislation before the body approves comprehensive cannabis reform like the federal legalization bill he recently unveiled alongside Senate Majority Leader Chuck Schumer (D-NY).

Last month, Sens. Jeff Merkley (D-OR) and Steve Daines (R-MT), sponsors of the Senate version of the SAFE Banking Act, urged a markup of legislation, arguing that it would help address an urgent public safety issue.

But Senate Banking Committee Chairman Sherrod Brown (D-OH) has also made clear he’s not eager to advance the legislation, saying in April that “I think we need to look at a number of things,” and that the body is “not ready to move on it.”

As it stands, the banking legislation has 39 cosponsors in the Senate, in addition to lead sponsor Merkley, which means more than a third of the chamber is already formally signed on.

The legislation would ensure that financial institutions could take on cannabis business clients without facing federal penalties. Fear of sanctions has kept many banks and credit unions from working with the industry, forcing marijuana firms to operate on a cash basis that makes them targets of crime and creates complications for financial regulators.

After it passed the House last Congress, advocates and stakeholders closely watched for any action to come out of the Senate Banking Committee, where it was referred after being transmitted to the chamber. But then-Chairman Mike Crapo (R-ID) did not hold a hearing on the proposal, despite talk of negotiations taking place regarding certain provisions.

When legislative leaders announced that the SAFE Banking Act was getting a House vote in 2019, there was pushback from some advocates who felt that Congress should have prioritized comprehensive reform to legalize marijuana and promote social equity, rather than start with a measure viewed as primarily friendly to industry interests.

Rep. Earl Blumenauer (D-OR), co-chair of the Congressional Cannabis Caucus and an original cosponsor of the bill, said in March that the plan was to pass the banking reform first this session because it “is a public safety crisis now,” and it’s “distinct—as we’ve heard from some of my colleagues—distinct from how they feel about comprehensive reform.”