The number of banks and credit unions that report servicing marijuana businesses seems to be stabilizing, according to new federal data.

For three quarters in a row, those numbers were consistently declining—due partly to revised reporting requirements from the Financial Crimes Enforcement Network (FinCEN) and also because of the coronavirus pandemic. But the latest report signals that the trend is lifting.

As of December 31, there were 684 banks and credit unions that filed reports saying they were working with cannabis clients. That slightly up from the previous quarter, though it’s still down from a peak of 747 in late 2019.

A major reason for the steady decline in the months since is because FinCEN, which is part of the Treasury Department, stopped including hemp-only businesses in their quarterly reports since the crop was federally legalized under the 2018 Farm Bill—which accounts for at least part of the dip as compared to prior figures that counted hemp-focused accounts.

FinCEN said the number of banks that work with marijuana businesses “appears to have leveled off from a decline,” but it still noted the impact of the pandemic on the latest figures.

“The decline coincided with the release of guidance by FinCEN and financial regulators on providing financial services to customers engaged in hemp-related business activities,” the report states. “The COVID-19 pandemic may be adding to this apparent decline for two reasons.”

Those reasons are: 1) some cannabis businesses may have closed down because of state restrictions amid the health crisis and 2) “reduced staffing” at financial institutions could have affected how many Suspicious Activity Reports (SAR) were filed. 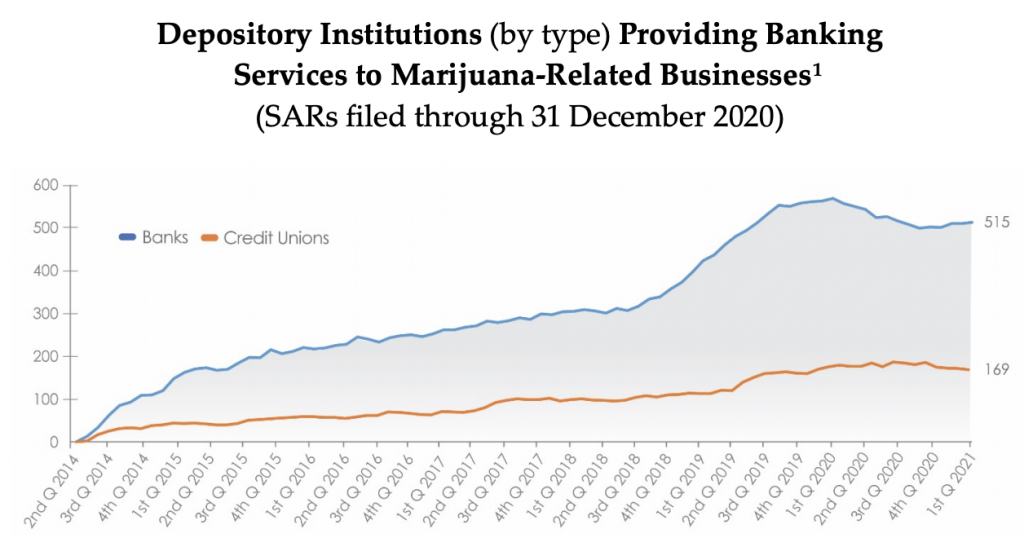 That said, most states allowed cannabis companies to continue to operate as essential services during the pandemic, and states like Illinois have continued to see record-breaking sales despite the public health emergency.

Under FinCEN guidance issued by the Obama administration in 2014 that remains in effect, banks and credit unions are required to submit SARs if they elect to provide financial services to marijuana businesses. In the years since, the number of depositories taking on marijuana clients has gradually increased—until the more recent downward trend.

As of the end of last quarter, there were 515 banks and 169 credit unions reporting active marijuana clients.

But while the number of banks and credit unions seem working with the cannabis market seems to be stabilizing for now, that trend could shift significantly upwards if congressional legislation to protect those institutions from being penalized by federal regulators is approved.

That could happen in one of several ways this session, with Democrats in control of both chambers of Congress.

Lawmakers could approve a measure like the Secure and Fair Enforcement (SAFE) Banking Act—which cleared the House as standalone legislation and twice as part of COVID relief packages last year—or they could vote to federally legalize marijuana.

A plan to accomplish the latter is in the works on the Senate side, where Majority Leader Chuck Schumer (D-NY), Finance Chairman Ron Wyden (D-OR) and Sen. Cory Booker (D-NJ) are in the process of crafting a bill to end cannabis prohibition and have already met with advocacy organizations on the best way to approach the reform.

Democratic leadership in the House, meanwhile, declined to put language from the SAFE Banking Act in their latest coronavirus bill.

It’s also possible that some administrative changes within Treasury could be on the horizon as Congress moves to advance reform legislation.

Last month, a senator recently pressed President Joe Biden’s nominee for a top Treasury Department role on revising banking rules for marijuana businesses. Adewale Adeyemo was asked whether he feels 2014 Financial Crimes Enforcement Network (FinCEN) guidance should be updated to “set expectations for financial institutions that provide services to cannabis-related industries” and what steps he would take to that end.

“I look forward, if confirmed, to talking to my colleagues at Treasury about this important issue and thinking through what changes may be needed and doing this in a way that’s consistent with the interagency with the president’s guidance,” he said.

Separately last month, Internal Revenue Service Commissioner Charles Retting told a House committee that his agency would prefer marijuana businesses be able to get bank accounts so they could pay their taxes electronically instead of with cash.