The number of banks and credit unions that service the marijuana industry largely leveled off in the last quarter, according to new federal data released late last week. And that market trend could reflect shifting expectations among financial institutions about the likelihood of Congress approving cannabis banking legislation.

While the House did eventually pass the Secure and Fair Enforcement (SAFE) Banking Act, which would shield banks that accept marijuana business clients from being penalized by federal regulators, that vote happened just five days before the end of the fourth quarter of the federal fiscal year and not prior to the summer recess weeks earlier, as had previously been expected.

Marijuana Moment first reported that a vote was imminent about two weeks prior to the House action.

It’s possible that banks were waiting to see the congressional action before further servicing the market and were disappointed that the Democratic-controlled chamber did not act on the legislation before lawmakers broke for the summer break. Previous quarters have seen significant upticks in the number of banks and credit unions working with marijuana businesses, especially since the end of 2018.

But this last quarter, the Financial Crimes Enforcement Network (FinCEN) reported that 563 banks and 160 credit unions were serving cannabis companies as of September 30, compared to 553 banks and 162 credit unions at the end of the previous quarter. That’s a small increase for banks and a slight dip for credit unions, signaling a shift in pace as lawmakers work to get the bipartisan banking bill to the president’s desk. 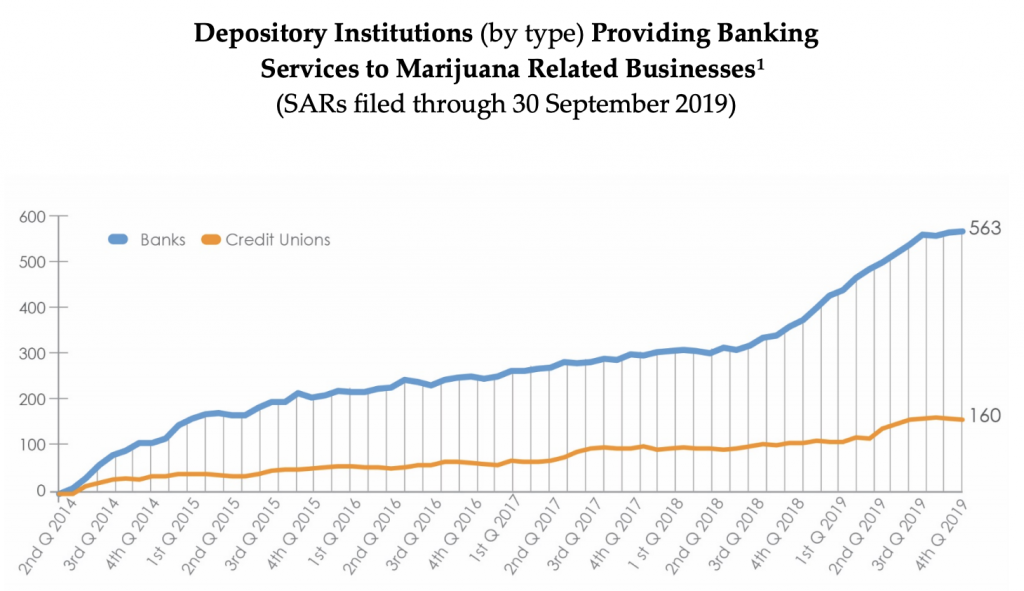 But now that the House has acted, and signals point to the Senate following suit, industry watchers are bullish about getting the key reform across the finish line this Congress.

“I get the sense that people in the financial community are optimistic about the chances of cannabis banking reform happening in the near future from our work with groups like the [American Bankers Association] and [Credit Union National Association] on the SAFE Banking Act,” Morgan Fox, media relations director for the National Cannabis Industry Association, told Marijuana Moment.

FinCEN also said that short-term declines in these numbers “may be explained by filers exceeding the 90 day follow-on Suspicious Activity Report (SAR) filing requirement,” a process that banks are mandated to follow in accordance with 2014 cannabis banking guidance issued under the Obama administration.

“Several filers take 180 days or more to file a continuing activity report,” the agency said. “After 90 days, a depository institution is no longer counted as providing banking services until a new guidance-related SAR is received.”

Those caveats were also included in previous quarterly reports that had shown increases in the number of financial institutions working with the cannabis industry, however.

The latest update also contains data on the number of marijuana-related SARs that have been filed, which exceeded 100,000 for the first time as of the quarter’s end. (There appears to be a mistake in the narrative of FinCEN’s report, as it states the numbers reflect SARs filed by the end of June instead of September.) 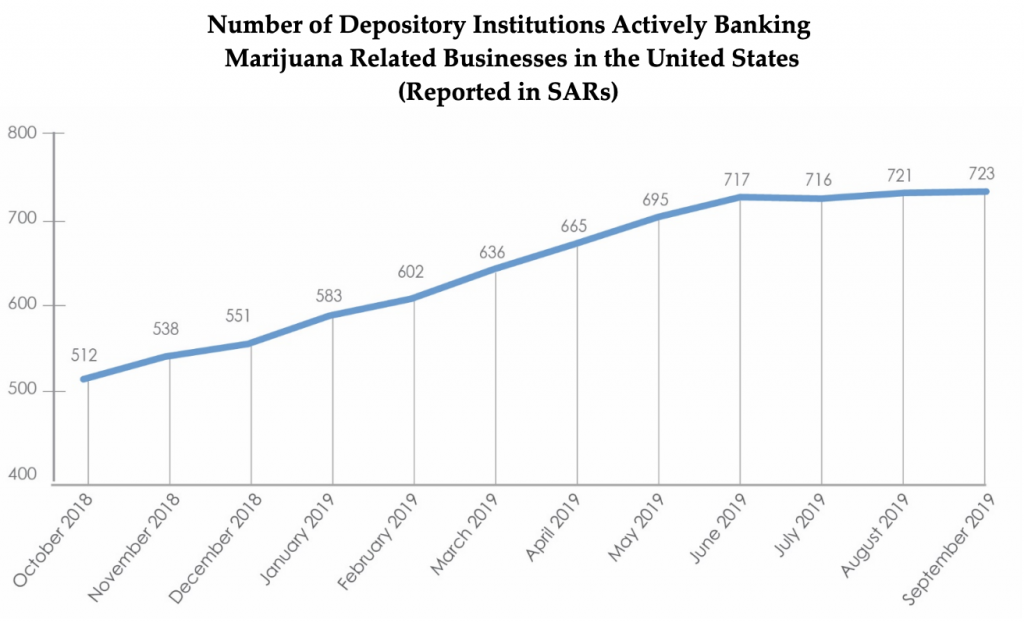 As usual, most (76,203) were considered “marijuana limited,” which refers to cannabis businesses that seem to be operating in compliance with state law, and therefore meet the agency’s standard for being serviceable under existing federal guidelines.

The second largest category was for “marijuana termination” SARs, or marijuana businesses that violated at least one federal enforcement priority or state regulation and so “the financial institution has decided to terminate its relationship with” the firm.

About 7,800 SARs fit the definition of “marijuana priority,” which is defined as a business that “may raise one or more of the red flags” under federal guidelines, or they “may not be fully compliant with the appropriate state’s regulations” and so they’d be under investigation.

Whether the leveling off trend will continue is yet to be seen. However, if the Senate does advance the SAFE Banking Act and it is enacted, advocates expect a surge in banks embracing the cannabis industry. The chair of the Senate Banking Committee has said that his panel will vote on marijuana banking legislation before the year’s end, though he suggested he’d like certain changes from the House-passed version.