New Jersey voters seem primed to approve a marijuana legalization referendum in November, according to another new poll released on Friday.

But this one from Fairleigh Dickinson University demonstrates just how widespread that support is across demographics. A majority of Democrats (71 percent), Republicans (52 percent) and independents (57 percent) said they would vote in favor of the referendum. 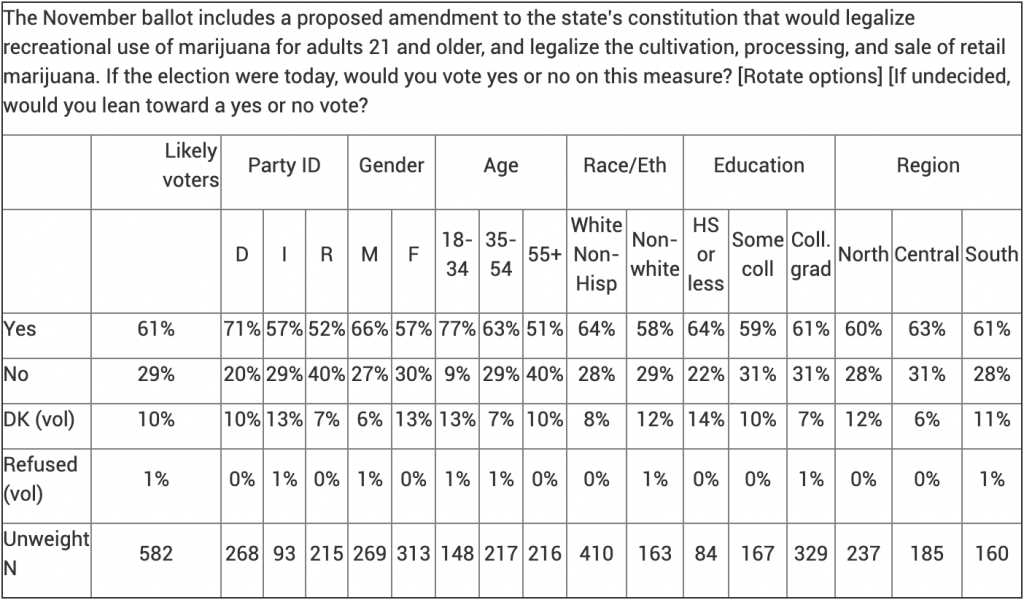 Under a separate analysis, the poll also shows that most registered voters, in addition to likely voters, back the proposal.

“Public opinion on this issue has evolved considerably. Just a few years ago, in 2018, we asked about recreational marijuana legalization and found support that was well beneath a majority, let alone anything that approached the support we’re seeing today,” Krista Jenkins, the university’s poll director, said in a press release. “Back then, 42 percent support what is being proposed today. The legislative maneuver to give voters the say looks like it will wind up with a decisive pro-pot outcome.”

That’s been the plan since lawmakers failed to pass a legalization bill last session. And Gov. Phil Murphy (D) doesn’t intend to squander the opportunity that a referendum question represents.

He said during a virtual fundraiser with the pro-legalization NJ CAN 2020 on Thursday that the state “can’t fail” at enacting the policy change this round. A top lawmaker also spoke at the event and said an enabling and regulatory bill was being prepared in anticipation of a favorable vote, and that it could be voted on by the legislature as soon as the first week of November.

The governor also recently recorded a video ad that was released by the reform group, outlining why he’s embraced the policy change. Murphy said that the ongoing criminalization of cannabis in New Jersey wastes taxpayer dollars, and he emphasized that prohibition is enforced in a racially disproportionate manner.

Last month, Murphy also called on voters to support the proposal in an email blast that was circulated by the New Jersey Democratic State Committee.

“Legalization would right those wrongs while also spurring massive economic development opportunities, job creation, and new tax revenue,” the governor wrote. “Now, we have the opportunity to get this done and finally legalize adult-use marijuana here in the Garden State, and I need your help to make it happen.”

The governor isn’t alone in his attempts to get out the vote for cannabis reform. Filmmaker Kevin Smith last week urged his Twitter followers to “VOTE YES when you see State Public Question Number 1: Constitutional Amendment to Legalize Marijuana.”

Legislators attempted to enact the policy change during the last session, but when negotiations stalled, they opted to put the question to voters in the form of a referendum. If the measure is approved on Election Day, the legislature will then have to pass implementing legislation containing details for how the legal cannabis market will work.

In June, the state Assembly passed a cannabis decriminalization bill that would make possession of up to two ounces a civil penalty without the threat of jail time, though it hasn’t advance in the Senate.