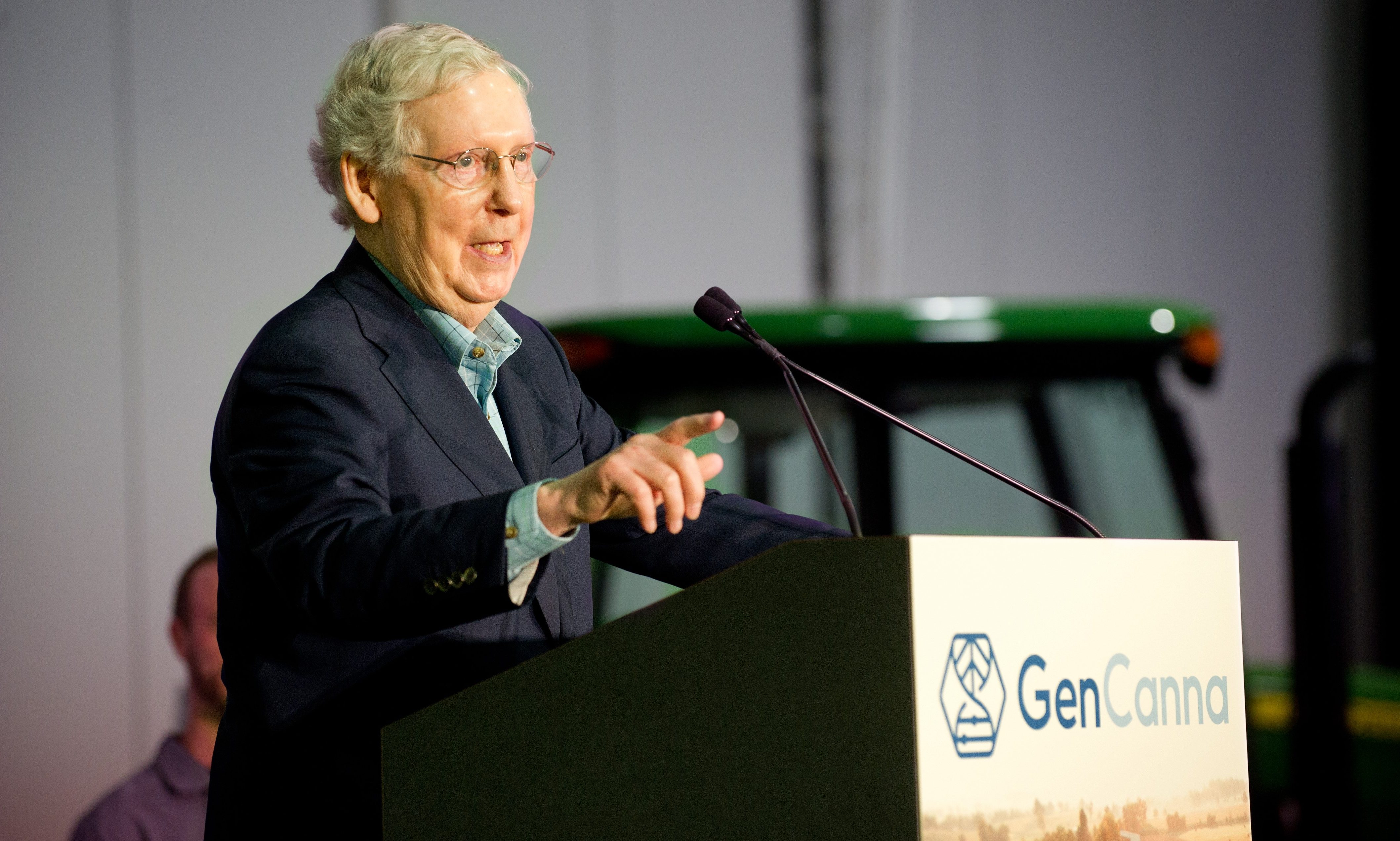 Senate Majority Leader Mitch McConnell (R-KY) toured a Kentucky hemp company on Tuesday—the latest victory lap for the senator, who is hoping his role in federally legalizing the crop through last year’s Farm Bill will turn out voters to support his 2020 reelection bid.

Kentucky Agriculture Commissioner Ryan Quarles joined McConnell on the visit to GenCanna’s Hemp Research Campus, which is one of the state’s first facilities to participate in an industrial hemp pilot program that the senator helped launch as part of an earlier 2014 Farm Bill.

“Touring GenCanna’s cutting-edge hemp facility, Commissioner Quarles and I had the chance to see firsthand the innovation happening here in the Bluegrass State,” McConnell said in a press release. “When President Trump signed my legislation to fully legalize hemp and take it off the federal list of controlled substances last December, I knew Kentucky would be at the forefront of hemp production. It didn’t take long for GenCanna to prove me right.”

“The pioneering work done here is advancing hemp’s remarkable potential to grow our economy and create good jobs,” he said.

I was glad to join @senatemajldr for a tour of @GenCanna, one of the many hemp processors in our commonwealth. With more than $57 mil. reported in gross product sales in 2018, I'm confident we are on our way to making KY the place to grow and process hemp. #KyAg365 pic.twitter.com/zYWS3Ip4Cp

In the last week, McConnell has gone to great lengths to tout the hemp legalization provision of the 2018 Farm Bill. The accomplishment was featured prominently in a reelection launch video that his team released, and he also said in a speech that it was at “the top of the list” of reasons voters should reelect him in 2020.

“Kentucky is making a hemp comeback thanks to the tireless work of Senator McConnell,” Matty Mangone-Miranda, CEO of GenCanna, said. “His work to make hemp legal has opened up an entire new industry in the United States and Kentucky is poised to lead the way.”

At an event at @GenCanna , @KYAgCommish Ryan Quarles thanks @senatemajldr for “making hemp great again” pic.twitter.com/t1CYnHFZb0

To some hemp producers, the implementation of the hemp legalization provision has been too slow-moving. While they can still cultivate and market hemp and its derivatives under the 2014 pilot program, the U.S. Department of Agriculture (USDA) must develop its own regulatory framework before the crop’s full potential can be realized.

States can submit their own regulatory plans in the meantime, but USDA must develop its regulations before approving those plans.

To that end, McConnell is putting pressure on federal regulators to ensure a smooth rollout. He said it was possible he’d introduce standalone legislation to resolve any “glitches” that emerge in the regulatory process, and he also urged Agriculture Secretary Sonny Perdue to implement the legalization provision “expeditiously” and “as Congress intended.”

Perdue has repeatedly acknowledged those requests, but said that the department does not plan to rush the development of federal regulations. USDA is “taking this slow,” he said earlier this month, but the plans should be in place in time for the 2020 planting season.